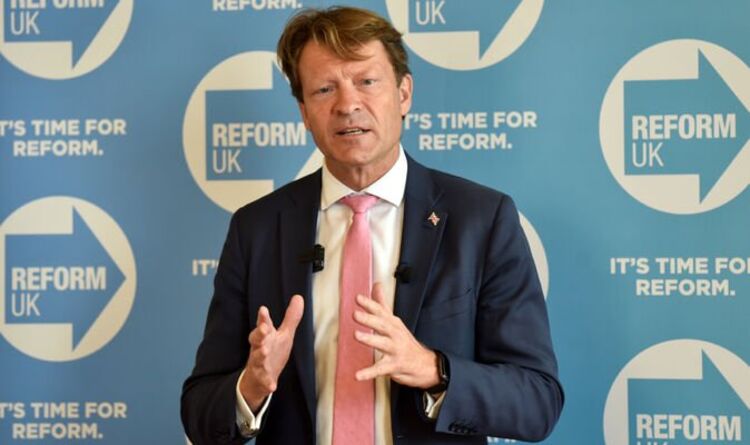 The Brexiteer and Reform UK leader warned the Conservative Party could become split over the impending climate crisis as it “will become as big as Brexit or bigger” in the months ahead. Mr Tice said the Tories are “out-of-touch” with their voters over climate change as he announced his plan to exploit this in the upcoming local elections.

He told The Daily Telegraph: “It will be a seismic crisis for them because of what will happen to people’s bills.

“Some Tories in the shires get bamboozled by the green lobby. But most of the members are completely in our camp – cut taxes, go for growth, become self-reliant and use our own shale gas.”

Mr Tice, who replaced Nigel Farage as Reform UK leader, said his party would focus on Red Wall voters as he warned “millions of people” will not able to pay their bills if the Government doesn’t act.

Families across the UK have been crippled by rising bills for food, goods and travel as the Government looks to reducing Britain’s carbon footprint.

Reform UK will have around 120 candidates standing in the local elections and a candidate in the Wakefield by-eleciton after the resignation of Imran Ahmad Khan, who was found guilty of child sex offences.

Mr Tice added: “We will be the only candidate there campaigning on a manifesto of cutting taxes hard now, for shale gas, and the best way to level up is to use your own energy.

“In a sense this is the first Red Wall seat that has come up – we will be going for it very hard.”

But the Tories are suffering from the surging cost of living crisis crippling Britons across the country.

DON’T MISS
Eco-idiots are doing more to save Putin than save the planet [COMMENT]
Energy crisis: Plan to replace boilers with heat pumps to cost £115bn [INSIGHT]
Tories at risk of losing voters if it weakens net-zero targets [WARNING]

With rampant inflation, skyrocketing energy prices and interest rates creeping up, Mr Sunak has faced backlash for not doing more to help hard-working families up and down the country.

In signs of divisions within the party, Tory MPs are frustrated at the high level of taxes being imposed by the Government, with the tax burden at its highest level since the 1940s.

At the same time, living standards are set to drop to the lowest level since the 1950s according to the Office for Budget Responsibility.

Mr Sunak is facing demands to increase handouts to help those struggling with the current cost of living crisis as well as demands to curb Government spending to bring down taxes.