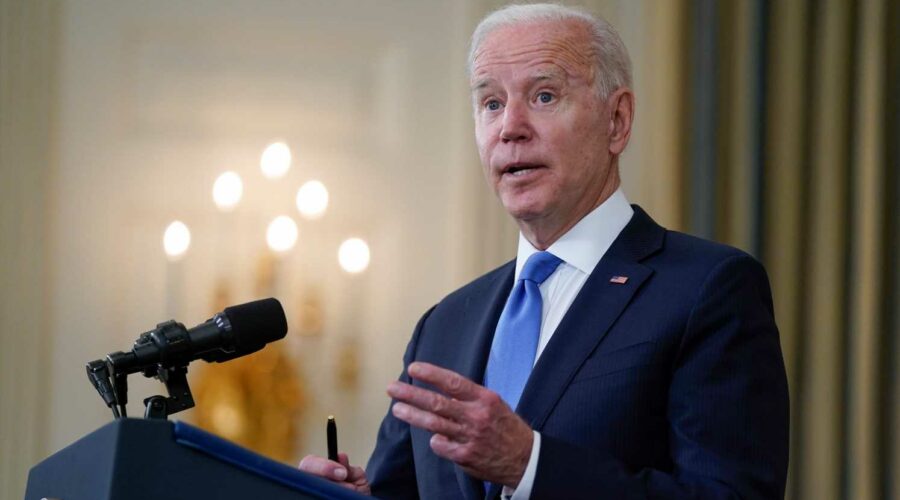 It could mark the final stab at a bipartisanship deal on infrastructure before Biden’s self-imposed Memorial Day deadline for progress. With the two sides still far apart, some Democrats say the time is nearing for Biden to try to pass an infrastructure package without Republican support through a legislative maneuver called reconciliation.

Republican senators leading the talks with Biden’s administration said Tuesday they would release a nearly $1 trillion counteroffer Thursday, up from an initial $568 billion GOP counter plan put forward earlier this month. It comes after Republicans on Friday rejected Biden’s trimmed-down $1.7 trillion American Jobs offer that cut $550 billion out of his original $2.3 trillion plan.

Sen. Roger Wicker, R-Miss., said the upcoming counteroffer would keep former President Donald Trump’s 2017 tax cuts intact – avoiding corporate tax increases proposed by Biden – and instead repurpose already-approved COVID-19 relief funds to pay for repairs to road and bridges, broadband expansion and other infrastructure. He characterized the price tag as matching what Republicans have discussed in close-door meetings with the president, although the White House disputed that Biden gave them his support.

“We’re going to hit a figure very close to what the president said he would accept, and it will end up being the most substantial infrastructure bill ever enacted by the federal government,” Wicker said. “If the president gets to make the decision, he will accept it.”

Biden press secretary Jen Psaki said the White House looks forward to receiving the proposal and expressed optimism an agreement can still be reached. Biden and Democrats have said they hope a bill will be passed this summer.

“Our view is that this can be a week of progress, including the counteroffer which we expect to get later this week,” Psaki said. “I’m not going to pre-judge what that looks like. We’ll have to look at the nitty-gritty details. Certainly, them coming up in funding is progress.”

She disputed assertions from Wicker and other Republicans that the White House staff have gotten in the way of assurances the president has made to them during their talks. Psaki said Biden “oversees and directs his team” during negotiations.

“He signed off on the proposal that was put forward on Friday, which he felt – and we all felt – was a reasonable counteroffer,” Psaki said.

President Joe Biden has said he wants to see progress on an infrastructure bill by the end of May. (Photo: Evan Vucci, AP)

‘We’re not quite there yet,’ White House says of reconciliation strategy

Without a deal after weeks of negotiations between the White House and a group of six Republican senators, Democrats are increasingly talking about Biden going it alone with only Democrats to seek passage of his sweeping proposal.

“We’re getting down to decision time,” Senate Democratic Whip Dick Durbin, D-Ill., said Monday. “We can’t put this (off) indefinitely.”

“We just have to decide whether bipartisanship is going to work and be honest if it isn’t,” Durbin said, adding he would be “reluctant” to agree to anything lower than Biden’s $1.7 trillion offer on the table.

Haunting Democrats are 2009 negotiations between then-President Barack Obama and Senate Republicans on the Affordable Care Act, which brought in no Republican votes despite concessions on the landmark health care law. Senate Majority Leader Mitch McConnell said this month he is “100%” focused “on stopping” the Biden administration.

Sen. Sheldon Whitehouse, D-R.I., told Politico he believes McConnell’s “ultimate purpose is not compromise but delay and mischief.” He said Biden is “entitled to his judgment on this but if I were in a room with him, I’d say it’s time to move on.”

Sen. Richard Blumenthal, D-Conn., said there’s still time for negotiations but that a decision on ending talks has to come soon: “I think we’re reaching the point of fish or cut bait.”

Biden and Democrats could seek to pass the American Jobs Plan in the evenly divided Senate using budget reconciliation, a process subject to certain rules but that would allow Democrats to approve a bill with a simple 51-vote majority without any Republican support. Otherwise, Democrats would need the backing of at least 10 Republicans to overcome a legislative hurdle called a filibuster in order to bring the plan to a vote.

Biden is scheduled to released his budget blueprint Friday. The Senate Budget Committee chairman, Sen. Bernie Sanders, I-Vt., said Monday he would move quickly after that on a potential reconciliation measure.

“I think the clock is ticking, and if the Republicans are not serious, we’ve got to go forward.”

Such a path would mirror how Biden won approval of his $1.9 trillion COVID-19 rescue plan in March after talks with Republicans fizzled. But for now, the White House said it is not focused on reconciliation to pass for infrastructure.

“We’re not quite there yet. We’re still talking to Republicans,” Psaki said. “Hang in.”

In his $1.7 trillion counteroffer, Biden proposed minor concessions to remove funding for research and development, supply chains, manufacturing and small businesses. It would also reduce $100 billion for broadband expansion to $65 billion, matching what Republicans have proposed, and cut funds for roads and bridges.

Yet the trimmed-down plan would still keep corporate tax increases that Republicans have said they won’t support under any circumstances. It would also fund home caregiving for elderly and disabled people, electric vehicle expansion and other “social infrastructure” components that Republicans oppose. Republicans have said they only support spending on physical infrastructure such as roadways, bridges, ports, airports and broadband internet.

Sen. Shelley Moore Capito, R-W.Va., who is leading Republican talks, told reporters that after an in-person meeting with Biden on May 12, Republicans were under the impression that “social infrastructure is off.”

“They didn’t take any of that off,” Capito said, acknowledging Tuesday the two sides “remain pretty far apart” but added “there’s always hope.”

Manchin, a moderate Democrat and critical swing vote, told reporters Tuesday he also prefers separating traditional infrastructure into its own bill to get bipartisan support but understands the president is “looking at the whole enchilada.” He said the White House is “receptive” to the approach.

“We don’t have to,” Manchin said of passing a bill via reconciliation.

But Sen. John Barrasso, R-.Wyo., said the parties are “still very far apart.” Like other Republican senators, he said they appeared close to a deal after meeting with Biden, calling the administration’s $1.7 trillion counteroffer “a retreat.”

25/05/2021 Politics Comments Off on ‘The clock is ticking’: Democrats grow restless with Biden’s infrastructure talks as Republicans float next counteroffer
Markets