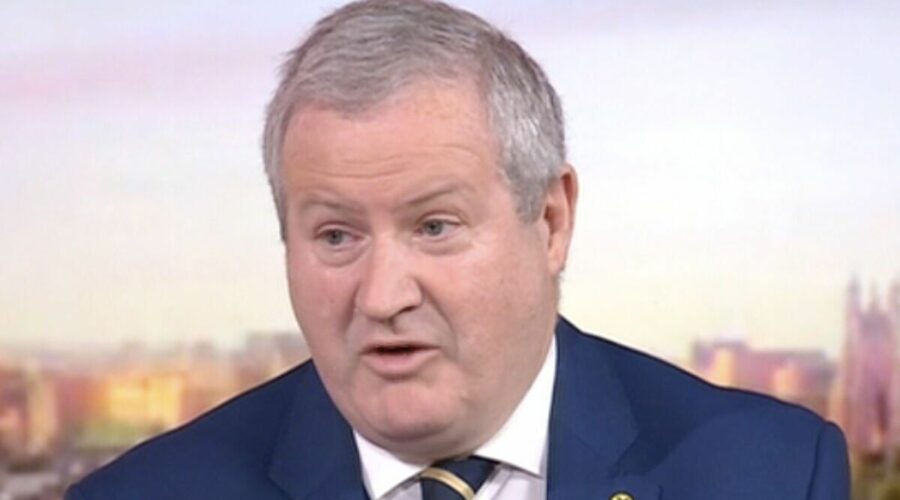 Ian Blackford squares off with Greens over NATO membership

The governing Holyrood coalition is heading towards crisis over the issue of NATO as Ian Blackford set up a dramatic showdown with the Scottish Greens. Mr Blackford doubled down on SNP support for an independent Scotland to join NATO, particularly in the wake of the Ukraine invasion. However, the SNP’s governing coalition partners, the Scottish Greens, are vehemently opposed to NATO and have demanded an immediate withdrawal.

Last month, the Greens refused to reconsider their position in the wake of devastating Russian aggression.

At the time, Scottish Conservative MSP Donald Cameron said that the Greens’ NATO position meant the SNP had “brought extremists into the heart of the Scottish Government who would rather we were less safe and secure than at present with the UK as a key part of the defensive alliance of NATO”.

This morning, BBC’s Sophie Raworth asked the SNP Westminster leader: “Are you comfortable governing Scotland in coalition with a party, the Scottish Greens, that wants us to withdraw from NATO?”

“We want an independent Scotland to be part of NATO. We stand shoulder to shoulder with our allies.”

Ms Raworth continued to grill the senior SNP figure: “How do you square that with the party you are governing with?”

The SNP MP dodged the question, saying: “I had party colleagues over in Brussels meeting with NATO officials this week so there is no question that our destiny is to be an independent country within NATO.”

The Russian invasion of Ukraine has already forced several European counties to re-examine their security agreements.

Both Sweden and Finland – who are not members of NATO – have moved towards joining the defensive alliance this year.

During the trip, the SNP defence spokesman Stewart McDonald said: “As Europe’s security debate evolves at pace in the shadow of intensified Russian aggression in Ukraine, it is vital that we as parliamentarians obtain a deeper understanding of how the security picture is changing.

“Not least in our own northern-European neighbourhood where it looks likely Sweden and Finland will soon formally apply for NATO membership.”

While both the SNP and Greens are opposed to nuclear weapons, the SNP dropped its opposition to NATO ten years ago.

@LCDK_UK posted online after the interview: “Blackford wants to withdraw the Trident equipped submarines from the Clyde as he thinks it makes Scotland a target.

“Yet he also wants an independent Scotland to be in NATO. Hasn’t a clue about defence.”

Also in the interview, Mr Blackford reiterated SNP plans to hold a second vote on Scotland’s position in – or out of – the United Kingdom in 2023.

While Boris Johnson has pushed back against the idea he described as “irresponsible,” Scottish nationalists insist a vote is necessary because of Brexit.