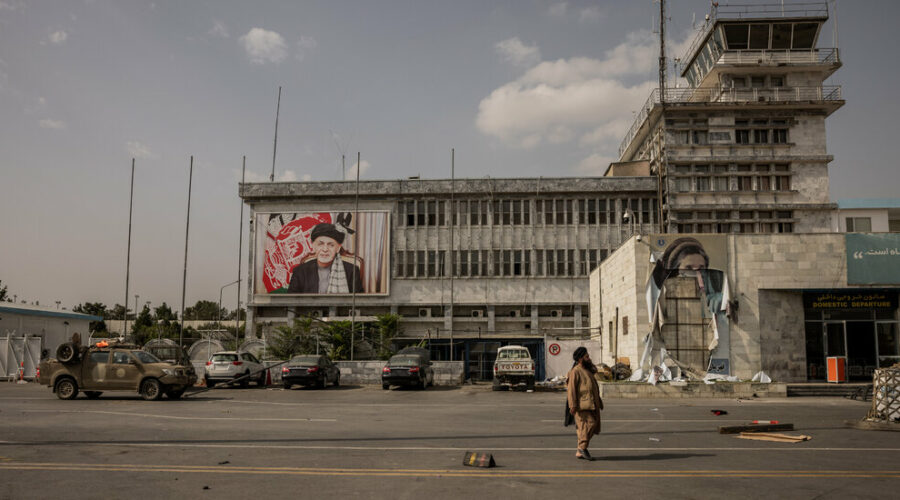 WASHINGTON — For more than a week, Samiullah Naderi, a U.S. legal permanent resident, waited days and nights with his wife and son outside the airport in Kabul, Afghanistan, hoping to be let in so that they could leave on one of the dozens of daily flights headed to America.

“It’s 50 feet away,” Mr. Naderi, 23, known as Sammy, said Sunday night in a short telephone interview, speaking in halting English, as gunfire crackled in the background. “Maybe the Taliban will let me inside — maybe.”

But on Monday, after being told that no more people would be allowed inside the airport gate, Mr. Naderi and his family returned to their apartment in Kabul with no clear path back to Philadelphia, where he has been living since last year.

“All flights are closed,” he said with an incredulous laugh. “I am scared.”

Mr. Naderi is among at least hundreds of U.S. citizens and potentially thousands of green card holders who are stranded in Afghanistan at the end of a 20-year war that culminated not in a reliable peace, but with a two-week military airlift that evacuated more than 123,000 people.

The evacuations continued through the last U.S. military flight out of Kabul, which departed Monday night, as the Biden administration pledged to help as many as 200 Americans who remained escape from what they fear would be a brutal life under Taliban rule.

“The bottom line: Ninety percent of Americans in Afghanistan who wanted to leave were able to leave,” President Biden said on Tuesday. He said the U.S. government alerted Americans 19 times since March to leave Afghanistan.

“And for those remaining Americans, there is no deadline,” he said. “We remain committed to get them out if they want to come out.”

About 6,000 Americans, the vast majority of them dual U.S.-Afghan citizens, were evacuated after Aug. 14, Secretary of State Antony J. Blinken said Monday. The State Department has not provided numbers for how many permanent legal U.S. residents have also been evacuated or — as in Mr. Naderi’s case — failed to get on a flight out. Immigration and refugee advocacy groups estimated that thousands remained.

Mr. Blinken described “extraordinary efforts to give Americans every opportunity to depart the country,” as diplomats made 55,000 calls and sent 33,000 emails to U.S. citizens in Afghanistan, and in some cases, walked them into the Kabul airport.

“We have no illusion that any of this will be easy or rapid,” Mr. Blinken said at the State Department’s headquarters in Washington. “This will be an entirely different phase from the evacuation that just concluded. It will take time to work through a new set of challenges.”

Several members of Congress had demanded that the U.S. military stay in Afghanistan until American citizens, permanent residents and an estimated tens of thousands of Afghans eligible for special immigrant visas could be evacuated. But by this weekend, the lawmakers sounded resigned in acknowledging that many would be left behind.

“Our team will continue to work to safely evacuate American citizens and Afghan allies and to reunite families and loved ones,” Senator Jeff Merkley, Democrat of Oregon, said on Twitter late Sunday night. “I urge the State Department and the rest of our government to continue to use every tool possible to get folks to safety, deadline or not.”

Senator Ben Sasse, Republican of Nebraska, excoriated Mr. Biden’s remarks on Tuesday as a show of “callous indifference to the Americans he abandoned behind enemy lines.”

“He promised the American people that our troops would stay until every American was out,” Mr. Sasse, a member of the Senate Intelligence Committee, said in a statement.

The chaotic effort to locate, contact and then speed American citizens in Afghanistan to safety was mired, officials and advocacy groups said, by a lack of coordination across the U.S. government, frustrated attempts at outreach by the State Department, and increasingly frequent warnings of possible attacks that forced airport gates to close and meeting points to be moved.

Relief groups in the United States that helped American citizens and Afghans who worked with the U.S. government described a heartbreaking and dizzying process in which people trying to escape were routed, then rerouted, to pickup points across Kabul where they were to board buses or join caravans headed to the airport, but were blocked along the way.

Some people reported that Taliban fighters at checkpoints took their American passports, the relief workers said. Others said they were harassed or beaten as they made their way to meeting points, and were unwilling to again put themselves and their families in harm’s way. And some said they were turned back by American troops standing guard at the airport gate.

“Why can’t we get people out?” said Freshta Taeb, the American-born daughter of an Afghan refugee, who provides emotional counseling and translation services for Afghan immigrants in the United States, including those who worked with the U.S. military.

Ms. Taeb blamed the Biden administration for a military withdrawal that she said “was done haphazardly, was done sloppily.”

“There was time to create a plan and do what needed to be done to get these people out,” she said. “But it doesn’t seem like there was a strategy behind this.”

Understand the Taliban Takeover in Afghanistan

Who are the Taliban? The Taliban arose in 1994 amid the turmoil that came after the withdrawal of Soviet forces from Afghanistan in 1989. They used brutal public punishments, including floggings, amputations and mass executions, to enforce their rules. Here’s more on their origin story and their record as rulers.

Who are the Taliban leaders? These are the top leaders of the Taliban, men who have spent years on the run, in hiding, in jail and dodging American drones. Little is known about them or how they plan to govern, including whether they will be as tolerant as they claim to be. One spokesman told The Times that the group wanted to forget its past, but that there would be some restrictions.

How did the Taliban gain control? See how the Taliban retook power in Afghanistan in a few months, and read about how their strategy enabled them to do so.

What happens to the women of Afghanistan? The last time the Taliban were in power, they barred women and girls from taking most jobs or going to school. Afghan women have made many gains since the Taliban were toppled, but now they fear that ground may be lost. Taliban officials are trying to reassure women that things will be different, but there are signs that, at least in some areas, they have begun to reimpose the old order.

What does their victory mean for terrorist groups? The United States invaded Afghanistan 20 years ago in response to terrorism, and many worry that Al Qaeda and other radical groups will again find safe haven there. On Aug. 26, deadly explosions outside Afghanistan’s main airport claimed by the Islamic State demonstrated that terrorists remain a threat.

How will this affect future U.S. policy in the region? Washington and the Taliban may spend years pulled between cooperation and conflict, Some of the key issues at hand include: how to cooperate against a mutual enemy, the Islamic State branch in the region, known as ISIS-K, and whether the U.S. should release $9.4 billion in Afghan government currency reserves that are frozen in the country.

Ross Wilson, who was the top U.S. diplomat in Afghanistan and was on the last military flight to depart, said Monday on Twitter that “claims that American citizens have been turned away or denied access” to the airport in Kabul “by Embassy staff or US Forces are false.”

In Washington, officials have struggled to keep up.

Military officials had privately accused the State Department of moving too slowly to process a crush of people begging to be evacuated. State Department officials, already facing a backlog of visa applications from Afghans that began during the Trump administration, focused first on finding Americans and verifying their citizenship.

Officials said a small but unspecified number of U.S. citizens had signaled that they did not want to escape Afghanistan, unwilling to give up their homes, jobs or schooling, or refusing to leave behind relatives, including elderly parents who were not Americans and otherwise had no way out.

Foreign-born spouses of American citizens, and their unmarried children who are under 21, are eligible to immigrate to the United States after receiving certain approvals, a process that was expedited for some Afghans during the evacuation. Extended family members, like parents, siblings and other relatives, must go through an immigration process that Jenna Gilbert, the director of refugee representation at Human Rights First, said could take “an extraordinarily long” time.

But there are no plans to change visa requirements for extended family members who would have to “travel to the United States under other forms of eligibility,” Ned Price, the department’s spokesman, said Friday.

The Kabul airport is not expected to be fully functioning for some time without the American military, although the Biden administration is leaning on allies, including Turkey and Qatar, to take over some of the operations to facilitate small charter flights for people who want to leave, Mr. Blinken said. The State Department is also weighing how to protect American citizens and Afghans at high risk of Taliban reprisals who drive to one of several neighboring nations, and seek safe passage to the United States from there.

Mr. Naderi said on Tuesday he was not sure of what to do, but was looking at leaving Afghanistan over its border with either Pakistan or Tajikistan. As proof of his American residency, he provided an image of his green card, which he received last year, and said he had been living with his father in Philadelphia with hopes of moving his wife and son to the United States. (The State Department would not comment on his case, citing privacy concerns.)

He returned to Afghanistan on Aug. 10 to gather immigration documents for his wife and son, said his father, Esmail Naderi, who had worked for several American military contracting firms in construction and other fields from 2004 to 2015.

Five days later, the Taliban seized power and the U.S. Embassy in Kabul closed as diplomats were evacuated to the airport.

Getting the proper visas for the family in time was not possible. “My situation is really bad right now,” Samiullah Naderi said Tuesday.

01/09/2021 Politics Comments Off on Stranded in Kabul: A U.S. Resident Runs Out of Options
Markets