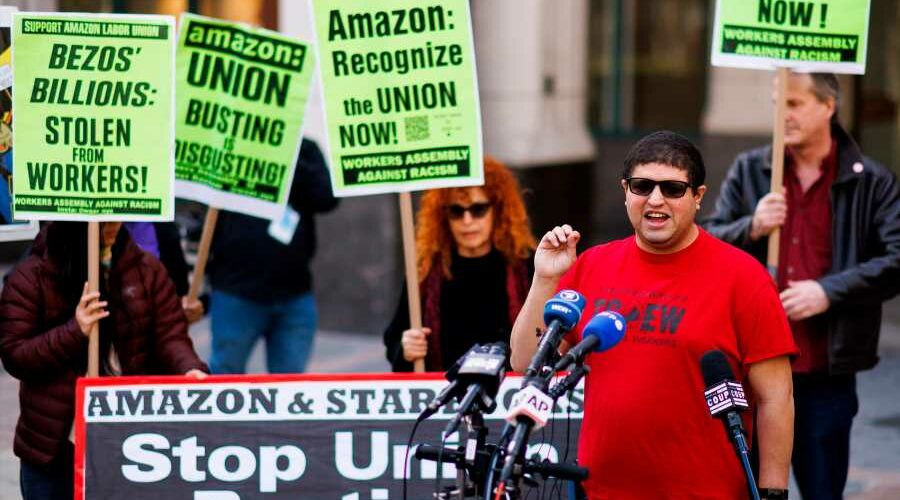 Workers in Staten Island, New York, have voted to form the first union inside an Amazon warehouse in the United States. The election, conducted by the National Labor Relations Board, saw a vote count of 2,654 in favor and 2,131 against. If the board certifies the results, employees at the JFK8 fulfillment center will join a new independent labor group called the Amazon Labor Union (ALU) — and Amazon will have to bargain with it.

Amazon spent $4.3 million over the past year trying to snuff out pro-labor sentiment, according to HuffPost, citing U.S. Labor Department documents the company filed on Thursday. High on its radar was Chris Smalls, a former Amazon worker at JFK8 who organized a strike over lack of protective measures for workers in the early days of the coronavirus pandemic. The company fired Smalls, claiming he flouted social distancing guidelines. He, along with JFK8 employee Derrick Palmer, launched a unionization campaign that many commentators believed would have a slim chance of success. Besides Amazon’s ample war chest to fight such efforts, another reason, Smalls explained, was the high turnover rate at the company. But along the way, the union drive seemed to gain traction after Amazon executives discussed smearing Smalls as “not smart or articulate,” and after Smalls and two others were arrested while attempting to deliver food to Amazon workers.

ALU is seeking a $30 hourly wage, a shuttle service for workers who live in the city’s five boroughs, and, in general, “better benefits, more time off, and safety protections,” according to its website.

“We demand to be treated as human beings and not mere replaceable appendages to the robots and algorithms that run the warehouses,” an ALU statement reads.

In a statement following the vote, Amazon said it’s “disappointed” in the outcome “because we believe having a direct relationship with the company is best for our employees.” The spokesperson added: “We’re evaluating our options, including filing objections based on the inappropriate and undue influence by the NLRB that we and others (including the National Retail Federation and U.S. Chamber of Commerce) witnessed in this election.”

The news out of Staten Island comes as the results of a unionization vote for an Amazon warehouse in Bessemer, Alabama, are still being counted. CNN reported Thursday night that 875 voted in favor with 993 opposed, yet 416 ballots have been challenged (potentially over employee eligibility or problems with the ballot itself) and remain unopened. A vote last year at the Bessemer warehouse failed, but a NLRB regional director had the results tossed after determining that Amazon had “made a free and fair election impossible.”