Some of the 175 Republicans who voted against establishing an independent commission to investigate the Capitol riot supported a commission in January.

In the days after the Jan. 6 attack, 30 Republicans co-sponsored a commission bill introduced by Rep. Rodney Davis (R-Ill.). On Wednesday, even more Republicans endorsed the idea ― Davis was one of the 35 Republicans who broke with party leaders and voted in favor of a commission on Wednesday.

After all, it is common for Congress to establish an advisory commission in the wake of a disaster or to help with some complicated policy problem. Congress has established dozens and dozens of commissions in recent decades.

But 16 of the Republicans who co-sponsored the Davis bill in January voted against the newer bill to establish a commission, which was written by House Homeland Security Chair Bennie Thompson (D-Miss.) and the committee’s top Republican, Rep. John Katko (R-N.Y.).

One of them, Rep. Jim Banks (R-Ind.), had such a strong change of heart that he urged his colleagues to vote against the commission bill Wednesday during a Republican Study Committee meeting before the vote. Banks refused to speak to HuffPost about the commission.

The Davis bill from January envisioned a similar commission to the one in the Thompson-Katko bill, with five expert members appointed by each party, the same power to issue subpoenas, and a final report with “recommendations for corrective measures.” Both bills are modeled on the legislation that established the Sept. 11, 2001, terrorist attacks commission. 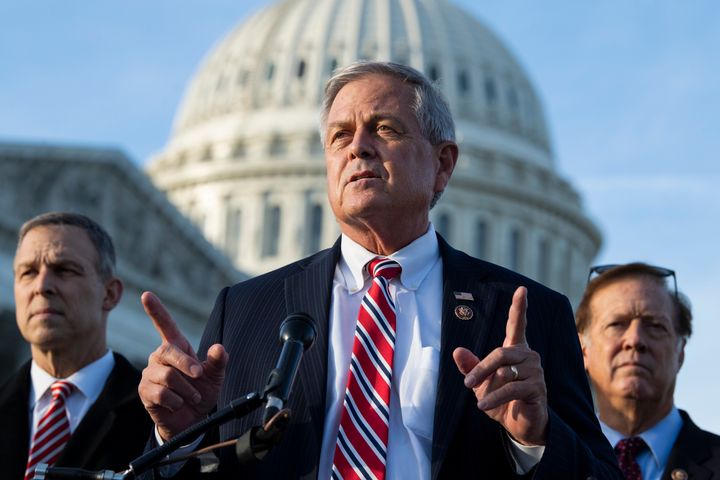 Rep. Ralph Norman (R-S.C.), who co-sponsored the Davis bill but voted against the Thompson-Katko bill, insisted the two measures are very different.

“It’s a whole different situation,” Norman told HuffPost. “Their intent is just to keep the spotlight on Trump, and that’s not right.”

There are some small differences between the bills. The one Noman supported would give the commission 18 months to write its report, while the one that passed the House sets a Dec. 31, 2021, deadline. But the shorter deadline is probably advantageous for Republicans, since it means a big commission report wouldn’t drop right before the midterm elections next year.

The House-passed bill disallows current officeholders from serving on the panel, but, in a break from the 9/11 commission model, the Republican bill would allow the appointment of two members of Congress, giving Republicans an opportunity for sabotage.

Before Thompson and Katko announced their agreement last week, House Speaker Nancy Pelosi (D-Calif.) had her own proposal for a commission, one with more Democratic than Republican appointees and unilateral subpoena powers.

But even after she conceded to an even party split, Republican leaders complained that the commission wouldn’t also look at Black Lives Matter protests that had no relevance to the Capitol attack.

And this week Senate Majority Leader Mitch McConnell (R-Ky.) griped that a commission would duplicate ongoing congressional and criminal investigations, even though the same was true of the 9/11 commission. The House bill faces uncertain odds in the Senate.

Norman’s complaint that a commission would “keep the spotlight on Trump” points to the real reason most Republicans oppose a special investigation. The events of Jan. 6 reflect poorly on the Republican Party because its leader, Donald Trump, incited the attack on the Capitol with his lies about the election, and most Republicans joined him in telling those lies.