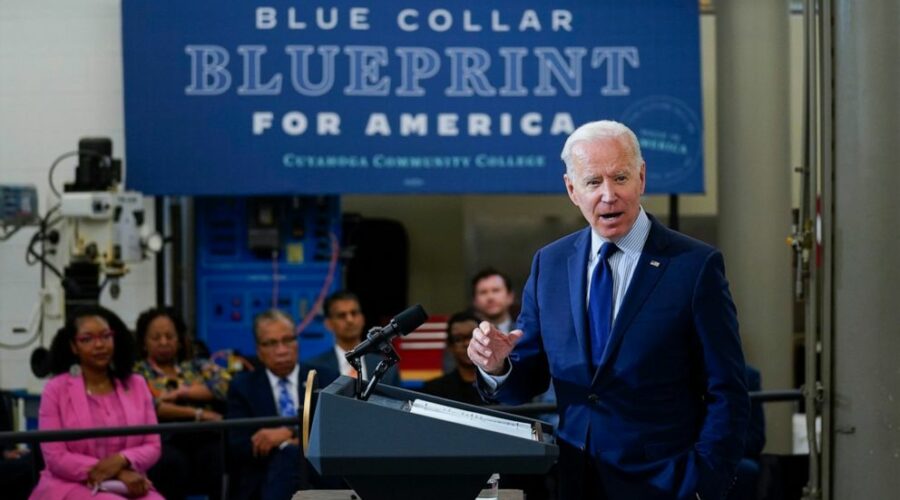 WASHINGTON — President Joe Biden’s $6 trillion budget proposal for next year would run a $1.8 trillion federal government deficit despite a raft of new tax increases on corporations and high-income people designed to pay for his ambitious spending plans.

Biden had already announced his major budget initiatives, but during a rollout Friday he will release them as a single proposal to incorporate them into the government’s existing budget framework, including Social Security and Medicare. That provides a fuller view of the administration’s fiscal posture.

Democratic aides disclosed key elements of the Biden plan, speaking on condition of anonymity because the document is not yet public.

The whopping deficit projections reflect a government whose steadily accumulating pile of debt has topped $28 trillion after well more than $5 trillion in COVID-19 relief. The government’s structural deficit remains unchecked, and Biden uses tax hikes on businesses and the wealthy to power huge new social programs like universal prekindergarten and large subsidies for child care.

The budget incorporates the administration’s eight-year, $2.3 trillion infrastructure proposal and its $1.8 trillion American Families Plan and adds details on his $1.5 trillion request for annual operating appropriations for the Pentagon and domestic agencies.

It is sure to give Republicans fresh ammunition for their criticisms of the new Democratic administration as bent on a “tax and spend” agenda with resulting deficits that would damage the economy and impose a crushing debt burden on younger Americans. Huge deficits have yet to drive up interest rates as many fiscal hawks have feared, however, and anti-deficit sentiment among Democrats has mostly vanished.

“Now is the time to build (upon) the foundation that we’ve laid to make bold investments in our families and our communities and our nation,” Biden said Thursday in an appearance in Cleveland to tout his economic plans. “We know from history that these kinds of investments raise both the floor and the ceiling over the economy for everybody.”

The unusual timing of the budget rollout — the Friday afternoon before Memorial Day weekend — indicates that the White House isn’t eager to trumpet the bad deficit news. Typically, lawmakers host an immediate round of hearings on the budget, but those will have to wait until Congress returns from a weeklong recess.

Under Biden’s plan, the debt held by the public would exceed the size of the economy and soon eclipse record levels of debt relative to gross domestic product that have stood since World War II. That’s despite more than $3 trillion in proposed tax increases over the decade, including an increase in the corporate tax rate from 21% to 28%, increased capital gains rates on top earners, and returning the top personal income tax bracket to 39.6%.

Like all presidential budgets, Biden’s plan is simply a proposal. It’s up to Congress to implement it through tax and spending legislation and annual agency budget bills. With Democrats in control of Capitol Hill, albeit barely, the president has the ability to implement many of his tax and spending plans, though his hopes for awarding greater budget increases to domestic agencies than promised for the Pentagon are sure to hit a roadblock with Republicans. Some Democrats, however, are already balking at Biden’s full menu of tax increases.

The Biden plan comes as the White House is seeking an agreement with Senate Republicans over infrastructure spending. There are growing expectations that he may have to go it alone and pass his plans by relying on support from his narrow Democratic majorities in both the House and Senate.

The flood of new spending includes $200 billion over 10 years to provide free preschool to all 3- and 4-year-olds and $109 billion to offer two years of free community college to all Americans. Also, $225 billion would subsidize child care to allow many to pay a maximum of 7% of their income for all children under age 5. And another $225 billion over the next decade would create a national family and medical leave program, while $200 billion would make recently enacted subsidy increases under the Obama health care law permanent.

It also calls for a major boost to Title I, a federal funding program for schools with large concentrations of low-income students. The proposal would provide $36.5 billion for the program, an increase of $20 billion over current levels. The new funding would be used to increase teacher pay, expand access to preschool, decrease inequities in education and increase access to rigorous coursework, according to a congressional aide briefed on the budget who spoke on condition of anonymity ahead of the official release.

Such increases would drive federal spending to about 25% of the GDP, while the tax increases would mean revenues approaching 20% of the size of the economy once implemented.

Speaking from Air Force One, White House press secretary Jen Psaki noted that Biden inherited deficits already swelled by COVID-19 relief and promised that the administration’s initiatives “will put us on better financial footing over time.”

And the Biden team says public sentiment is on its side, citing recent opinion polls that show the public largely approves of ideas like boosting spending for roads and bridges and better broadband, as well as its plans to raise taxes on corporations and upper bracket earners.

“The President’s Jobs Plan and Families Plan represent once-in-a-generation investments in our economy, and they put forward a blue collar blueprint to ensure that prosperity is shared by all Americans,” longtime Biden adviser Mike Donilon said in a statement.

“So far this administration has recommended we spend 7 trillion additional dollars this year. That would be more than we spent in adjusted inflation dollars to win World War II,” Senate Republican leader Mitch McConnell said Thursday on CNBC. “So they have huge spending desire and … a great desire to add in $3.6 trillion in additional taxes on top of it.”

Biden’s budget assumes the economy will grow by 5.2% this year and 4.3% next year before settling to about 2% growth thereafter.