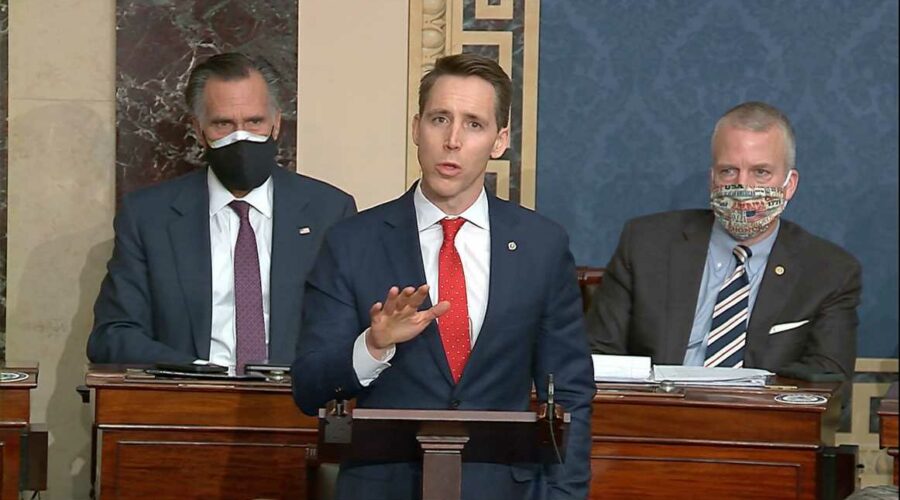 Simon & Schuster said Thursday it would cancel the publication of Sen. Josh Hawley’s book about big tech, citing what it referred to as his role in Wednesday’s violent mob attack on the U.S. Capitol.

The Missouri Republican is one of several congressional allies of President Donald Trump facing fierce criticism over accusations of encouraging the insurrectionists who stormed the halls of Congress on Wednesday. The senator was the first to say he would contest the certification of the Electoral College votes for Democrat Joe Biden, and he did so even after the riot began.

The publisher was set to release Hawley’s book, “The Tyranny of Big Tech,” in June. The book “argues that big tech companies — Facebook, Google, Amazon, and Apple — represent the gravest threat to American liberty since the monopolies of the Gilded Age.”

“We did not come to this decision lightly,” Simon & Schuster said in a statement. “As a publisher it will always be our mission to amplify a variety of voices and viewpoints; at the same time we take seriously our larger public responsibility as citizens, and cannot support Senator Hawley after his role in what became a dangerous threat to our democracy and freedom.”

“This could not be more Orwellian,” Hawley said in a statement posted to Twitter, adding that he was “representing my constituents, leading a debate on the Senate floor on voter integrity, which they have now decided to redefine as sedition.”

“It’s a direct assault on the First Amendment,” he added. “Only approved speech can now be published. This is the Left looking to cancel everyone they don’t approve of.”

He vowed to take his grievances to court.

The senator was lambasted for his decision to stymie Congress’s certification of the Electoral College vote on Wednesday, forcing a lengthy floor debate in both chambers as Trump allies continued to push lies about voter fraud in an effort to undermine President-elect Biden’s win. Hawley also directed a closed-fist gesture of support to those gathered outside the Capitol before the rioting began.

In a statement after the incursion, Hawley thanked law enforcement officials and said the “violence must end.”

“Those who attacked police and broke the law must be prosecuted, and Congress must get back to work and finish its job,” he said.

The New York Times notes that Simon & Schuster has been subject to pressure campaigns in the past over its decision to publish books by controversial conservative figures. In 2017, it called off the release of a book by Milo Yiannopoulos, the far-right commentator.