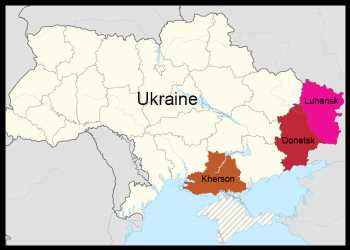 A top American diplomat says the United States has highly credible intelligence reports that Russia will try to annex the separatist eastern Ukrainian regions of Donetsk and Luhansk later this month.

Speaking at a State Department news conference Monday, the US Ambassador to the Organization for Security and Cooperation in Europe said as the Kremlin “engineered’ the creation of the so-called “people’s republics” in Donetsk and Luhansk, it may also be trying to organize a “people’s republic” in the Kherson oblast of southern Ukraine.

Ambassador Michael Carpenter said that according to the most recent reports, Washington believes Russia is also planning to conduct referendum in Donetsk, Luhansk and Kherson on joining Russia sometime in mid-May.

“The OSCE has been very clear that such referenda, such sham referenda, fabricated votes, will not be considered legitimate, nor will any attempts to annex additional Ukrainian territory,” Carpenter told reporters. He stressed the need to act with a sense of urgency.

According to him, what the Kremlin playbook calls for is delegitimizing the democratically elected leaders and imposing fake people’s councils essentially made up of the Kremlin’s puppets and proxies. “Again, this is something that we’ve seen in the past, and we’re looking very closely to see whether the Kremlin might try to orchestrate something like this in the near future,” he added.

Carpenter said that although Ukraine won the battle of Kyiv, Russia’s playbook is being tailored for what it plans to do in the south and east of Ukraine.

He said there are reports of abductions of mayors and other local officials as well as enforced disappearances of school directors, journalists, local activists, and municipal officials in these regions.

Russia is reportedly replacing them with “groups that are loyal to Moscow.”

There have been reports of plans to impose a Russian school curriculum in the south and east.

Carpenter brought to notice reports that Russia plans to force the local population to use the ruble. “More recently, there have been reports as well that Russian forces have cut off internet and some cellular phone access in these regions in order to disable the flow of reliable information,” he added.

03/05/2022 Politics Comments Off on Russia Will Try To Annex Donetsk And Luhansk By Mid-May: US Ambassador
Markets