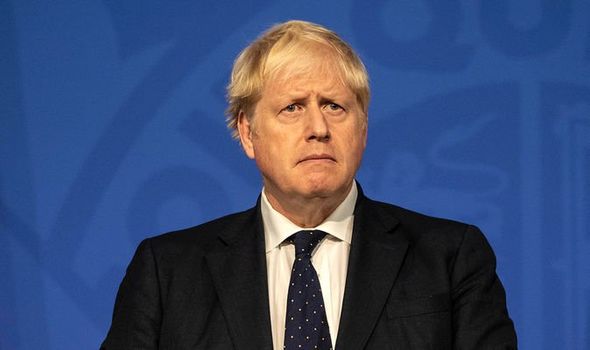 The Prime Minister wants wealthy nations to hit a $100 billion (£70 billion) target by the COP26 Climate Summit in November. Britain is leading the way having already pumped £11.billion into tackling climate change.

The PM will also press Joe Biden on the matter during a visit to the White House this week when he will also push the US President on the looming humanitarian crisis in Afghanistan and the potential of reopening UK to US travel.

With some 100 world leaders expected in New York at the UN General Assembly during the next few days, Mr Johnson will seek to galvanise action during a series of high-level meetings.

Wealthy nations had pledged to mobilise $100 billion (£70 billion) a year from 2020 to support developing countries cut their carbon emissions and tackle climate change.

The UK has already committed £11.6 billion in international climate finance over the next five years, twice the previous five-year commitment.

And today the Prime Minister announced that £550 million of this will be allocated to support developing countries to meet net-zero.

Mr Johnson said: “In coming together to agree the $100bn pledge, the world’s richest countries made a historic commitment to the world’s poorest – we now owe it to them to deliver on that.

“Richer nations have reaped the benefits of untrammelled pollution for generations, often at the expense of developing countries. As those countries now try to grow their economies in a clean, green and sustainable way we have a duty to support them in doing so – with our technology, with our expertise and with the money we have promised.”

The Prime Minister will seek to use his meeting with Joe Biden in Washington to build bridges after the chaotic withdrawal of troops from Afghanistan.

He will also try to make headway with the US President over the Northern Ireland border as he seeks to strike a post-Brexit trade deal.

It is his first visit to the White House since Mr Biden succeeded Donald Trump as US president.

Many had hoped the Democrat’s arrival would restore the “special relationship” between the UK and US to full health, but the crisis in Afghanistan has put it under strain.

Mr Biden rejected calls from the Prime Minister and other allies to delay his withdrawal of troops to buy more time to evacuate former Afghan staff, their families and other vulnerable citizens.

With refusal meaning possibly thousands were left behind, Mr Johnson is expected to discuss further efforts to stem a humanitarian crisis in Afghanistan.

The Prime Minister is also likely to push for a restoration of UK-US travel, with Mr Biden’s administration having imposed a ban due to soaring rates of the Delta variant of coronavirus.

Fallout from the new Aukus military pact between the UK, US and Australia is also expected to be under discussion.

Not only has it angered China, but France has recalled ambassadors to the US and Australia because the agreement to provide nuclear submarines to Canberra meant the cancellation of a £30 billion deal for the French.

Mr Johnson will also meet vice-president Kamala Harris and other senior figures in American politics, as he eyes a post-Brexit trade deal with the US.