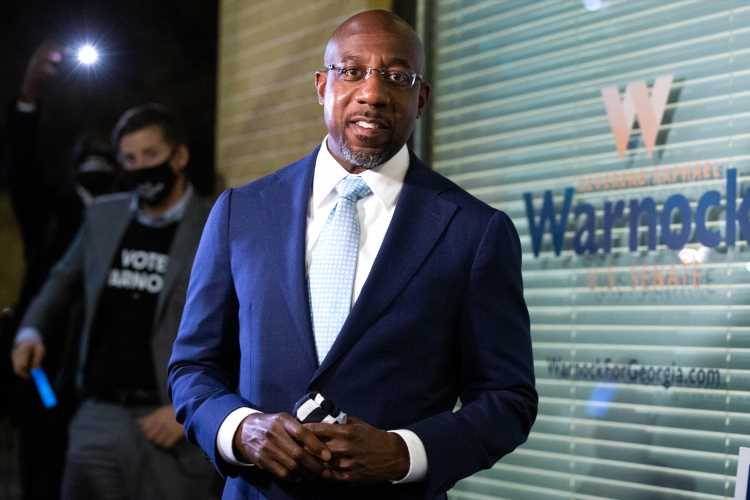 The Rev. Raphael Warnock has defeated Republican Sen. Kelly Loeffler in one of Georgia's close Senate runoff elections that took place on Tuesday — giving the Democratic Party one more seat in Congress.

Early Wednesday morning, Warnock was projected the winner of his runoff race, according to multiple outlets, making history as the first Black senator elected from Georgia.

Runningmate Loeffler has not conceded, addressing supporters in a speech overnight, "We have a path to victory, and we're staying on it."

Warnock also addressed his supporters in a speech shared on social media, thanking the state of Georgia and voters for his win.

"Tonight, we proved that with hope, hard work, and the people by our side, anything is possible," Warnock said.

But the last runoff election is still underway, with control of the U.S. Senate coming down to either Republican David Perdue or Democrat Jon Ossoff, who currently leads the race by a thin margin with 97 percent of the vote already tabulated.

Because no Georgia candidates received a majority of either vote in November, both runoffs were set for Tuesday.

The stakes “could not be higher,” both parties' biggest advocates — including Trump and former President Barack Obama — declared ahead of the race’s conclusion. The president has provided no evidence to support those claims, while Georgia’s governor and secretary of state — both Republicans — have publicly disputed Trump’s efforts to undermine the country’s democratic process in order to stay in power.

State and federal courts — including the Supreme Court, which has three Trump-appointed Justices — have outright rejected or dismissed dozens of his campaign’s lawsuits surrounding his conspiracy theories. Trump’s gripes over his own loss became a focal point in the runoffs, as both Loeffler, 50, and Perdue, 71, pledged loyalty to the president and said they’d object to ratifying Biden’s win once Congress gathers to do so on Wednesday.

"You have two senators who think they've sworn an oath to Donald Trump, not to the United States Constitution," Biden declared Monday during a campaign rally, hours before Trump also visited the state.

The two-month runoff campaign also grew intensely personal for the candidates themselves.

Loeffler, a wealthy financial executive and co-owner of the WNBA’s Atlanta Dream, has faced scrutiny over her past remarks against the Black Lives Matter movement. While Loeffler also faced criticism for a photo she took with a white supremacist, she accused Warnock of being “the most radical Democrat on the ballot this year,” the The Washington Post reported.

She and Warnock, a Georgia pastor who rose to prominence as a religious leader at Dr. Martin Luther King’s former church, have also sparred on social media.

In the other race, Perdue’s campaign labeled Ossoff, the Democratic challenger vying to become the youngest member of the Senate body, as "unserious and unprepared." Though, when Perdue didn’t show up for a televised debate last month, Ossoff pointed to the empty lectern and accused the Republican incumbent of being "so arrogant, that he's not with us here today to answer questions."

Voters showed up in record numbers, however, casting millions of ballots in the all-important race to determine the Senate’s political majority.

“Georgia, the whole nation is looking to you,” Biden said Monday, adding, "Unlike any time in my career, one state — one state — can chart the course, not just for the four years, but for the next generation."