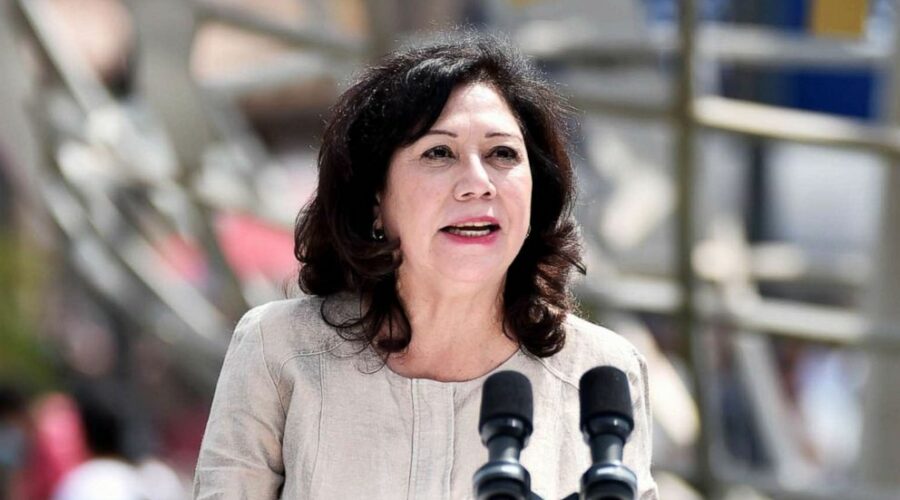 Los Angeles County Board of Supervisors Chair Hilda L. Solis said Sunday that restoring the mask mandate there is “not punishment, but prevention” as the county responds to the alarming spike in cases of the highly transmissible delta variant.

“We’re up to almost 1,900 cases and over 460 individuals that are now in our ICU unit. This is very disturbing,” Solis told ABC “This Week” co-anchor Martha Raddatz. “As responsible elected officials, we have to do something, and in this case, the county has the ability to do that through our health order, through our health officer.”

The county announced Thursday that it would reinstate the mask mandate at 11:59 p.m. Saturday, nearly a month after California Gov. Gavin Newsom waived many of the state’s COVID-19 restrictions.

Though roughly 52% of LA County residents have been vaccinated, the mask mandate applies to all county residents regardless of vaccination status, as the county endeavors to avoid overwhelming local hospitals and protect vulnerable groups.

“We’re seeing that this transmission is so highly contagious that it will cost more in the long run if we have to see our hospitals being impacted, our ICU units, as well as our health care workers,” Solis said.

“I just want to caution people that we still have many youngsters under the age of 12, who are not eligible to get vaccinated. So we, as responsible adults, should be taking a proactive approach and making sure that we mask up and that we also get vaccinated as soon as possible,” she added.

Solis explained that the county was also promoting programs aimed at “lessening the hardships” to receive a vaccine and to ease vaccine hesitancy.

“We are going with groups on the ground to parks, to swimming pools, to swap meets — anywhere you can think of where we are encouraging people to get vaccinated,” Solis said.

Raddatz asked Solis if she believed imposing the mask mandate on both the vaccinated and unvaccinated populations would disincentivize vaccines.

“A recent survey from the Kaiser Family Foundation found that once vaccine-hesitant people saw that vaccinated people could go out in the community, it was an incentive, and those easing of restrictions helped the hesitant people go out and get the shot. Are you worried that they won’t do that now?” Raddatz asked.

“No, in fact, just yesterday we held an event out in a park and we saw many adults coming in with their children. And I think, because of the heightened information regarding the delta variant, that more people are more concerned,” Solis replied.

Solis also said that she believes more California counties will introduce similar mask mandates in the near future.

“I think that other counties and other jurisdictions are going to also follow suit in the coming days and let these numbers go in the different direction, but right now they continue to rise,” she said.

Raddatz asked how the county intends to enforce the mask mandate, citing a recent statement from the Los Angeles County Sheriff’s Office that said the department would not force residents to comply with the mandate.

“Our public health department is typically the individuals that go out and do inspections, so I don’t see where the sheriff really has to come in and weigh in on the manner that he might have thought,” Solis said.

“I’m not concerned about that. I think the public, overall, is smart enough to understand what is being said and how to protect themselves,” she added.

18/07/2021 Politics Comments Off on Reinstating mask mandate in LA 'not punishment, but prevention': Solis
Markets