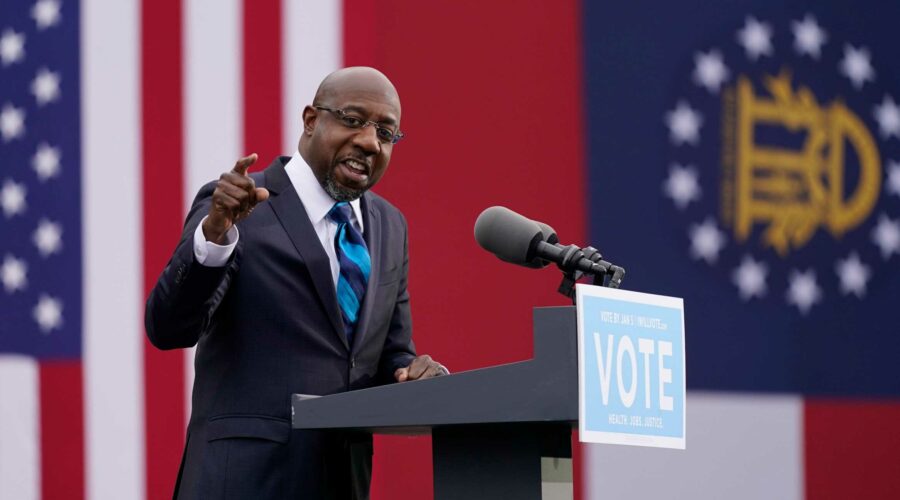 Control of the Senate rests on the two runoffs in Georgia. In the other, Democrat Jon Ossoff is challenging Sen. David Perdue (R). If Democrats win both, they control the chamber. (It would be split 50-50, with Vice President-elect Kamala Harris as the tiebreaker.) If Republicans hold on to just one seat, Mitch McConnell (R-Ky.) remains the majority leader.

Warnock’s win is historic. There have been only 10 Black senators in history, and Warnock is the first Democrat from the South since Reconstruction. (The other Black senator from the region is Sen. Tim Scott from South Carolina, who is a Republican.)

Warnock, a graduate of Morehouse College, became senior pastor of Ebenezer Baptist Church ― the famous Atlanta church where Martin Luther King Jr. preached ― in 2005 when he was 35. In 2013, he delivered the closing prayer at Barack Obama’s Inaugural Prayer Service, and in 2016, he gave the sermon at the annual White House Easter Prayer Breakfast.

During his campaign, Warnock emphasized his life rising out of poverty as a contrast to Loeffler. In one ad, he walked through the housing project in Savannah where he grew up with 11 brothers and sisters, stating that children there “have it harder now than I did back then. That’s got to change.”

Loeffler, a former Wall Street executive, is the richest member of Congress, and her husband is the chairman of the New York Stock Exchange. In April, she came under significant criticism for trading millions of dollars in stocks after receiving a closed-door Senate briefing on the coronavirus in January ― before many Americans understood the severity of the virus.

While Loeffler said at the time that she did nothing wrong with the trades, she announced that she and her husband would liquidate their individual stock shares to move on from the “distraction.”

In the runoffs, Perdue and Loeffler tied themselves closely to President Donald Trump, putting them at odds with the Republican political establishment in their own state. They backed Trump’s efforts to discredit and overturn the presidential election results in Georgia, even as the state’s top GOP officials ― including the governor and the secretary of state ― stood by the results.

The strategy was risky, considering that Trump lost the state. But they gambled that they needed to energize and turn out Trump’s base in order to win ― even at the risk of energizing Democrats even more or alienating more moderate Republicans and independents.

Perdue and Loeffler also struggled to keep up with Trump’s position on the coronavirus stimulus legislation, first wholeheartedly supporting it ― with the $600 checks ― and then changing their minds and supporting $2,000 checks once Trump said he wanted a higher amount.

Warnock, not Ossoff, was the focus of Republicans’ attacks across the two Senate races, which demonized the prominent Black leader in an appeal to white conservatives. They tried to portray him as an unpatriotic radical and even a “heretic.”

Loeffler was also seen as more vulnerable than Perdue, having survived a bruising November election in which she battled Rep. Doug Collins (R-Ga.). The race was an open election, meaning candidates of all parties ran together. While Loeffler and Collins battled for largely the same voters, Warnock emerged relatively unscathed and consolidated the Democratic vote.

Ossoff and Warnock shattered fundraising records ― pulling in more than $100 million each in the past two months ― and significantly outraised their GOP opponents. Yet eight days before the election, the campaign managers for the Ossoff and Warnock campaigns wrote a joint memo “sounding the alarm” about the need for more funds. While Democrats were largely relying on individual donations and small-dollar contributions, they were being outspent by GOP outside groups.

Republicans have traditionally held turnout advantages in runoffs, but Trump’s allies actually encouraged GOP voters to stay home and not vote as part of their strategy of questioning the integrity of the election process.

More than 2 million people had already voted early a week out from the runoff, pointing to the intense interest and attention on the race. By contrast, in the last Senate runoff in Georgia, which was after the 2008 election, just 2.1 million voters turned out in total.

Read live updates on election news below. (Note: An ad blocker may prevent you from seeing the blog, so if you’re using one, please pause or turn it off.)