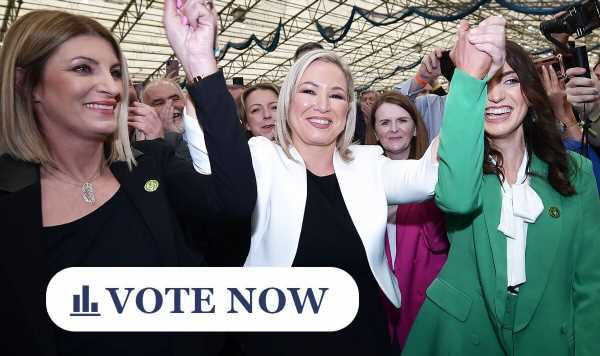 Michelle O’Neill is set to become First Minister of Northern Ireland following Sinn Fein winning 27 of the 90 seats available. Slumping into second position for the first time, the DUP have stated they will not enter into a shared power agreement with Sinn Fein until the UK Government resolve the Northern Ireland Protocol situation with the European Union.

On Friday, May 6, Mary Lou McDonald said the party would work towards holding a border poll within the next five years.

The notion of a border poll will ask whether Northern Ireland should remain part of the United Kingdom, or join the Republic making a 32-county united island of Ireland.

The move will essentially spell the break-up of the UK, and will likely catalyse a similar move in Scotland as the SNP push for a second referendum on independence under Nicola Sturgeon.

The last poll was held in March 1973, marking the first time a major referendum was held in any region on membership of the UK.

People strongly voted in favour of remaining as part of the UK, with 99 per cent of the vote. Just one per cent voted for Irish reunification.

However, the poll was boycotted by most of the nationalist community, with a turnout at 59 percent.

With the nationalist community now the dominant political force in the North, the question as to whether a united Ireland is now inevitable remains top of the political agenda.

The Good Friday Agreement 1998 states Northern Ireland will remain part of the UK and “shall not cease to be so without the consent of a majority of the people of Northern Ireland voting in a poll”.

It also states the UK Government’s Northern Ireland Secretary would agree to hold a poll if it appeared likely a majority of people wanted a united Ireland.
But current opinion polls do not suggest there is overwhelming support for a split.

Last month, an opinion poll suggested those in support of such a move amounted to one-third of the people asked.

The Institute of Irish Studies-University of Liverpool/Irish News survey found 30 percent would back the reunification of Ireland in a referendum, with 45.3 percent voting against it.

However, around 25 percent of people have yet to make their minds up, and as seen with the Brexit referendum, as well as the election of US President Donald Trump, a surprise result could well be on the cards.

On Friday, Ms McDonald suggested the planning for a referendum needs to start immediately.

She said: “I believe the referendum would be possible within a five-year timeframe, but much more importantly, I believe the preparation needs to start now.”

Will the poll jolt Scotland into doing the same? Is this the end of the United Kindgom? Is Boris Johnson to blame for his handling of Brexit? Let us know what you think by CLICKING HERE and joining the debate in our comments section below – Every Voice Matters

Oliver Dowden, Tory party chairman, has said the UK Government will honour the constitutional obligation to hold a border poll on the future of Northern Ireland if “there is a sustained majority” in favour of unification.

Speaking to Sky News, he said: “If there is a sustained majority nationalist opinion in favour of a united Ireland that would have to be put forward in a referendum.

“That is kind of beyond the power of the United Kingdom government and we have to allow that to happen were that the case.”

Mr Dowden ended: “Boris Johnson is, as I am and the entire Cabinet… we’re passionate unionists and we believe in the value of Northern Ireland as part of our United Kingdom.

“Of course, we will honour the provisions of the Good Friday Agreement if that were required but I am confident we will be able to make the case for Northern Ireland remaining in the United Kingdom should that arise, but I don’t think we are at that stage yet.”

Unionist factions in Northern Ireland have vowed to use “guerrilla warfare” and any means necessary to end the Brexit deal, which is much hated in the Loyalist community, and to maintain Northern Ireland’s connection with the UK.