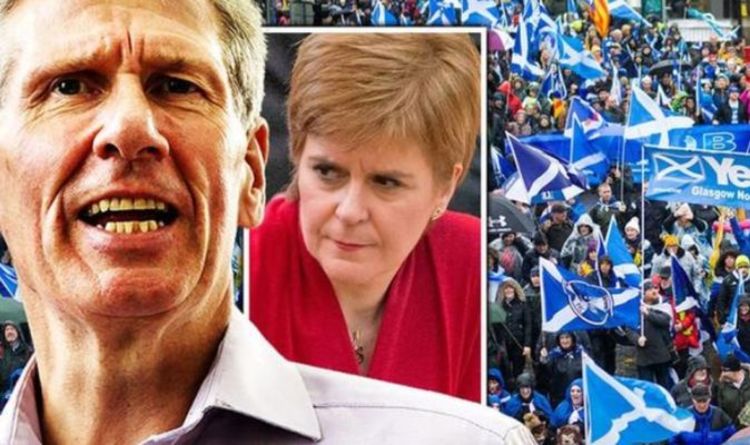 Kenny MacAskill made the reference to the famous Charles Dickens novel when putting forward a motion to establish an Independence Convention at the ALBA Party conference. The proposal, approved by delegates at the event in Greenock today calls for a group to be established from all Scotland’s elected politicians “to give support and substance to the Scottish Government’s independence negotiating position” in a future vote.

Mr MacAskill, who was elected as the party’s deputy leader today, said: “Independence is what motivates us, it’s a cause that drives us, it’s a dream that will never die.

“We know without independence, there can be no recovery [from coronavirus].

“The time to push for independence is now. Steps must be taken forthwith, not deferred to the never ever. It’s our people’s need and it’s our nation’s right.

“Mandate after mandate has been given to Scotland’s Government to act, the electoral basis and constitutional changes exist, it is time.”

The former Scottish Justice Secretary continued: “No more must we be told to wait, nor must we be told it’s dependent on Boris Johnson’s consent or its timescale can be set by him.

“Scotland has comprehensively rejected him as they have every Conservative Prime Minister before I was even born.

“Seeking a gold plated referendum from this Tory party has as much chance of success as a hungry orphan pleading for more in Charles Dickens’ Oliver Twist.

“If our request is denied, then we must act now. Not cower or flea. All and every democratic channel must be pursued.”

In an apparent attack on the SNP, the East Lothian MP went on to say offering “empty rhetoric” was “inadequate” to bring forward a second vote.

He stressed: “Leadership and courage needs to be shown, sadly they have been absent for far too long.

“Legal options, forsworn, if not opposed by the Scottish Government, need taking to all and every court, diplomatic and international appeals must be made and in the court that matters most, that of Scottish public opinion, there must be action.”

But Ian Murray MP, Labour’s Shadow Scottish Secretary, said of the comments: “Nicola Sturgeon may be prone to artfully dodging questions but this isn’t Oliver Twist.

“Scotland doesn’t want any more of the division and psychodrama ALBA and the SNP are offering, and if the nationalists spent as much time on child poverty as they do banging on about independence we would make sure there were no poor children in Scotland like Oliver Twist portrays.”

Meanwhile today, Alex Salmond has been confirmed as the leader of the ALBA Party.

Mr Salmond – who has led the party on an interim basis since its inception in March of this year – was elected unopposed, receiving a standing ovation from the few hundred delegates at Greenock Town Hall.

Mr MacAskill, one of the most high-profile defections from the SNP to the new party, won the depute leadership by 837 votes to 323, defeating Glasgow councillor Michelle Ferns.

The East Lothian MP was among the first to shift from the SNP to ALBA, which fielded candidates in this year’s Scottish Parliament election but failed to win a seat.

Another high-profile defection, Chris McEleny, was also confirmed as the party’s new general secretary – a post he has also held on an interim basis.

11/09/2021 Politics Comments Off on Please Boris, can I have a referendum? Sturgeon mocked as ‘Oliver had more chance of win’
Markets