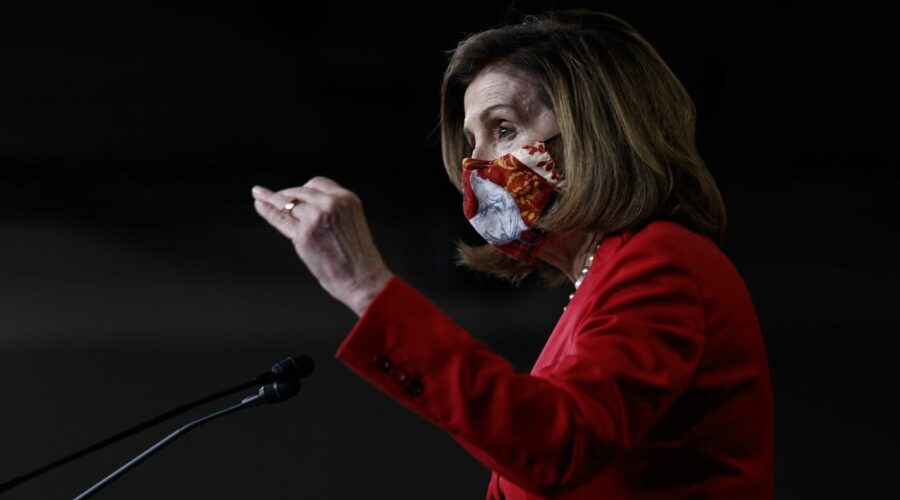 Nancy Pelosi is standing for election Sunday for what may be her last run as speaker of the House, with a slimmer Democratic majority and the progressive and moderate wings of her party both clamoring for a new generation of leadership.

Yet neither flank of the Democratic Party is offering an alternative to Pelosi when Congress opens its 117th session at noon on Sunday with the election of a speaker as one of its first orders of business.

“I’m fine,” Pelosi said last week when asked whether she has the support to continue as speaker, where the Democratic majority has shrunk to 11 votes from 37 after Republican gains in the November election.

For the past two years, Pelosi has been the Democrats’ main foil for President Donald Trump, and that’s helped keep her caucus unified despite the ideological spread from progressives like New York Representative Alexandria Ocasio-Cortez to centrists like Representative Josh Gottheimer of New Jersey. For the next term, Pelosi’s challenge is to keep the party marching behind President-elect Joe Biden’s agenda.

Pelosi, 80, the only woman to hold the speaker’s gavel, faced a mini revolt in 2019 after Democrats regained the House majority in the midterm elections. Fifteen members of her party cast their ballots for someone else as speaker or voted present, and at least 10 of them will be part of the Democratic delegation again this year.

Republicans have tried to stoke dissent among Democrats, particularly those from closely divided districts. Dan Conston, president of the Congressional Leadership Fund, the super-PAC for House Republicans, tweeted that, “We view any weak-kneed Democrats voting present or *conveniently* skipping the vote as a move to enable Pelosi and the left’s radical agenda — we’ll be sure voters know exactly what they did.”

Republican members will nominate their leader, Representative Kevin McCarthy of California, for speaker. But the nominee of the majority party typically sails to victory, and there’s been no late entry by another Democrat seeking to try to topple Pelosi.

There still may be some tense moments during the roll call vote, which will take longer than usual and extend into the evening due to procedures in place because of the pandemic. The winner must gain an actual majority — more than 50% of all the votes cast by both parties. Democrats hold a 222-211 advantage in the next Congress — with two House seats currently still open — leaving Pelosi little room for party defections.

“It is clear that we’re going to need to unite around a Democratic speaker and not Kevin McCarthy,” said Representative Pramila Jayapal of Washington state, chair of the 100-member Congressional Progressive Caucus.

“I have no doubt in my mind we are going to elect Nancy,” said House Majority Leader Steny Hoyer.

Each lawmaker who shows up on Sunday can nominate and vote for people who aren’t even members of Congress, or even vote “present,” rather than for their party’s nominee, a move that lowers the threshold for achieving a majority.

If no candidate emerges with a simple majority of all the votes cast for a named person, the balloting would continue until someone passes the 50% threshold. The last multiple-ballot speaker election was in 1923, when the winner wasn’t decided until the ninth ballot.

Ross Baker, a professor of American politics at Rutgers University, said Pelosi will benefit from “consensus across ideological lines in the House caucus that a public battle right now is bad optics.” Democrats need to show they’re ready and able to work with the incoming Biden administration to get things accomplished, he said.

Among those who’ve publicly stated their intentions, Slotkin, who represents a Republican-leaning district, has already said she would vote “present,” as she did in 2019. Golden, also from a swing district, has said he will not vote for Pelosi.

Schrader’s office confirmed he’ll back Pelosi this time around, as will Cooper. “I will vote for Pelosi for Speaker because she has led a contentious Democratic caucus well during the pandemic and the Trump presidency,” Cooper said.

“You’ll find out when my vote is tallied,” Bowman said in a recent interview on CNN’s “State of the Union.” On the same program, Bush said that, “What I’m going to do is make sure that the voices of the people of St. Louis are heard, and that we have what we need, and so you’ll find out then.”

Ocasio-Cortez has been among the most vocal Democratic House members calling for current leadership to give way to a younger generation. But in an interview with the Intercept published in December, she said, “the left isn’t really making a plan” for how to accomplish that in the near future. Her office didn’t return emails seeking comment on Pelosi’s election.

Pelosi committed in 2018 to not seeking the speakership beyond 2022 in response to demands from younger Democrats seeking generational change. Talking with reporters last month, Pelosi declined to directly respond to a question about that commitment stands.

“We never expected to have another term now,” she said. “I consider this a gift.”