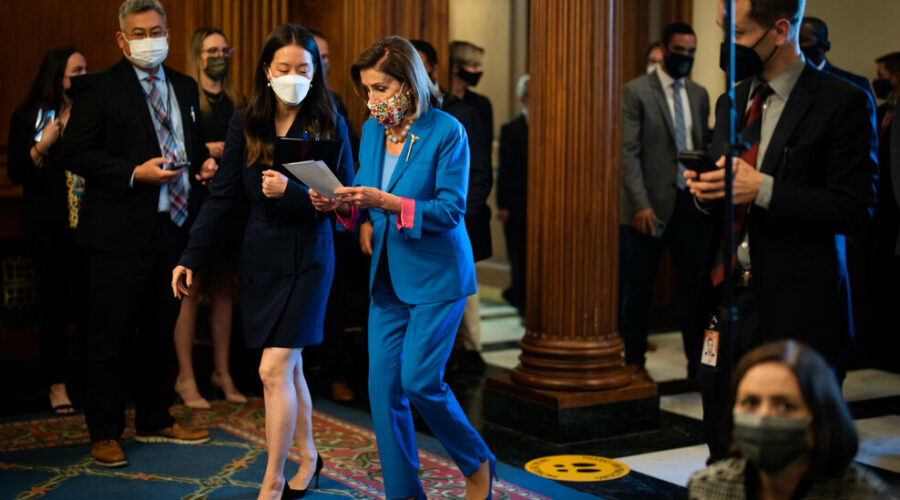 Congress managed to keep the government from shutting down after midnight, but President Biden’s economic agenda, including a popular infrastructure bill, was ensnared in an intraparty battle. 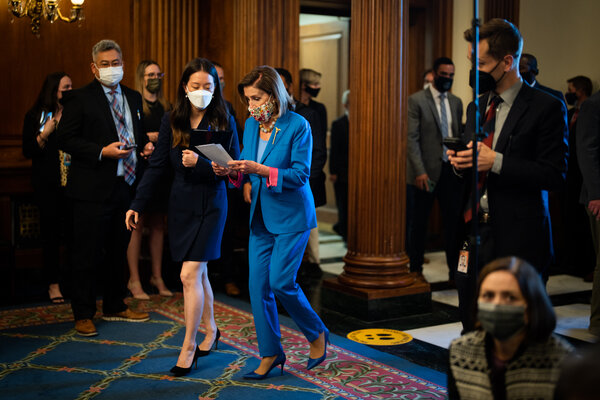 By Jonathan Weisman and Emily Cochrane

WASHINGTON — A bipartisan, $1 trillion infrastructure bill that is a pillar of President Biden’s agenda hung in the balance on Thursday night, as Democrats fought to corral the votes to pass legislation that had become mired in a broader internal battle over the party’s ambitions.

Speaker Nancy Pelosi and top members of Mr. Biden’s team worked into the evening at the Capitol in a frenzied effort to strike a deal between feuding factions and move forward on the expansive public works measure, which passed the Senate in August on a wave of bipartisan bonhomie.

Centrist Democrats and a handful of House Republican allies remained hopeful that the measure could squeak past a blockade of liberal Democrats, who have pledged to thwart its passage until the Senate approves a $3.5 trillion climate change and social safety net bill.

But the divide on that larger bill, between progressives and more conservative Democrats, appeared only to be growing wider and angrier.

The House and Senate did pass — and Mr. Biden signed — legislation to fund the government until Dec. 3, with more than $28 billion in disaster relief and $6.3 billion to help relocate refugees from Afghanistan. That at least averted the immediate fiscal threat of a government shutdown, clearing away one item on the Democrats’ must-do list, at least for two months.

But a planned Thursday vote on the infrastructure bill — a compromise plan that would invest heavily in the nation’s roads, bridges, highways and climate resiliency projects, delivering billions of dollars in projects to lawmakers’ states and districts — slipped into the night without the majority needed.

The measure, which would provide $550 billion in new infrastructure funding, was supposed to burnish Mr. Biden’s bipartisan bona fides. It would devote $65 billion to expand high-speed internet access; $110 billion for roads, bridges and other projects; $25 billion for airports; and the most funding for Amtrak since the passenger rail service was founded in 1971. It would also begin the shift toward electric vehicles with new charging stations and fortifications of the electricity grid that will be necessary to power those cars.

But progressive leaders were threatening to vote it down until they saw action on the legislation they really wanted — a far-reaching bill with paid family leave, universal prekindergarten, Medicare expansion and strong measures to combat climate change.

That ambitious plan was in peril on Thursday as conservative-leaning Democrats made it clear they could never support a package anywhere near as large as Mr. Biden had proposed. Senator Joe Manchin III of West Virginia told reporters that he wanted a bill that spent no more than $1.5 trillion, less than half the size of the package that Democrats envisioned in their budget blueprint.

And he had a blunt message for the House progressives. “I’ve never been a liberal in any way, shape or form,” he said. If they wanted their way, he advised, “elect more liberals.”

Representative Ilhan Omar of Minnesota, a leader of the House Progressive Caucus, fired back: “If the senator thinks electing more Democrats is how you get it done, then that is something he should say to the president, because this is the president’s agenda.”

Mr. Manchin spoke out about his position after a memo detailing it was published in Politico on Thursday.

The document was instructive in ways well beyond the spending total. His bottom-line demands included means-testing any new social programs to keep them targeted at the poor; a major initiative on the treatment of opioid addictions that have ravaged his state; control of shaping a clean energy provision that, by definition, was aimed at coal, a mainstay of West Virginia; and assurances that nothing in the bill would eliminate the production and burning of fossil fuels — a demand sure to enrage advocates of combating climate change.

On provisions to pay for the package, he was more in line with other Democrats, backing several rollbacks of the Trump-era tax cut of 2017, including raising the corporate tax rate to 25 percent, up from 21 percent; setting a top individual income tax rate of 39.6 percent, up from 37 percent; and increasing the capital gains tax rate to 28 percent, another substantial boost.