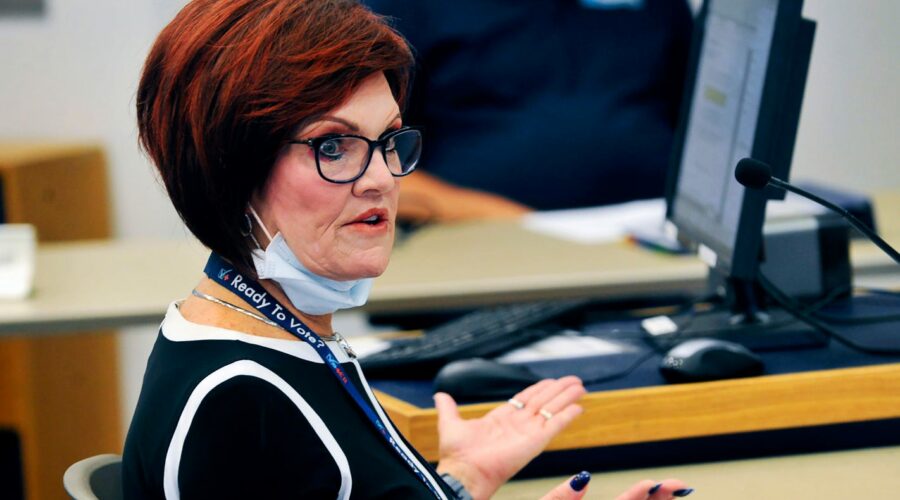 DES MOINES, Iowa — It had been eight years since a Republican candidate even stepped forward to challenge Democrat Roxanna Moritz as the top elections official in Scott County, Iowa.

Running unopposed in 2016 and 2020, Moritz had become, over her four terms as auditor, the top vote-getter ever in this swing-voting county along the Mississippi River, the third most-populous in the state.

Moritz’s abrupt resignation last month came after months of tension that degenerated into personal attacks and threats of violence. Her departure and partisan moves since then are signs that an office long viewed as nonpartisan is now fair game in the political fight about trust in the nation’s elections.

“We took a lot of crap in my office, all of us,” Moritz said in an interview, describing angry, sometimes threatening calls from the public accusing her of fixing the 2020 election. “It was all partisan intimidation.”

This undated photo shows Former Scott County (Iowa) Auditor Roxanna Moritz. The drama surrounding a sudden retirement in the position that oversees elections in one of Iowa's most populous counties has voting experts concerned about what it could signal about the future. Is the political dustup in Scott County a short-lived local spat or an early warning that these quiet but critical local roles across the country will turn as partisan and politicized as any race for governor or Congress. (Gary Krambeck/ Quad City Times via AP) (Photo: Gary Krambeck, AP)

Republicans who control the Scott County Board of Supervisors said politics played no part in their criticism of Moritz’s handing of a county finance matter last year that led to calls from voters for her resignation.

She is accused of falsifying working hours for poll workers to justify paying them more before the June 2020 primary when the coronavirus pandemic made it difficult to recruit help. The state auditor, Democrat Rob Sand, is investigating.

But the issue festered with a number of Republican voters in Scott County who were upset with the outcome of the presidential election nationally, even though Republican Donald Trump handily won Iowa over Democrat Joe Biden in his bid for a second term.

Moritz said she and her team were subject to a stream of verbal harassment by phone, email and social media, from name-calling to physical threats before and after last year’s election.

“Someone said they were going to come down and burn our building down,” she said. “It was three weeks before the election. And we took it seriously.”

Election administration, long viewed as quiet and nonpartisan, is now contentious, given Trump’s persistent and false claims that widespread fraud cost him reelection.

Trump and his allies, in their failed bid to challenge his loss, filed multiple lawsuits to slow down the formal vote certification process. Trump praised two Republicans on a Detroit-area election board for temporarily blocking the county’s election results, in which Biden won by more than a 2-to-1 margin.

As part of their nationwide effort to rollback access to the ballot, Republicans state lawmakers have pushed legislation to impose fines or criminal penalties on election officials for violating rules. In Iowa, officials now face a fine of up to $10,000 for a “technical infraction” of election rules as part of a new law.

That current reality has led election workers to quit or retire, or has made this line of work unpalatable.

A Republican on the Michigan state election board was not renominated by the party after he voted to certify Biden’s win. A spokesman for the County Commissioners Association of Pennsylvania said about one-third of the state’s county election officials have left their posts in the past year and a half. Threats, heavy workloads and misinformation are among the reasons.

Robert Brandon, president and CEO of the Washington-based Fair Elections Center, said it is crucial for these positions to remain as nonpartisan as possible in order to preserve trust in elections.

“If we really had people that were motivated purely by partisan politics running elections, then you would be concerned about the legitimacy of an individual election,” he said. “It would be a terrible turn in this country to undermine what is the most important part of our democratic process.”

In Scott County, the GOP-controlled board appointed a Republican who is a former Davenport alderwoman as the new county auditor. The board opted against a special election out of concern for its cost and efficiency, said the chairman, Ken Beck.

“There was nothing political about this. An appointment is allowed by law,” he said. “I didn’t think it was worth the money to have such a small percent of the electorate turn out. Is that a fair election?”

The party-line decision drew a rapid response by Iowa Democrats. With help from Iowa Democratic officeholders and national groups, the party is trying to collect more than 10,000 signatures to allow a special election.

Elesha Gayman, the county’s Democratic Party chairwoman, spoke of then outreach to organized labor, the NAACP, voting rights advocates and other groups with an interest in who is the auditor.

Appointee Kerri Tompkins has said her mission is not to advocate for voting laws. “This is a role that I don’t set policy,” she told The Quad City Times last week. “My job is to follow the law.”

The political drama is just the latest to beset this small metro county at the center of the post-2020 election storm.

The country’s Republican chairman, former state legislator Dave Millage, was forced to resign in January after criticizing Trump’s actions related to the Jan. 6 attack by the then-president’s supporters on the U.S. Capitol.

The county, which narrowly tipped to Biden, also is part of the 2nd Congressional District, where Republican Mariannette Miller-Meeks beat Democrat Rita Hart by six votes. It was the closest U.S. House race in almost 40 years.