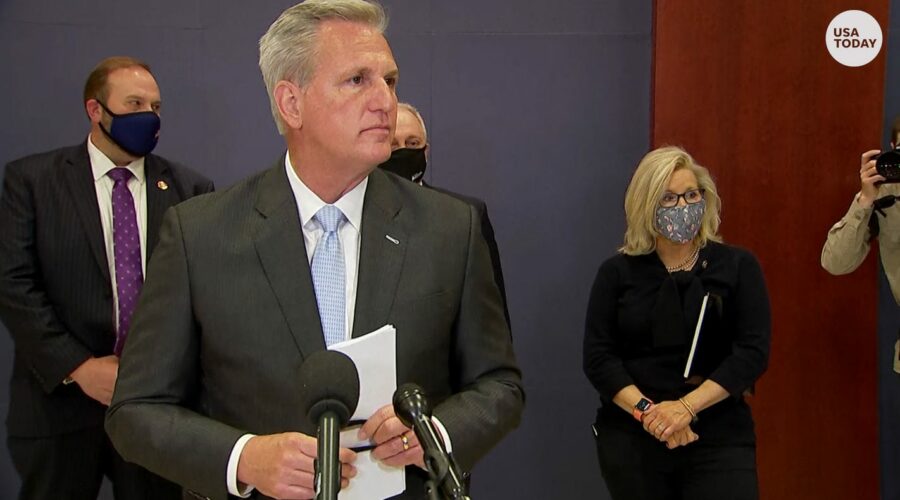 In yesterday’s OnPolitics, we wrote about the GOP’s continuing battle on moving beyond former President Donald Trump’s presidency.

The latest clash: House Minority Leader Kevin McCarthy has stepped up pressure on Rep. Liz Cheney over her recent comments about Trump.

It’s Mabinty, with all the day’s political drama.

In an interview on Fox News Channel, McCarthy claimed rank-and-file concerns about Cheney’s “ability to carry out her job” after she traded insults with Trump. (Reminder: Cheney is the No. 3 House Republican.)

“I have heard from members concerned about her ability to carry out her job as conference chair, to carry out the message,” McCarthy said. Instead of backing Cheney, McCarthy essentially planted himself in the camp of her critics.

More context: In February, conservatives unhappy over Cheney’s confrontations with Trump lost a secret ballot vote of House Republicans aimed at ousting her from her leadership job, 145-61.

Will Cheney keep her leadership role? The fight puts the GOP in the awkward position of seeking to oust its highest-ranking woman from her post when the party is trying to erode Democrats’ decisive advantage among female voters.

There’s one person coming to her defense: Sen. Mitt Romney.

“Every person of conscience draws a line beyond which they will not go: Liz Cheney refuses to lie,” Romney tweeted. “As one of my Republican Senate colleagues said to me following my impeachment vote: ‘I wouldn’t want to be a member of a group that punished someone for following their conscience.’ “

There’s still a pandemic going on

COVID-19 still his top priority, President Joe Biden has set a new vaccine target: He wants 70% of U.S. adults to have at least one COVID-19 shot by July 4. The White House says the U.S. will have enough vaccine supply to cover every American adult by the end of May, although it will take longer to administer those vaccines.

The administration plans to:

What else is going on?

Happy Star Wars day, nerds. May the 4th be with you. — Mabinty

04/05/2021 Politics Comments Off on OnPolitics: The GOP takes on Liz Cheney
Markets