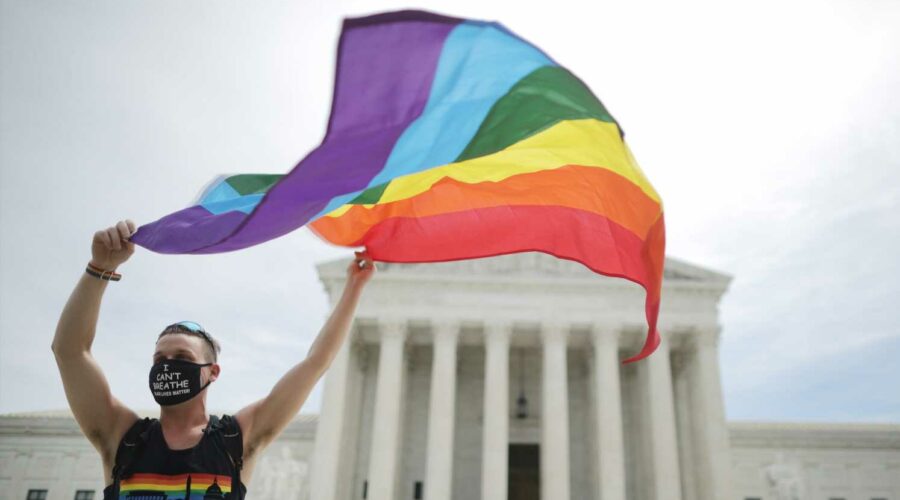 Joseph Fons holding a Pride Flag, stands in front of the U.S. Supreme Court building after the court ruled that LGBTQ people can not be disciplined or fired based on their sexual orientation June 15, 2020 in Washington, DC. With Chief Justice John Roberts and Justice Neil Gorsuch joining the Democratic appointees, the court ruled 6-3 that the Civil Rights Act of 1964 bans bias based on sexual orientation or gender identity. (Photo: Chip Somodevilla, Getty Images)

OnPolitics is back from the holiday weekend. So what did you miss?

“We’re free because they were brave. Here on these gentle rolling green hills and across America and around the globe lie buried the heroes of the greatest experiment the world has ever known, ever seen,” Biden said at Arlington National Cemetery.

The president also visited three survivors of the Tulsa Race Massacre Tuesday to commemorate one of the bloodiest race massacres in U.S. history.

Plus, a showdown between Texas Republicans and Democrats caused national headlines.

It’s Mabinty, with the news of the day.

A year after the Supreme Court handed down the landmark Bostock v. Clayton County decision barring workplace discrimination against LGBTQ employees, gay rights advocates continue to benefit while bracing for a more challenging legal environment ahead.

While that ruling has been heralded by gay rights groups as the most important outcome since the 2015 decision legalizing same-sex marriage, the celebration has been muted by other issues on the horizon. The issues:

Those competing interests – LGBTQ rights and the First Amendment’s protection of religious freedom – will come head to head in one of this year’s most closely watched cases at the high court.

In the case headed to SCOTUS, a Catholic charity has declined to honor Philadelphia’s requirement that it screen same-sex couples as potential foster parents because the mandate runs counter to its religious beliefs. A decision in the case is expected this month, and observers believe the court, with its 6-3 conservative majority, will side with the Catholic group.

What else is going on in Washington:

It got ugly in Texas

The fight over Texas Republican lawmakers’ attempts to rewrite election laws reached a fever pitch over the Memorial Day weekend.

Senate Bill 7, a restrictive voting bill, failed to pass Sunday night after Democrats walked out of the House chamber before a midnight deadline.

In response, Gov. Greg Abbott said he would veto funding in the state budget for lawmaker salaries, an exclamation point to a dramatic final weekend.

SB 7, known as the Election Integrity Protection Act, bans 24-hour voting and drive-thru voting, disproportionately affecting people of color. It also makes it a crime to aggregate ballots for a candidate, also known as vote harvesting, in addition to creating “at least 10 categories of new or enhanced criminal penalties related to elections,” the Austin American-Statesman reports.

Texas Democrats who walked out of the House chamber have called for Congress to pass national legislation that would protect the right to vote.

Happy June, the best people are born this month 😉! —Mabinty

01/06/2021 Politics Comments Off on OnPolitics: A SCOTUS decision could restrict LGBTQ rights
Markets