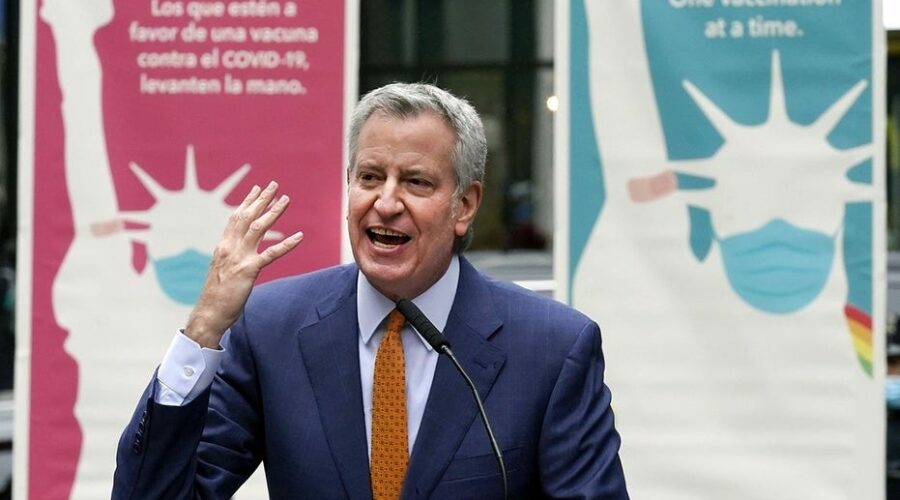 New York City Mayor Bill de Blasio on Monday issued a “preemptive strike,” mandating that all private sector employees in the Big Apple be vaccinated against COVID-19 amid the new threat posed by the omicron variant beginning Dec. 27.

De Blasio, whose term is set to expire in a matter of weeks, broke the news during an interview on MSNBC’s “Morning Joe” Monday morning.

“We’ve got omicron as a new factor, we’ve got the colder weather, which is going to really create additional challenges with the delta variant, we’ve got holiday gatherings,” de Blasio said.

“We in NYC have decided to use a preemptive strike to really do something bold to stop the further growth of COVID,” de Blasio said.

De Blasio described the move as a “first in the nation measure,” to cover all private sector employers in New York City with the requirement.

“We’re going to have other measures as well to focus on maximizing vaccinations quickly, so we can get ahead of omicron and all the other challenges we’re facing right now because of COVID,” de Blasio said.

De Blasio’s office also said it is broadening “Key to NYC,” its program requiring proof of vaccination for indoor dining, fitness and entertainment–expanding the measure to include 5- to 11-year-olds. De Blasio’s office said “approximately 20%” of that age group is vaccinated in New York City.

“Get that shot by 12/14 for our youngest New Yorkers,” de Blasio’s press secretary tweeted.

The measure will also require proof of a second vaccine dose by 12/27.

De Blasio’s move comes while the Biden administration has faced a string of legal losses over its COVID-19 vaccine mandates, with a number of federal judges across the nation halting the implementation of the rules claiming overreach by the executive branch — as the Justice Department plans to “vigorously defend” the mandates in court.

The Biden administration last month unveiled the Labor Department’s Occupational Safety and Health Administration COVID-19 vaccine rule, which required employers with more than 100 employees to ensure that all workers are either fully vaccinated or subject to weekly testing and mask wearing.

The mandate also hit businesses that fail to comply with fines reaching as much as $14,000 per violation with the potential for multiple citations.

After the U.S. Court of Appeals for the Fifth Circuit upheld its stay on the mandate, OSHA suspended enforcement of the rule.