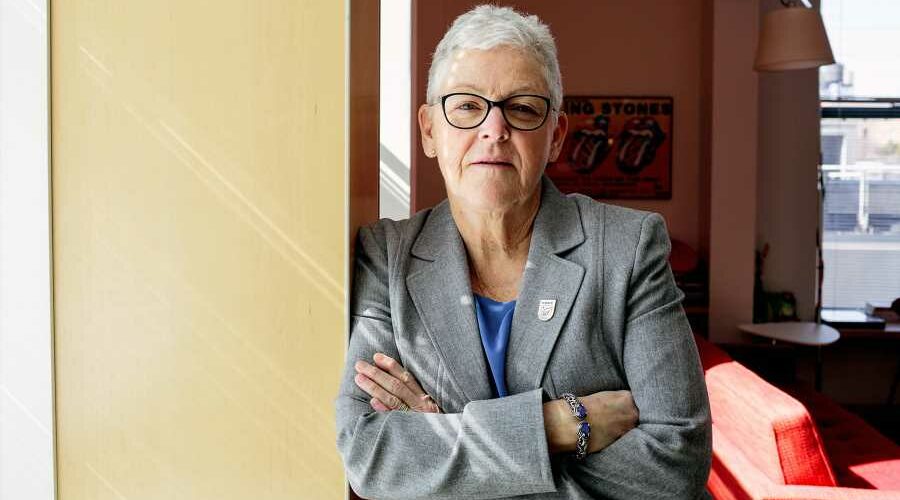 Gina McCarthy logged on to Zoom one day in early February and saw a crowd of Cabinet secretaries and other agency chiefs staring back at her, a Brady Bunch of senior bureaucrats. It was the first meeting of the Biden administration’s National Climate Task Force, a team of nearly two dozen top officials from across the government. Created by executive order, the task force is in charge of jump-starting Biden’s “whole-of-government” climate agenda and putting the government on track to meet ambitious targets like decarbonizing the nation’s power sector by 2035.

To lead this task force, Biden turned to McCarthy, naming her to be the White House’s domestic climate czar. McCarthy, a 66-year-old New Englander with the chewy Boston accent to prove it, knows a thing or two about how to wield executive power in the fight against climate change. As the head of Environmental Protection Agency under former President Barack Obama, McCarthy led the creation of the Clean Power Plan, which created the first national emissions standards for power plants, and a slew of other agency-level actions to reduce pollution and transition to clean energy. Obstructionist Republicans lambasted McCarthy as an out-of-control bureaucrat; Democrats hailed her efforts to meet the greatest political and policy challenge of our lifetime.

Now, McCarthy, who spent much of her career inside the EPA, is one of two key Biden aides, along with former Secretary of State John Kerry, leading what climate experts describe as the most far-reaching climate policy agenda of any president in history. McCarthy was still getting used to her new title and perch when she spoke with Rolling Stone in February; then again, there has never been a role quite like hers in the White House before, tasked with prodding every federal agency to incorporate clean energy and climate change into its mandate.

It’s an enormous job, but McCarthy didn’t sound the least bit daunted. By all indications a savvy operator when it comes to the federal bureaucracy, she sounded almost giddy at the prospect of using every tool at her disposal to make Biden’s agenda a reality. “I’m looking at regulations, I’m looking at standards, I’m looking at our programs and how we use them,” she says. “The president isn’t interested in taking anything off the table.”

How is Biden’s “whole-of-government” approach different from Obama’s approach?
President Obama pulled together a plan, but that plan had discrete tasks. It did not bring it all together under one task force with one overwhelming theme, which is to use every tool at your disposal in every agency and to start thinking about climate change in every decision you make. President Biden is all about using climate change not to address just the planetary problem, but really to use it as a way to rebuild the economy. So this is about growing jobs. And [another] major component here is to look at how we can deliver on his environmental justice promises.

I really think that this is a more sophisticated approach than President Obama used. We’re using the creativity and the energy that’s been pent up across the agencies and unleashing that. Most recently, we had a release of new research dollars, $100 million from DOE [Department of Energy] that’s going to clean energy. We had a release of a $180 million from DOT [Department of Transportation] that’s going to look at new low-carbon-energy solutions. So there’s great things happening that may have been pent up for a while, but now you’re going to get lots of support for those ideas.

The administration’s goal is for 40 percent of the benefits of climate policies to go to disadvantaged communities. How will the public be able to know that progress is being made on that?
One of the things that President Biden called for was a White House Environmental Justice Advisory Council. It’s just being pulled together now. The reason to have that is really twofold. One, this is going to have scorecards. We’re actually going to look at what every single agency is doing or not doing and provide the public with all kinds of information. And part of this task force is really about early engagement. We’re not here to tell environmental-justice communities what they ought to want. We are here to say, “Forty percent of the investments we’re making on clean energy are going to be used to benefit your communities. How can we make sure they’re providing the benefits that you want?”

So it’s everything from going out fast on housing needs, which are many; on public transit, which are many. It’s going to start looking at opportunities for green spaces, heat-island impacts [in which dense urban areas experience higher temperatures], I mean you name it. We know a lot of communities have been built around a big old fossil fuel utility that may no longer be called on to generate electricity. How do we make sure that those workers are put back to work? And so [that] is another very large effort that’s well on its way — to identify ways in which we can give people new opportunities where they live. And that’s going to be a really important consideration to ensure that the jobs that we’re producing are high-paying, union accessible.

In regard to Trump’s assault on environmental protections, which of his rollbacks are you most concerned about, and how hard are they going to be to undo?
We have a list — actually, that was in the president’s first executive order — that has more than 100 of the rollbacks that we have to take a look at. Some of the ones early out of the gate are going to be methane. There was a rule [under Obama] that required methane to be captured from leaks in the oil-and-gas sector. We’re going to revisit that, reestablishing that rule.

We’ve already told people that 2035 is the time window for cleaning up the power sector. And so we’re having conversations with the utility sector, and that’s going to involve not just standard-setting but also making sure that we look at transmission bottlenecks or other opportunities to make that transition to clean energy, which the utilities are not arguing about. They’re just looking for help to see how they can make that [2035] window work.

And the third is we’re looking at the auto sector. We’re going to start talking to car manufacturers about how quickly we can get to zero [emissions] in the car fleet.

You’ve said before that in terms of possible other policies to implement, levers to pull, that nothing is off the table. How do you see a carbon tax potentially fitting into the administration’s climate policy toolkit?
Well, to establish a carbon tax, it’s going to take congressional action. And so I think it’s really important that those issues be talked about in Congress, and as legislation comes up, we will certainly be interested in weighing in. But for our purposes and mine certainly, I’m looking at executive authority. I am not in a congressional authority to actually be moving that forward. But I’m certain that the president isn’t interested in taking anything off the table.

The president’s executive orders try to meet the needs of coal communities. But of course, there’s skepticism from those communities. Why should they think and feel differently about the Biden administration’s pledges to reinvent those communities and get people to work?
The opportunity that we have here is to understand that coal is not competitive. It is not winning in the clean-energy future. We know what we have to do to address climate change. So there’s an opportunity that the president’s trying to capture, to say, “That doesn’t mean you can’t have a productive and economically viable community.” And so we’ve identified opportunities for that — for the transition of skills that are useful in coal mining and in coal-based utilities, in the oil-and-gas sector — that we hope will be able to get some resources through legislation and other means.

So it’s not about deciding today that their jobs don’t matter. It’s about recognizing that that transition is happening; it’s going to continue to happen. If you look at the renewable numbers back in 2020, we had a huge increase in both solar and wind. And most of that increase was in states that have Republican senators. This is about recognizing where the future is and how we capture it again. We have to advance manufacturing. We have to be the clean-energy country if we want to compete against China and get those jobs here instead of elsewhere. You’re not going to build that on the technologies of the past.

12/03/2021 Politics Comments Off on Nothing's Off the Table: Gina McCarthy Has Big Plans for the Climate Fight
Markets