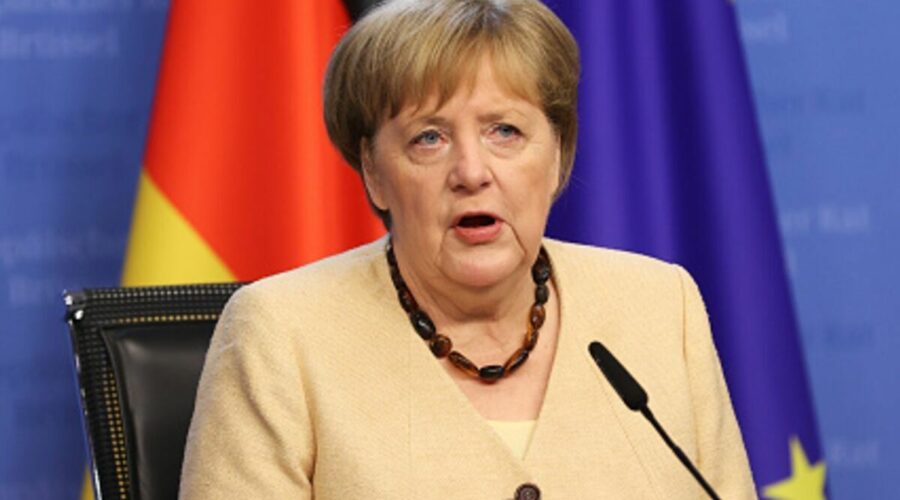 Vladimir Putin speaks at the Economic Forum in St Petersburg

The former German Chancellor said “the question is not currently being asked” but she did not rule out being able to mediate in the Russia conflict at a later stage. The comments sparked the brutal response of the Baltic Defence team which promptly Tweeted: “Thanks but no thanks.

“You did an ‘outstanding’ job with Minsk 1&2 already.”

Speaking to RND on Friday, Mrs Merkel said she tried last year to talk to Russian President Vladimir Putin about a new European security order and sees the reason for the failure in the upheavals in the West at the time.

She said: “On the one hand, Putin was no longer ready for a Normandy-style summit.

“On the other hand, I did not succeed in creating an additional European-Russian discussion format about a European security order alongside the Normandy format.”

Asked whether Putin waited with his attack on Ukraine until she was no longer in office, Merkel said: “My departure may have been a contribution, such as the elections in France, the withdrawal of troops from Afghanistan and the stagnation of the implementation of the Minsk Agreement.”

Mrs Merkel admitted her own powerlessness at the end of her term: “It was clear that I would not be in office much longer, and so I simply have to state that various attempts in the past year have had no effect .”

With a view to Europe’s security system, the Cold War has not been overcome. One must take Putin seriously, she warned.

His brutal attack is a turning point in European post-war history that will have repercussions for many years to come.

She supported the course of her successor Olaf Scholz (SPD).

They said: “That’s why I think it’s right that the West is working for the existence of Ukraine without becoming part of the direct military conflict.”

The leaders of Germany, France and Italy, all criticised in the past by Kyiv for support viewed as too cautious, visited Ukraine on Thursday and offered the hope of EU membership to a country pleading for weapons to fend off Russia’s invasion.

Air raid sirens blared in Kyiv as the visit by French President Emmanuel Macron, Germany’s Olaf Scholz and Italy’s Mario Draghi began, with the leaders touring a nearby town wrecked early in the war.

After holding talks with Ukrainian President Volodymyr Zelensky, the leaders signalled that Ukraine should be granted European Union candidate status, a symbolic gesture that would draw Kyiv closer to the economic bloc.

Mr Scholz said Germany had taken in 800,000 Ukrainian refugees who had fled the conflict and would continue to support Ukraine as long as it needs.

He said: “Ukraine belongs to the European family.”

18/06/2022 Politics Comments Off on ‘No thanks!’ Merkel told to butt out as former Chancellor offers to mediate with Putin
Markets