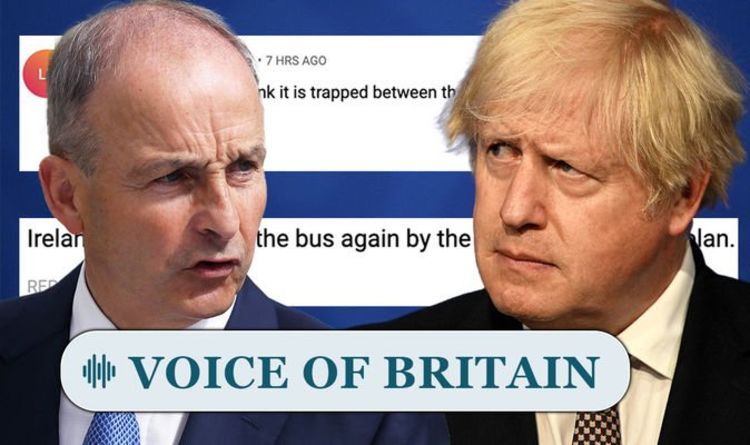 Now Ireland has complained that it is caught between the two sides over the row about the Irish border.

But Express.co.uk readers showed little sympathy as they ripped into Brussels for “throwing Ireland under the bus” by making the process difficult.

One reader said: “Why would Ireland think it is trapped between the UK and EU in discussions about Northern Ireland? It is EU.”

Another added: “Ireland thrown under the bus again by the EU in their back up plan.”

A third reader wrote: “We are not in the EU anymore so you will have to use something/someone else as a whipping post because having left you cant blame us.”

And a fourth simply said: “No sympathy.”

It comes after Neale Richmond, European affairs spokesman for Fine Gale, which is the second biggest party in Ireland’s coalition government, ripped into the UK Government this week.

He told the FT: “We spend a lot of time second-guessing what the British Government is trying to achieve.

“It’s not in Ireland’s interests to chase the nonsense the DUP are talking about.”

But Mr Richmond did admit that the North-South relationship is currently in a “difficult position”, before adding he is hopeful that an agreement over the protocol is possible.

Micheal Collins, a former Irish ambassador to the US and Germany, warned Ireland that the EU is unlikely to act in a way that would “undermine the integrity of the EU single market”.

He said: “The one thing we cannot do is to seek to persuade the EU to take action which would in any way undermine the integrity of the EU single market.

“First of all they wouldn’t do it, and second of all it wouldn’t be in our interests because it’s our single market as well.

“Brexit isn’t going to end up in a situation where everybody is 100 percent happy.

“That’s just not the way Brexit is.”

Meanwhile, the UK’s Brexit negotiator Lord Frost is set to resume talks with his EU counterpart Maros Sefcovic next month.

They are said to be aiming to reach an agreement to remove Brussels’ red tape on Northern Ireland.

A UK Government spokesman said: “It’s clear that the Protocol is not working in its current form and significant changes are needed to ensure that it is sustainable for the future.

“The Protocol is causing disruption to the everyday lives of people in Northern Ireland – companies are stopping delivering to Northern Ireland, there are growing difficulties with medicines supplies, and products are disappearing from supermarket shelves.

“We have set out our proposals to resolve the serious issues with the Protocol in exhaustive detail in our Command Paper.

“The EU need to engage with us urgently on these issues – we are ready to move forward in a constructive way.”

06/08/2021 Politics Comments Off on ‘No sympathy!’ Britons lash out as ‘Ireland thrown under bus by EU’ after UK red tape row
Markets