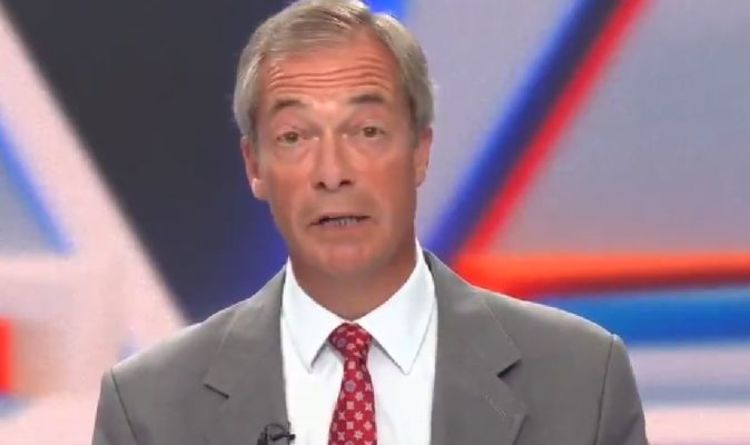 Nigel Farage calls for Boris Johnson to ‘man up’

Nigel Farage has launched a brutal slapdown at Boris Johnson only minutes into his new role as a stat GB News presenter. The former Brexit Party leader attacked the Prime Minister for backtracking over the workplace pilot scheme which would have made Mr Johnson exempt from isolation following his pinging by the Covid track and trace NHS App on Sunday. Mr Farage called on Boris to ‘man up’ and roll out the workplace pilot to the entirety of this country.

Mr Farage said: “I want Boris Johnson to start showing a bit of leadership, to stop being blown around by events.

“This sort of endless dither and chaos.

“Boris man up, open up the workplace pilot to the entirety of this country let’s free the private sector, let’s get the economy moving.

“Let us secure people in their jobs and I think the time has come to make that move.”

Earlier the new GB News host said: “I think they both got it wrong the Prime Minister and the Chancellor.

“I really think they should have gone to work today.

“I really honestly truly do.

“They should have said that the workplace pilot would be extended this week out to every single private company in this country.

Nigel Farage cuts off reporter and apologises for foul language

“Where staff if they have been pinged can go, get a lateral flow test and provided they test negative… and most of them of course will be double jabbed anyway.

“And they can carry on working and those production lines will keep going,” he added.

“The pubs would stay open and indeed the restaurant too.”

Harri was axed from the channel after taking the knee on air in a “breach” of GB News’ standards.

Farage said: “And yes, there was a part-time presenter who made a political gesture that wouldn’t be allowed on any channel in the United Kingdom, and he’s gone – those are the negatives.

“But what about the positives? Why am I here Why have I decided to join GB News full-on?, not just to come in on a Sunday morning, but to launch this show tonight, Farage, and I’ll be here Monday, Tuesday, Wednesday Thursday from 7pm until 8pm?

“I’ll tell you why,” he told the news show, “It’s because I believe in GB News.”