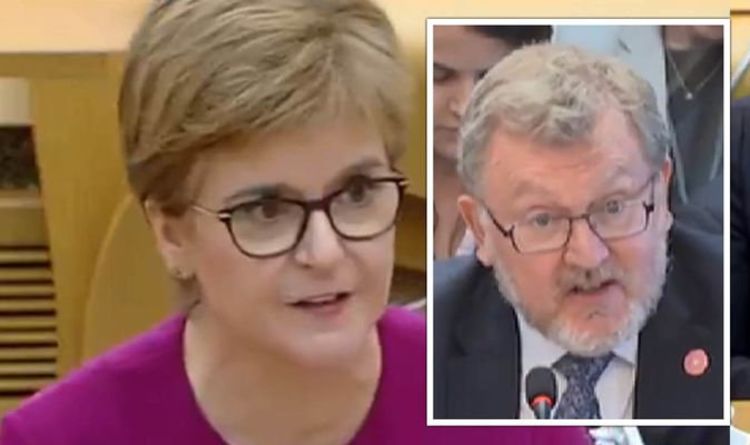 Conservative MP David Mundell has claimed Scottish voters would “recoil” at the prospect of the SNP holding a wild card referendum. SNP Tommy Sheppard has added that it is the democratic right of Scotland to hold a second vote with or without the support from Westminster. Speaking to Express.co.uk, Mr Mundell said: “As far as I’m aware there isn’t support for having a wild card referendum.

“I don’t think there is much polling on it because people haven’t contemplated that the Scottish government would propose going ahead with a referendum without having a legal basis for it.

“I think most people whether or not they support independence would recoil at the prospect of having a wild card referendum.”

He added: “I think most people in Scotland whether they support independence or not would be alarmed to hear that there was now talk of a wild card referendum that didn’t have a legal basis.

“When we did have the referendum in 2014 that was one of the key elements that it was legal, fair, and decisive.

“To have a wild card referendum I think is wholly irresponsible and could only lead to further division and disruption.”

Mr Sheppard told LBC earlier this month that his party plans to go ahead with a referendum as he issued an ultimatum to Boris Johnson.

He said: “It doesn’t really matter if you think circumstances have changed fundamentally or enough.

“It doesn’t matter if you think enough time has passed.

“The thing that top trumps all of that is what do the people in Scotland actually think and what have they voted for.

“They have just voted to have another say on this matter and they elected to Scottish Parliament on that basis. I think that mandate should be respected.

“I think the best thing for the Conservative Government is to work with the Scottish Government to organise that referendum in the way it was done in 2014.

“I hope they will do that but if they don’t, there will be a referendum.

“We have a mandate to deliver on a referendum and if democracy means anything then that has to happen and then it will be for the UK Government to decide whether it respects that or not.”

The SNP won its fourth consecutive term in power at Holyrood in May’s Scottish elections, and Ms Sturgeon insisted that that victory “represents an unarguable mandate to implement the manifesto we put before the country”.

This included plans for another independence ballot, with Ms Sturgeon telling supporters the time to make a decision on Scotland’s future was “approaching”.

While the Prime Minister has so far rejected all calls for another vote, Ms Sturgeon said hoped the two governments could reach an agreement, as happened in 2014, “to allow the democratic wishes of the people of Scotland to be heard and respected”.