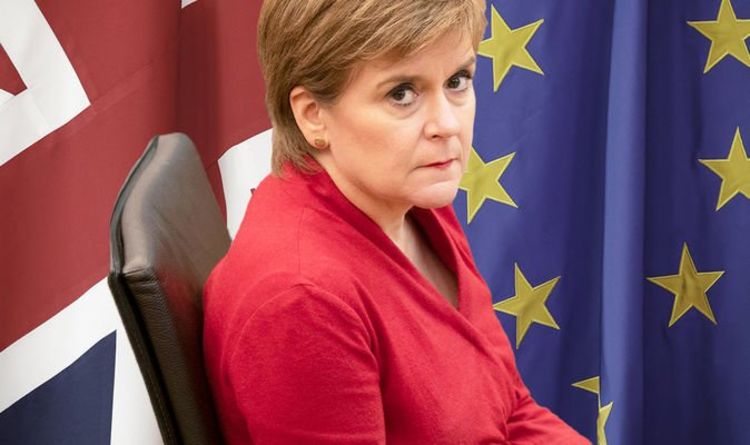 Professor Mark Blyth, part of the First Minister’s economic advisory council, poured cold water on Ms Sturgeon’s Scottish independence hopes. He suggested “pulling apart” more than three centuries of economic integration between Scotland and the rest of the UK would “hurt a lot”.

Speaking ahead of his appointment to the advisory council in July, Prof. Blyth admitted Scottish independence could be “Brexit times 10”.

He said adopting a different currency and economic policy from the remainder of the UK would mean “significant short to medium-term costs.”

In particular, he said it would mean erecting trade barriers with the English market, which is the destination for 60 percent of Scottish exports.

Prof Blyth, a Scots-born academic based in the US, said optimists would argue “how hard could it be” with a country of only four million people “and we have loads of resources.”

In the interview with the Foreign Press Association, Prof Blyth added arguments Scotland needed to leave the UK because of Brexit do not hold water.

He told the outlet: “If your argument is that we need to do this because of Brexit, then Scotland separated from England is the biggest Brexit in history.

Prof Blyth also told the outlet Scotland could opt for “brass-plate independence” where “nothing really changes” and Scotland keeps the pound.

The alternative is regulatory divergence with a different currency and economic policy, which he added: “There’s no way around that.

“We know that because it’s Brexit times 10.”

Prof Blyth also suggested an independent Scotland may need to keep the UK’s Trident nuclear deterrent on the Clyde to get into the EU.

It comes as Ms Sturgeon blamed Brexit for a drop in HGV drivers, which has in turn been blamed for supermarket shortages.

Speaking in Holyrood, she said Scotland needed to address the Brexit “disaster” which she said has caused labour shortages across the country leaving shops running low on supplies.

She told MSPs the labour shortages across the UK were a “direct and shameful result of the Brexit disaster” as politicians could be heard cheering in the background.

She continued: “We must defend our Parliament against UK Government power grabs that are undermining the very principles on which it is founded.

“And as we do so, recognise that the best way not just to protecting this parliament from Westminster but also equipping it with the full powers it needs to build a fairer, more prosperous country.”

The First Minister is also set to restart her campaign for Scottish independence at the SNP conference which starts this week.

SNP members will debate proposals for a new commission it is claimed would show how a border with England could “favourably benefit” an independent Scotland.

A spokesman for the First Minister told The Times: “Scotland has been torn out of the EU against our democratic will, causing massive harm to our economy and society.

“Brexit is inflicting huge labour shortages, leading to empty shelves in our shops.

“Independence will give us the chance to re-join a market around seven times bigger than the UK, while giving us the powers to build a more prosperous and fairer country, instead of having unwanted policies like Brexit imposed on us by Boris Johnson.”