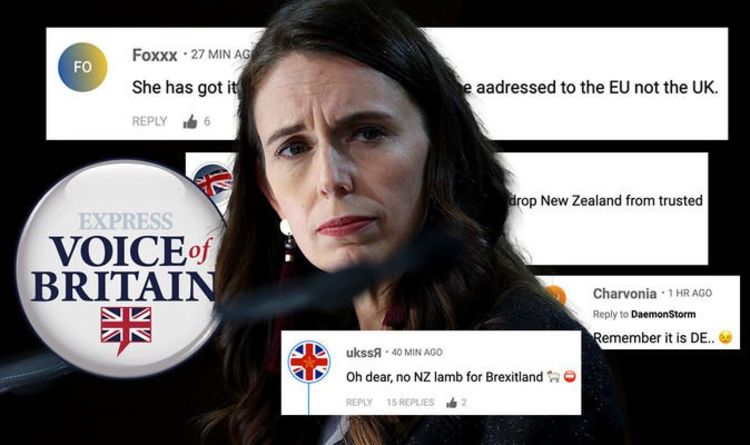 New Zealand’s Prime Minister spoke to the country’s Institute of International Affairs, where she said trade deal talks with Britain were “well-advanced”. Boris Johnson has made joining the Comprehensive and Progressive Agreement for Trans-Pacific Partnership (CPTPP) a priority for Brexit Britain.

In a veiled threat to Brexit Britain, Ms Ardern appeared to suggest New Zealand could block any attempt to join the CPTPP.

Made up of Australia, Brunei, Canada, Chile, Japan, Malaysia, Mexico, New Zealand, Peru, Singapore, and Vietnam, the bloc accounted for £110billion worth of UK trade in 2019.


The Prime Minister said: “Last month we joined consensus on the formation of a working group to negotiate the UK’s accession to CPTPP.


“Other economies will be able to join CPTPP too.


“CPTPP is our highest quality agreement.


“Those aspiring to join will have to be able to meet its high standards.”

When speaking about international relations after the coronavirus pandemic, Ms Ardern added: “Governments will need to re-commit to supporting an open and rules-based regional order; one that’s more sustainable and resilient.
“And we must recommit to doing what we can, to encourage that change.


“We will do so in ways that are pragmatic, that advance our interests, and that are consistent with New Zealand’s values.”


It comes after the EU and US have repeatedly accused the UK failure to properly implement the Northern Ireland Protocol would mean breaking international law.


Now Britons have voiced anger over the veiled threats to the UK’s chances of joining the CPTPP.

Reacting to Express.co.uk‘s initial story, one reader insisted Ms Ardern had “got it wrong” in suggesting the UK must abide by a “rules-based regional order”.


They added: “Her remarks should be addressed to the EU not the UK.”


Another reader added: “If Ardern threatens again then we should drop New Zealand from trusted partners.”


One more suggested: “When the sixth-largest economy in the world comes knocking, doors open.”


And another said: “Take no notice she’ll be gone soon!”

Some readers suggested joining the CPTPP should not be a priority for Brexit Britain, as one reader pointed out: “One week the NZ prime minister criticises attempts to free up the British economy by everyone coming out of the current covid restrictions.

“Then the next week there is meddling on the attempts to get goods flowing more freely between Great Britain and Northern Ireland.


“So, that is three areas affecting Britain’s economic prosperity that the NZ prime minister has been meddling with in just a matter of days.


“Focus on trade deals and enhancing goods flow with friends and allies rather than being seen needlessly to be actively interfering and hindering elsewhere, when trade prosperity between trusted allies is what suits everyone best.”


One user also added: “Truss should rethink any agreement with this woman who controls a country with half the population of London, in fact we should rethink withdrawing any trade we already have.”

At the end of June, New Zealand’s Trade Minister Damien O’Connor suggested the country would focus on strengthening ties with the UK rather than the US.


He said New Zealand was yet to ask Joe Biden’s US administration whether they’d be interested in starting talks.


Mr O’Connor was asked if US trade talks had commenced – he responded: “Not directly, no.


“But the US is really positive about trade. It’s re-engaged in international fora. But it admits it’s got a lot of domestic issues to work on.


“The signals and the engagement we’ve had so far are positive but I think we have to be realistic.”