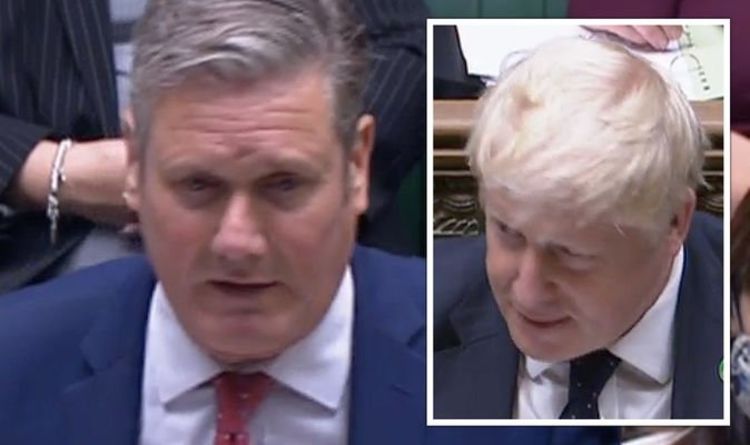 Labour Party leader Sir Keir Starmer snapped at Boris Johnson after his speech on how the Tory Government planned to resolve the issues plaguing social care. Mr Johnson announced that there would be an increase to National Insurance tax, including those above the age of 65. Sir Keir outlined what this plan would mean for millions of workers across the country, including his “poorly paid” care worker sister.

During Sir Keir’s tirade, Boris Johnson continued to shake his head and roll his eyes at the Labour leader’s comments.

Sir Keir said: “Under the Prime Minister’s plans the quality of care received will not improve.

“Unpaid family carers will still be pushed to breaking point, there is no plan for that.

“Working aged adults with disabilities will have no more control under their lives, there is no plan for that.

“Pay and conditions will not improve for care workers, there is no plan for that.

“A poorly paid care worker will pay more tax for the care that they are providing without a penny more in their pay packet and without a secure contract.

He said: “The Prime Minister shakes his head.

“My sister is a poorly paid care worker so I know this first hand.”

Cheers can then be heard from those on the Labour bench.

During his speech to the House of Commons, Boris Johnson admitted that he would be breaking his election to pledge with the introduction of this tax.

The Prime Minister announced a new “health and social care levy” to tackle the social care crisis ignored by successive governments for years.

The tax hike will see Britons and employers paying an additional 1.25 percent in national insurance a year.