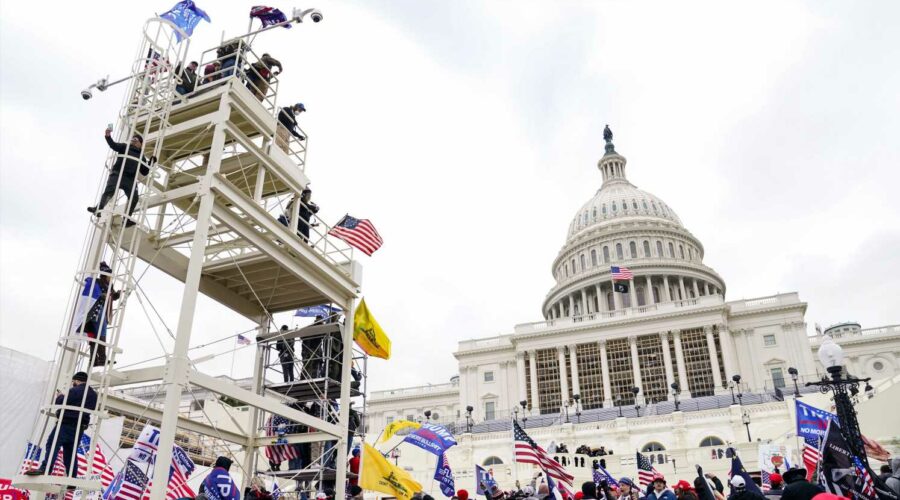 WASHINGTON – The FBI’s unheeded warnings that violence threatened the Capitol Jan. 6 echoed intelligence failures of previous violent attacks in the United States, including mass shootings and the terrorist hijackings of Sept. 11, 2001, according to experts.

“You always find incompetence,” said former Rep. Lee Hamilton, who was vice chairman of the commission that studied the Sept. 11 attacks. “It arrives all the time. Some days the same person can be competent and then incompetent a few hours later. That’s a great concern.”

Congressional committees are reviewing intelligence lapses as part of their investigations to prevent another attack like Jan. 6, when a pro-Trump mob stormed the Capitol, attacked police officers and ransacked the building. The House Oversight and Reform Committee scheduled a hearing Tuesday with FBI Director Christopher Wray and others about failures to anticipate, prepare for and adequately respond to the attack.

Authorities began collecting intelligence about the potential for violence in mid-December through social media posts, websites and warnings from citizens.

U.S. Capitol Police began “considering a significant deployment” after an analysis Dec. 14 warned about “the potential for some issues on the House floor,” according to a Senate report on the attack released June 8.

A Jan. 5 memo from the FBI office in Norfolk, Virginia, offered a grim look at what was about to come. The memo warned of a social media thread that said Congress needed to hear glass breaking and see blood being spilled, and that people should “stop calling this a march, or rally, or a protest. Go there ready for war.”

Although FBI officials later said the threats were unattributed and unconfirmed, the warnings were passed along to Capitol Police. But police took no comprehensive approach to protecting the Capitol before the attack that interrupted the counting of Electoral College votes, left 140 officers injured and five people dead, according to the Senate report.

The lack of response echoed other violent crimes during the last 20 years when warnings weren’t enough to deter the attacks.

“If the FBI had shared information with the CIA and vice versa, my own personal belief is the plot would have been stopped,” said Thomas Kean, a former New Jersey governor who headed the commission that studied the hijackings. “This was an internal thing within the FBI, whether it was a lack of communication or a few people not talking to each other when they should have been.”

FILE – In this Sept. 11, 2001, file photo, smoke rises from the burning twin towers of the World Trade Center after hijacked planes crashed into the towers, in New York City. The coronavirus pandemic has reshaped how the U.S. is observing the anniversary of 9/11. The terror attacks' 19th anniversary will be marked Friday, Sept. 11, 2020, by dueling ceremonies at the Sept. 11 memorial plaza and a corner nearby in New York. (AP Photo/Richard Drew, File) (Photo: The Associated Press)

One of the challenges facing intelligence analysts and law enforcement agencies is separating legitimate threats from useless chatter. As analysts combed through social media and websites before the Jan. 6 riot, threats often emerged from unknown sources that couldn’t be verified and whose seriousness was tough to gauge.

“When somebody sees a piece of information come in, along with thousands of other people’s information, they should have recognized its importance and made sure it was in the right place,” Kean said. “Obviously that didn’t happen.”

The Senate report from the Homeland Security and Rules committees said neither the Department of Homeland Security nor the FBI issued a threat assessment or joint intelligence bulletin specific to the Jan. 6 joint session of Congress to count Electoral College votes.

Then-Capitol Police Chief Steven Sund, who resigned the day after the riot, attributed the security failures to not having better intelligence from federal partners. He told a Senate hearing Feb. 23 that the intelligence provided by the department’s Intelligence and Interagency Coordination Division was “very similar to the previous assessments. It was just a little bit more detailed.”

Capitol police officers in riot gear push back demonstrators who try to break a door of the U.S. Capitol on Wednesday, Jan. 6, 2021, in Washington. (Photo: Jose Luis Magana, AP)

A DHS official told the Senate investigation during a briefing March 1 that he was “not aware of any known direct threat to the Capitol before Jan. 6,” despite many online posts mentioning violence. The Capitol Police intelligence division found no specific threats to the joint session of Congress, but that “the threat of disruptive actions or violence cannot be ruled out,” according to the Senate report.

In briefings, intelligence officials “highlighted the difficulty in discerning credible threats from online bravado and constitutionally protected speech,” according to the Senate report.

Jill Sanborn, assistant director of the FBI’s counterterrorism division, acknowledged to the Senate panels at a March hearing there was room for improving distribution of threat assessments. But she said it was difficult to determine an individual’s intent through the “volume” of rhetoric. She said the FBI met with some individuals to persuade them not to come to Washington, D.C.

The FBI Norfolk memo was one of several warnings U.S. Capitol Police received about the potential for violence Jan. 6. The memo was labeled a “Situational Information Report” (SIR) rather than a “threat assessment” or a formal “intelligence bulletin” that would have carried more weight.

“A SIR is a mechanism used by field offices ‘to share locally derived information’ that ‘is typically operational in nature and actionable by or relevant to only a limited audience in specific domains’ and does not meet the same criteria as an intelligence assessment,” according to the Senate report.

The FBI memo described a thread on social media threatening violence the next day.

“Be Ready to Fight,” the statement said. “Congress needs to hear glass breaking, doors being kicked in, and blood from their BLM and Pantifa slave soldiers being spilled. Get violent . . . stop calling this a march, or rally, or a protest. Go there ready for war.”

House Judiciary Chairman Jerry Nadler, D-N.Y., said warnings were coming in from around the country. He asked Wray on Thursday whether the FBI missed the evidence or failed to piece it together.

Wray said the Norfolk memo carried “raw unverified” information. But he said it was passed along to Capitol Police in three ways: through an email to the Joint Terrorism Task Force, through a verbal briefing with police and through an online portal that all police departments can access.

“We tried to make sure that we got that information to the right people,” Wray said. “I think the point of passing this information on we didn’t know what to make of it and that is why I emphasized that it was raw unverified information without a specific identity attached to it.”

The importance of analysts

A key recommendation from the 9/11 Commission was to improve salaries and status within the FBI for analysts, who are trying to connect the dots of intelligence gathered, but who were treated at a lower class than agents.

Hamilton also said strong oversight of intelligence agencies is necessary to keep an eye on how information and warnings are distributed. He said repeating warnings several times and to several agencies is important because one agency might not respond as aggressively as another.

“It requires all kinds of vigilance and scrutiny. You have to have backup systems to make up for incompetence,” Hamilton said. “People complain about the bureaucracy and all the rest, and sometimes with good reason, I guess. But you do have to have some duplication. If you don’t have it, you’re going to miss things.”

Hamilton said a key when he served on the Intelligence Committee in Congress was to notify multiple people and multiple agencies about a potential threat, to ensure it was reviewed and potentially acted upon.

“It may land on somebody’s desk who’s got 101 other things to do and they don’t give it the right priority that they should,” Hamilton said. “I kept hammering at it and I would follow up and make sure that they follow up. It just takes persistence, perseverance in getting the message across in a great big massive federal government.”

“You have to have people who are highly skilled, recognized and valued for what they do, and paid, so you can attract the best people to those jobs,” Kean said. “You’ve got to have the right people explaining that information, saying this absolutely should be followed up. There’s no question about it. For whatever reason it didn’t happen in this case.”

He added that consequences can be terrible.

“This was bad enough,” Kean said of the Capitol riot. “Let’s say somebody laid a bomb in the Capitol, it could have been worse.”