Michael R. Bloomberg will file paperwork on Friday afternoon to place himself on the Democratic presidential primary ballot in Alabama, advisers said, a first step toward competing for the party’s nomination to challenge President Trump next year.

Advisers to Mr. Bloomberg said that he had not made a final decision about whether to run for president, and that he planned to enter the Alabama primary as a preliminary step because the state has a filing deadline of Friday for candidates seeking to appear on the ballot next year.

Mr. Bloomberg, 77, has told associates that he intends to run, and if he backed away from the race now it would represent an abrupt reversal that would recall his past flirtations with a presidential bid. His advisers are preparing to meet several other upcoming filing deadlines, including in Arkansas and New Hampshire, where candidates must submit paperwork next week.

His consideration of a 2020 bid reflects the fluidity of a Democratic with no dominant front-runner, and a broader anxiety within the Democratic Party’s donor class and centrist establishment about whether the current leaders in the primary are capable of defeating Mr. Trump.

Party officials and donors have been talking privately for weeks about whether the one-time front-runner, former Vice President Joseph R. Biden Jr., will have the money to finance a multistate primary and whether Senators Elizabeth Warren and Bernie Sanders are too liberal to win the general election.

Mr. Bloomberg, the former New York City mayor who is one of the country’s richest men, has his own vulnerabilities, such as his support for stop-and-frisk policing and charter schools, and his criticism of Ms. Warren in particular over her positions on progressive taxation and trillions of dollars in new spending, which are popular on the left. But advisers to Mr. Bloomberg say he is also concerned that Mr. Biden may not be strong enough to win the nomination and that Ms. Warren or Mr. Sanders would be defeated next November.

Mr. Bloomberg has seriously explored running for president at least three times — in 2008 and 2016 as an independent, and earlier this year as a Democrat — but in every case he has opted against mounting a campaign. He has never before taken the step of actually filing paperwork to designate himself a candidate.

He initially decided last winter that he would not challenge Mr. Trump in 2020, in large part because he concluded he could not win the Democratic nomination with Mr. Biden in the race, as a formidable standard-bearer for the party’s moderate wing. But Mr. Biden’s struggles in recent months have given Mr. Bloomberg new optimism that there is space for him in the campaign.

There is considerable skepticism among the leading Democratic candidates about Mr. Bloomberg’s path forward in a 2020 primary. A centrist business mogul in his eighth decade, he would be seeking to lead a party focused on questions of economic inequality, cultural diversity and generational change. (The 2020 field already has several candidates in their 70s: Mr. Sanders is 78, Mr. Biden is 76, Mr. Trump is 73 and Ms. Warren is 70.) 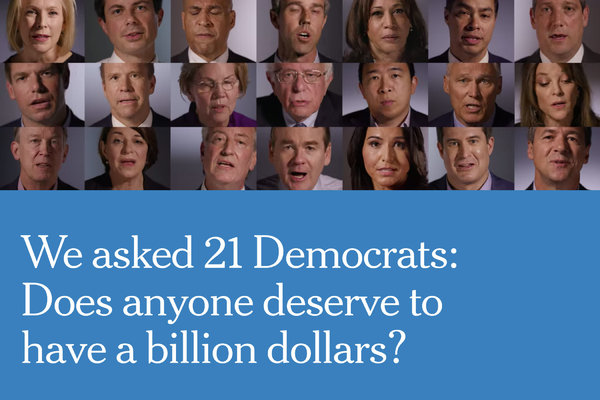 We asked the candidates whether anyone deserves to have a billion dollars.

The news of his revived interest in the race drew scorn from several leading Democrats, including Ms. Warren and Mr. Sanders, who branded him a billionaire seeking to buy the presidency to protect his own interests.

A political nomad with respect to party affiliation, Mr. Bloomberg was elected mayor three times on the Republican ticket before he registered as a Democrat during the midterm elections and spent more than $100 million to help the party take control of the House of Representatives.

He holds liberal views on a range of important issues — including gun control, climate change, immigration and abortion rights — but he is more conservative on issues related to the economy and law enforcement, and his record in government and business is ripe for intensive scrutiny.