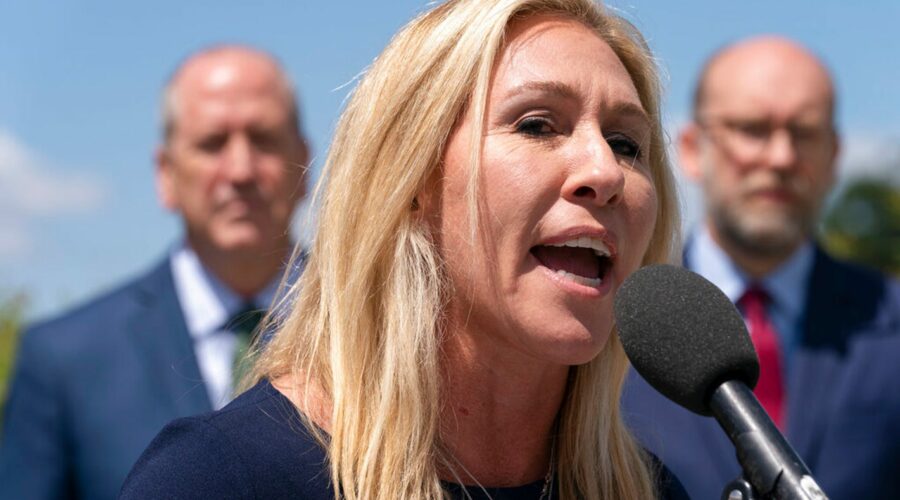 WASHINGTON — Rep. Marjorie Taylor Greene apologized Monday for affronting people with recent comments comparing the required wearing of safety masks in the House to the horrors of the Holocaust.

“I’m truly sorry for offending people with remarks about the Holocaust,” the Georgia Republican told reporters outside the Capitol, saying she had visited Washington’s U.S. Holocaust Memorial Museum earlier in the day. “There’s no comparison and there never ever will be.”

Greene’s comments were a rare expression of regret by the conservative agitator, a freshman whose career has included the embrace of violent and offensive conspiracy theories and angry confrontations with progressive colleagues.

Her apology came more than three weeks after appearing on a conservative podcast and comparing COVID-19 safety requirements adopted by Democrats controlling the House to “a time and history where people were told to wear a gold star.” She said they were “put in trains and taken to gas chambers in Nazi Germany. This is exactly the type of abuse that Nancy Pelosi is talking about.” Pelosi, D-Calif., is House speaker.

GOP leaders have often been reluctant to castigate Greene, a close ally of former President Donald Trump. After social media posts were unearthed in which Greene suggested support for executing some Democratic leaders, McCarthy and most Republicans stood by her when the House took the unusual step of stripping her of her committee assignments in February.

In May: What is going on with Rep. Marjorie Taylor Greene? Here is what happened this week

But as House members returned to the Capitol on Monday after a three-week break, Greene was contrite.

Anti-Semitism is true hate,” she said. “And I saw that today at the Holocaust Museum.”

In 2018, two years before her election to Congress, she speculated on Facebook that California wildfires may have been caused by “lasers or blue beams of light” controlled by a left-wing cabal tied to a powerful Jewish family.

On Monday, she told reporters that when she was 19, she visited the site of the Auschwitz concentration camp in what during World War II was Nazi-occupied Poland. “It isn’t like I learned about it today,” she said of the Holocaust, in which 6 million Jews and huge numbers of other people were killed. “I went today because I thought it was important,” she said, and wanted to talk about it as she apologized.

House leaders have recently said vaccinated people no longer must wear masks in the chamber.

Rep. Brad Schneider, D-Ill., said he would introduce a resolution in the House this week to censure Greene.

In addition, Republicans may try forcing a vote to punish Rep. Ilhan Omar. The Minnesota Democrat recently made remarks criticized by top House Democrats and Jewish lawmakers for seeming to compare the U.S. and Israel to Hamas and the Taliban. Omar said she didn’t mean to draw that parallel.