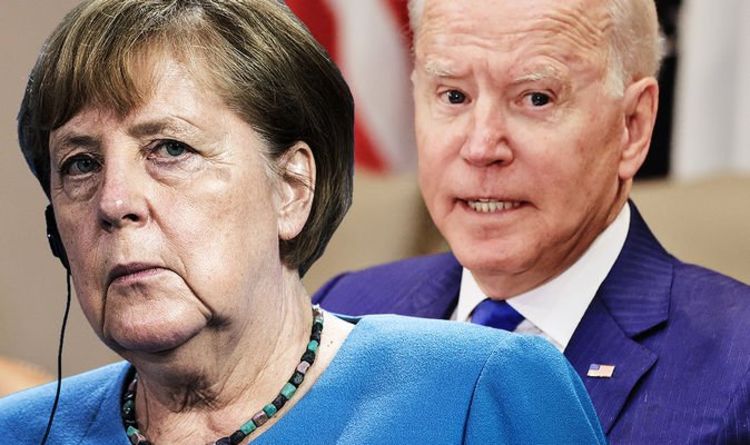 The US President is expected to press the outgoing German Chancellor on his geopolitical priorities as they look to heal their countries’ diplomatic relations that were strained by the Trump administration. Mrs Merkel is currently on a diplomatic farewell tour before she steps down after 16 years in charge of Germany later this year. Having worked with four US Presidents, she is keen to make her presence felt in Washington ahead of her departure from frontline politics.

The United States and Germany are key NATO allies but are at odds over a number of significant issues, including the Nord Stream 2 gas pipeline being built by Russia and Berlin’s relations with China.

The protracted battle over the pipeline being built under the Baltic Sea, which Washington fears will increase European reliance on Russian gas, is expected to continue.

Earlier this year, Mr Biden waived congressional sanctions on the Russian firm building the project and its German chief executive.

But this threat of sanctions could easily reemerge if there is no sign of a breakthrough for a consensus between Berlin and Washington.

Mr Biden and his predecessors have criticised the pipeline over concerns that the Russians will use it as a coercive tool against Ukraine.

Mrs Merkel earlier this week acknowledged that the two countries had still not reached a joint position.

She told reporters: “I don’t know whether the papers will be fully finalised, so to speak.

“I believe rather not. But these will be important talks for developing a common position.”

Since taking office, the Biden administration has made a big deal of challenging Beijing’s growing global influence.

This will put the US President at odds with Mrs Merkel, who has historically been keen to work with China and sees it as Germany’s most important trading partner.

MUST READ: Still not getting it! Frost fury as EU ‘drops’ 800 new Brexit rules

But despite their differences the two leaders will unveil the “Washington Declaration” that spells out a joint vision for cooperation on different policy challenges.

It will also include a commitment to human rights and a hat-tip to the results democratic leadership provides for the world.

They will also announce other initiatives, including a “futures forum” to bring together Americans and Germans from different sectors and a climate and energy partnership.

Angela Merkel discusses the delivery of vaccine doses to Ukraine

However, Mrs Merkel has previously noted that there will always be disputes between Germany and the United States.

Speaking after Mr Biden’s inauguration, she said: “Don’t think that from tomorrow there will only be harmony between us.

“There will also be arguments about how best to do things for our two countries.”

15/07/2021 Politics Comments Off on Listen up, Angela! Biden to grill Merkel over Germany’s relations with Russia and China
Markets