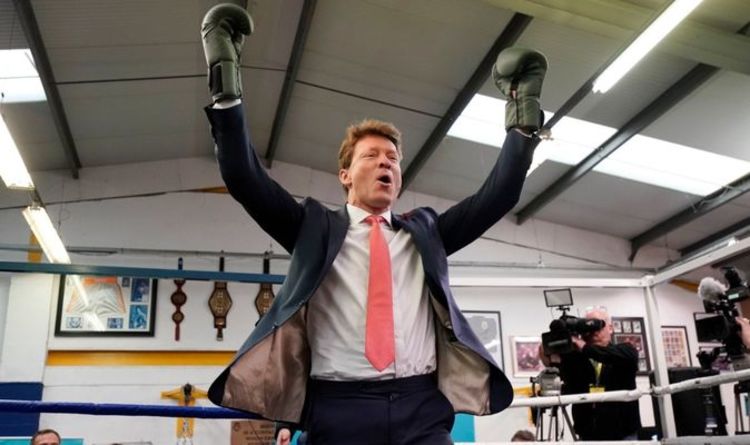 Mr Tice, 57, heaped the pressure on the Tory Party as he held Reform UK’s party conference just a stone’s throw away from Boris Johnson’s Conservatives. In his half-an-hour speech, the ex-businessman appeared to target disaffected Tory voters by offering a low-tax vision for Britain.

Speaking to supporters at the rebranded Brexit Party’s event, the ex-East of England MEP said: “This amazing nation of ours, and it’s all of ours, is being let down.

“We are a nation of lions and lionesses led literally by donkeys.”

Soon after the hall erupted with applause the former businessman added: “It is truly shocking how they [the Government] can say one thing one day and within a week you know that literally if you believe the opposite it is more likely to happen.

“They cannot be trusted and they are utterly incompetent.”

Tice’s attack on the Tories, or as he calls then the “Con-Socialists”, comes just weeks after Reform UK experienced a boost in the opinion polls following the Prime Minister’s manifesto-busting announcement to raise national insurance contributions to pay for social care and the NHS.

“The Con-socialists are now the party of high tax, high regulation, nanny state – and all of that leads to low growth,” the Leave.EU co-founder said.

“We did it to become a dynamic, bold, ambitious, low-tax, smartly regulated turbo of a nation that is the envy of the world.”

The Reform UK leader told GB News his appearance in Manchester had been “warmly received” by “disaffected” Conservatives.

Tice hopes his low-tax and low-regulation economic policies, which includes increasing the income tax threshold from £12500 to £20000, can outflank the Conservative Party on their otherwise natural terrain.

The 57-year-old said: “It’s a basic economic model that the Tories seem to have forgotten.”

“It is not net zero – it is literally net stupid,” he said.

As supporters of the Conservative Party arrived in Manchester, Reform UK’s bus roamed around the city.

Emblazoned on the side, the party wrote: “The Tory boiler ban will freeze your gran!”

Even though Mr Tice was once tipped as a potential Conservative candidate for the London mayoralty, he also claimed his party would not stand aside to protect vulnerable Tory MPs – which includes ardent Brexiteers such as Iain Duncan-Smith and Steve Baker.

Instead, and in contrast to Nigel Farage’s decision to only stand Brexit Party candidates in 275 non-Conservative seats in the 2019 general election, Mr Tice confirmed his party will field around 600 candidates when Brits next go to the polls.

“We are not standing down against Tories anywhere,” he said.