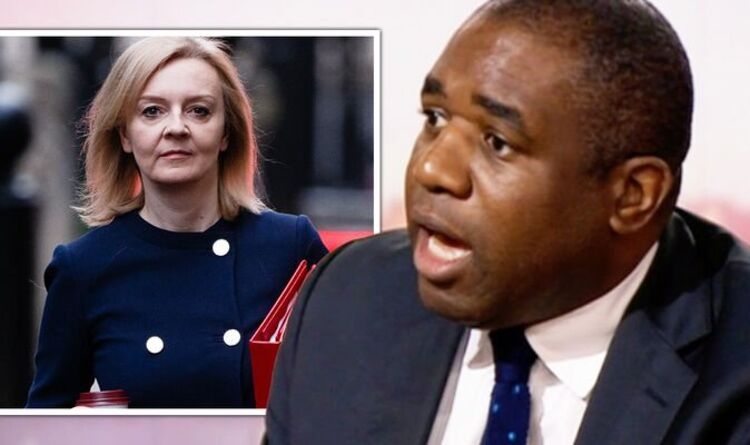 The Shadow Foreign Secretary warned the potential invasion could be the “biggest event of that kind” since World War Two. Around 100,000 Russian troops have massed around the Ukraine border, according to Western reports. The Labour MP for Tottenham described this as “deeply, deeply worrying”. He stressed a united response was necessary to keep the Kremlin at bay.

Mr Lammy told Politics Home’s The House magazine holding a united front “within our own democracies” was a priority, adding he was “grateful” for the opportunity to work with his Tory counterpart, Ms Truss, on the issue.

But the praise ended here, with Mr Lammy criticising the Foreign Secretary’s alleged refusal to work more closely with Brussels.

He said: “Being in a situation where one doesn’t even hear the words ‘EU‘ leave Government Ministers’ mouths when they’re in the Foreign Office is indicative of a sort of pettiness that doesn’t match the scale of the moment that we are in.”

The buildup of Russian troops has “reminded [the West] of the importance of a united front in Europe”, Mr Lammy stressed.

He added: “It’s really important for us to be united right across Europe on the issue of Russian aggression.”

The real situation, in Mr Lammy’s view, was far less positive than the optimum one.

There have been numerous “spats” with European leaders, including with French President Emmanuel Macron over Channel migrant crossings.

Politics Home reported Mr Lammy suggested these disputes “were a sign that the UK still had a poor relationship with many European countries post-Brexit”.

Labour’s frontbencher made an effort to insist his comments did not flow from a more general anti-Brexit sentiment.

His view of the problem appeared instead to be based on the Government’s handling of relations post-Brexit.

This related not just to the EU but to the UK’s other Western allies.

Mr Lammy told of a visit to the UK: “When I was in Washington, just before Christmas, I was worried at the amount of friends on the Hill that were raising with me the issue of the Northern Ireland Protocol.”

Joe Biden faced heavy criticism after US officials raised concerns over the post-Brexit agreement in a call with Whitehall over the weekend despite the pressing question of Russia’s next moves.

Following this, Express.co.uk readers described the President as “a danger to the US, Brexit Britain, Europe and The West in general”.