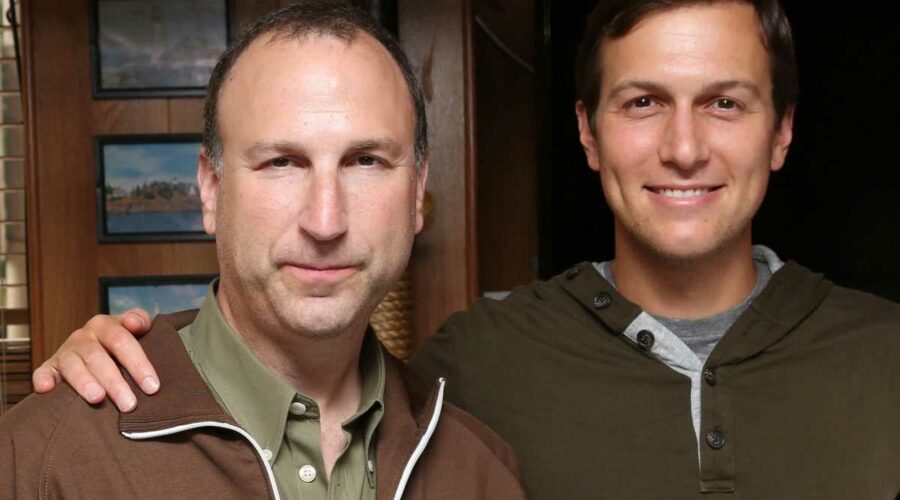 The Manhattan district attorney charged Ken Kurson, a friend and former associate of Jared Kushner, with cyberstalking his ex-wife on Wednesday, months after he received a pardon from then-President Donald Trump for alleged cybercrimes against other individuals.

Kurson, 52, is charged with eavesdropping and criminal trespass for allegedly illegally accessing his then-wife's communications in 2015 and 2016 while working as editor-in-chief of Observer Media Group, which at the time was owned by Kushner.

Vance's office is also continuing a criminal investigation of Trump's company, the Trump Organization. Vance charged the company and its chief financial officer Allen Weisselberg earlier this summer with a years-long scheme to avoid paying taxes on executive compensation. The company and the CFO have pleaded not guilty.

Kurson, who lives in New Jersey, was arraigned in Manhattan court Wednesday afternoon and released on his own recognizance. His lawyer Marc Mukasey did not respond to requests for comment.

Federal prosecutors last year hit Kurson with similar charges related to the alleged cyberstalking of three people. His first arrest came two years after he withdrew his name from consideration for a Trump administration appointment to the board of the National Endowment for the Humanities.

The 2020 criminal complaint in a footnote says that in addition to the three victims in that case, "FBI Special Agents have also obtained evidence revealing that Kurson engaged in a similar pattern of harassment in relation to his divorce proceedings against other individuals between approximately September 2015 and December 2015."

Before that federal case could go to trial, Trump pardoned Kurson in January on his way out of the White House. Kushner is Trump's son-in-law and served as a senior advisor in the White House.

Presidential pardons do not apply to state or local charges.

"We will not accept presidential pardons as get-out-of-jail-free cards for the well-connected in New York," Vance said in a statement Wednesday.

"Mr. Kurson launched a campaign of cybercrime, manipulation, and abuse from his perch at the New York Observer, and now the people of New York will hold him accountable," Vance said. The Observer is the newspaper that Kurson ran for Kushner.

Vance was previously thwarted in efforts to prosecute Trump's 2016 campaign chief Paul Manafort for financial crimes. A state judge ruled that case was barred by double jeopardy protections, since Manafort had been previously prosecuted by federal authorities for conduct that overlapped what Vance was alleging in a state criminal case.

But Vance's allegations against Kurson differ from details of allegations made last year by federal prosecutors. Vance's case also might avoid the double jeopardy ruling because Kurson's criminal case never went to trial.

The U.S. Attorney for the Eastern District of New York focused on actions including false complaints filed to two of the victims' employers and a false negative review about one of the victims posted on Yelp.

In 2018, The New York Times noted that the FBI had investigated allegations that Kurson harassed a doctor at Mount Sinai Hospital in Manhattan. The doctor was a long-time friend of Kurson and his then-wife, who were getting divorced at the time.

Kurson told The Times that year that the doctor was "a very good friend" and said, "I wish her nothing but the best."

"Of course when couples divorce, emotions run high. Thankfully everything worked out very well for my ex-wife and my kids, and I consider this chapter long closed from three years ago," Kurson told The Times.

When Kurson in 2020 was prosecuted in connection with the alleged harassment of the doctor and the other two people, his lawyer Mukasey told CNBC, "Ken Kurson is an honorable man, a loving dad, and a brilliant writer. This case is hardly the stuff of a federal criminal prosecution."
"He will get past it," Mukasey said at that time.

The Justice Department in July rejected a request by CNBC for the letter Kurson's ex-wife wrote asking for the federal criminal case to be dismissed against him.

The White House cited that letter at the time that Trump pardoned Kurson.

In that letter, Kurson's ex-wife allegedly wrote that "she never wanted this investigation or arrest and, 'repeatedly asked for the FBI to drop it … I hired a lawyer to protect me from being forced into yet another round of questioning. My disgust with this arrest and the subsequent articles is bottomless,' " the Trump White House claimed in its pardon statement.

"This investigation only began because Mr. Kurson was nominated to a role within the Trump Administration," Kurson's ex-wife purportedly wrote, according to the Trump White House.

In March 2018, the author Deborah Copaken wrote an article about Kurson in The Atlantic entitled "How to Lose Your Job from Sexual Harassment in 33 Easy Steps."

Copaken wrote that during a job interview at the Observer, Kurson commented about staring at her breasts.

Copaken also wrote that after she began writing articles for the newspaper, Kurson sent an email that said, "How come you never asked me out?"

The New York Times later in 2018 reported that Copaken was contacted by someone who told her about Kurson's alleged harassment of staffers at Mount Sinai Hospital.

Copaken told The Times that FBI agents interviewed her in June 2018 as part of a background investigation related to Kurson's would-be appointment to the National Endowment for the Humanities board.

When asked about Kurson's new criminal case, Copaken told CNBC on Wednesday, "I'm just learning about these new charges, so I don't know the details other than what I've been able to glean from early news reports, but when I read the news I instantly felt a sense of shoulder-dropping relief."

"Maybe justice will, in the end, prevail," Copaken said. "Maybe presidential pardons will have guardrails around them in the future. And maybe now I can finally remove that nice man who's a security expert from my speed dial."

While working as the editor of the Observer, Kurson advised then-presidential candidate Trump on a speech he gave to the American Israel Public Affairs Committee in 2016. He sat in the Trump family box at the Republican National Convention later that year.

Kurson more recently founded cryptocurrency and blockchain technology website Modern Consensus. He was on the board of cryptocurrency company Ripple as recently as last year.