The outgoing European Commission President grunted at reporters as they attempted to ask Boris Johnson questions on his Brexit achievement as soon as the Prime Minister finished his statement. As he did so, Boris Johnson joked: “Jean-Claude is the boss here!” The European chief than proceded to make his brief statement on the results of the negotiations. He said: “I have to say that I am happy about the deal but I am said about Brexit. Have a good time.”

In his statement, Boris Johnson said: “I agree very much with Jean-Claude about what he said about protecting the peace process on the island of Ireland and Northern Ireland.

“Of course, for us in the UK it means we can deliver a real Brexit that achieves our objectives.

“It means the UK leaves whole and entire on October 31 and it means that Northern Ireland and every part of the UK can take part in not just free trade deals, offering our tariffs, exporting our goods around the world, but it also means we can take, together as a single United Kingdom, decisions about our future – our laws, our borders, our money and how we want to run the UK.

“Those decisions will be taken in the UK by elected representatives of the people in the UK.” 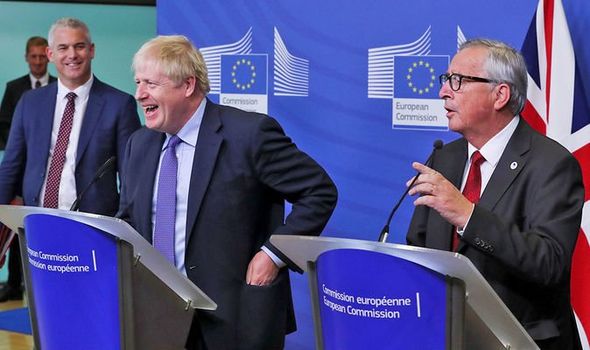 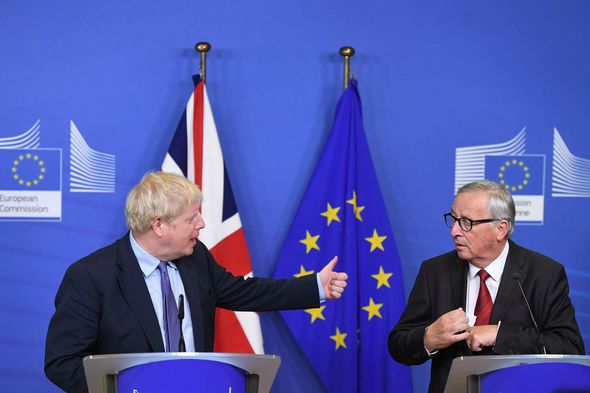 The Prime Minister is facing an uphill struggle to get the last-minute Brexit deal he struck with the EU through the Commons.

Following days of intense negotiations, the Prime Minister announced an agreement had been reached with Brussels as he headed to a summit of EU leaders on Thursday.

However, key Tory ally the DUP stood firm over its objections to the Government’s Brexit stance.

With the Commons expected to sit on Saturday to go over the deal, the first-weekend session of Parliament for 37 years, the DUP insisted it still could not yet back the Government’s EU withdrawal plans.

The stance of the DUP is important because the party wields influence over some hardline Tory Brexiteers and Mr Johnson is far short of a majority in Parliament.

Speaking on BBC Politics Live, former Conservative leader and leading Brexiteer Iain Duncan Smith admitted he was yet to read the full text agreed between Boris Johnson and Brussels.

But he warned that the DUP’s rejection of the latest Brexit deal would be a crucial factor in his judgement of the agreement.

He warned: “I’m reserving my position on this because I really want to read what’s in it. We were told by the Government throughout the discussions that certain concerns were being met within this agreement.

“And I just want to make sure that that’s the case.

“For many of my colleagues, that’s exactly the case. There are some issues.

“For example, if the DUP aren’t backing it, what’s the reason for not backing it?

“And if they’re not backing it, for example, on the issue of consent which is part of the Belfast Good Friday Agreement, you have to ask yourself a genuine question – which is a question I want to ask the Government.

“If the EU and Ireland’s position to defend all of their points all along the line has been we mustn’t damage the Good Friday Agreement, suddenly the concept of consent has been completely turned it appears.”