Democratic presidential contender Julián Castro challenged all the 2020 candidates for the nomination Wednesday to get behind his call to repeal the law that the Trump administration used to systematically separate families at the border last year.

The former secretary of housing and urban development was the first candidate to issue a comprehensive immigration plan when he did so in April, taking the trailblazing step of calling for the repeal of illegal entry, the federal criminal offense of crossing the border without authorization.

Castro contended that the federal government should instead rely on the civil immigration system, which enforces the penalties of detention and deportation, to regulate border crossings. Illegal entry was first criminalized in 1929, but it is only since the George W. Bush administration that criminal prosecutions of migrants have become a priority for the Justice Department. Since 2008, immigration prosecutions have taken up about half of the federal criminal docket ― a trend that has increased since President Donald Trump took office.

“Here’s why it’s important,” Castro said. “We see all this horrendous family separation. They use that law, Section 1325, to justify separating little children of their families. So I want to challenge every single candidate on this stage to support the repeal of Section 1325.” 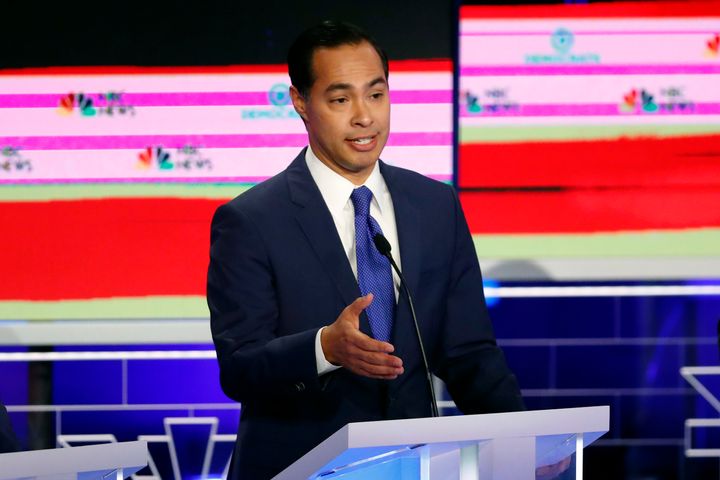 The law Castro referred to makes illegal entry into the United States a misdemeanor punishable by up to six months in prison. Under the family separation policy, which was universally denounced by Democrats, the Trump administration prosecuted migrant parents, routing them into jails while their then-unaccompanied children remained in the custody of immigration authorities.

Castro’s challenge touched off a scrimmage with former U.S. Rep. Beto O’Rourke, who recently told CNN that he thinks the law should remain on the books. In that interview, O’Rourke falsely asserted that the laws criminalizing illegal entry offered a “legal mechanism” to prosecute human smugglers and drug runners.

“I think it’s a mistake,” Castro said. “And if you truly want to change the system, then we gotta repeal that section. If not, then it might as well be the same policy.”

O’Rourke defended his position, implying that he would exempt asylum-seekers from prosecution ― a position he first staked out last year ― and affirming that he favored a comprehensive reform of immigration law.

“You’re looking at one small part of this,” O’Rourke said.

“A lot of the folks that are coming are not seeking asylum,” Castro shot back. “If you did your homework on this issue, you would know we should repeal this section.”

Sen. Cory Booker (N.J.) backed the proposal to repeal the criminalization of unauthorized border crossings, pointing out that we have a civil system that already enforces immigration law.

New York City Mayor Bill De Blasio injected himself into the debate, but did not state a position on illegal entry.

Sen. Amy Klobuchar (Minn.) was noncommittal, saying she’d look at Castro’s proposal. “But I do think you want to make sure you have provisions in place that would allow you to go after traffickers,” she said.

In fact, human smuggling is a totally different crime and wouldn’t be affected by Castro’s proposed reform.

Rep. Tim Ryan (Ohio) said he backed decriminalizing immigration, pointing out that it was already a civil offense. “That’s already established in the law,” Ryan said. “There’s no need to repeat it.”

Sen. Elizabeth Warren (Mass.), who did not get involved in the tussle, has already publicly backed repealing the law criminalizing illegal entry.

Trump tweeted the word “BORING!” while the debate over illegal entry began to play out. The president has made prosecuting illegal entry a centerpiece of his administration. His former attorney general, Jeff Sessions, instituted a policy called “zero tolerance,” in which the Justice Department prosecutes as many petty immigration cases as possible.

Last year, the Trump administration set a record for immigration prosecutions﻿ with about 94,000 ― taking up 57 percent of the federal criminal caseload.