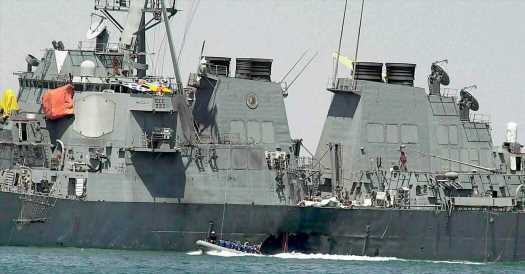 WASHINGTON — The military judge presiding in the death penalty case of a man accused of orchestrating the U.S.S. Cole bombing has agreed to consider information obtained during the man’s torture by C.I.A. interrogators to support an argument in pretrial proceedings at Guantánamo Bay.

Defense lawyers cast the decision as the first time that a military judge at the war court is publicly known to have agreed to consider information obtained through the C.I.A. torture of a prisoner, and on Thursday they asked a higher court to reverse it.

Col. Lanny J. Acosta Jr. of the Army ruled on May 18 that prosecutors may invoke such information to be used narrowly, not necessarily for the truth of it, before a jury begins hearing a case.

“No court has ever sanctioned the use of torture in this way,” the defense lawyers wrote in their 20-page filing that asked a Pentagon panel, the U.S. Court of Military Commission Review, to intervene in the case against Abd al-Rahim al-Nashiri, a Saudi prisoner awaiting trial at Guantánamo Bay. “No court has ever approved the government’s use of torture as a tool in discovery litigation” or as “a legitimate means of facilitating a court’s interlocutory fact-finding.”

Mr. Nashiri, 56, is accused of plotting Al Qaeda’s suicide bombing of the U.S.S. Cole off Yemen in October 2000, which killed 17 sailors, and attacking an oil tanker, the Limburg, two years later, in which a crew member was killed. He has been held since 2002, starting with four years of C.I.A. custody.

An earlier timetable that envisioned starting his trial in February 2022 is in doubt because the coronavirus pandemic has paralyzed progress in the legal proceedings at Guantánamo. The next hearings are scheduled for September.

The current issue arose out of a classified court filing in March by prosecutors trying to limit a line of inquiry by defense lawyers about a drone in Syria in 2015 that killed another suspected Qaeda bomber, Mohsen al-Fadhli. Mr. Nashiri’s lawyers have sought information about several drone attacks as they pursue a possible defense argument that more senior or complicit plotters in attacks on Persian Gulf targets have already been killed by the United States.

To block the inquiry, prosecutors invoked something classified that Mr. Nashiri told C.I.A. interrogators, according to a defense filing, “in the first weeks of his captivity when he was actively and brutally tortured by the Central Intelligence Agency.” It was a major departure from the prosecution practice of building their cases around interrogations carried out by F.B.I. agents in so-called “clean teams” at Guantánamo in 2007.

Defense lawyers asked the judge to reject the filing. They said Mr. Nashiri divulged the information at a time when U.S. agents were using a broomstick in a particularly cruel way while questioning him, which alarmed observers and caused the captive to cry out.

Colonel Acosta ruled that the prosecutors were permitted to use the information for a limited exception “but only to provide context on a discovery issue in dispute.” When Congress created the military commissions, he said, it prohibited the jury, a panel of military officers, from receiving evidence obtained by torture, cruel, inhuman or degrading treatment.

In his ruling, however, Colonel Acosta said there were occasions when a judge could consider such information while recognizing that “statements obtained through torture are necessarily of highly suspect reliability.” He also warned that lawyers should proceed “with caution” if they want to rely on such statements to support a factual assertion in the proceedings.

David Luban, a professor of law at Georgetown University, analyzed the decision and said he found it troubling because “torture evidence sneaks in through the back door.”

Colonel Acosta has emerged as a bit of a maverick in the military commissions. In November 2019, while reconsidering an earlier judge’s rulings, he rejected years of materials provided by prosecutors to defense lawyers. He found that the national security censors over-redacted some information to avoid embarrassing the U.S. government and to the disadvantage of defense lawyers.

Defense lawyers have had little success in obtaining pretrial decisions in their favor by the Court of Military Commissions Review. But a filing there is a necessary precursor to challenging the military judges at the civilian U.S. Court of Appeals for that District of Columbia Circuit.