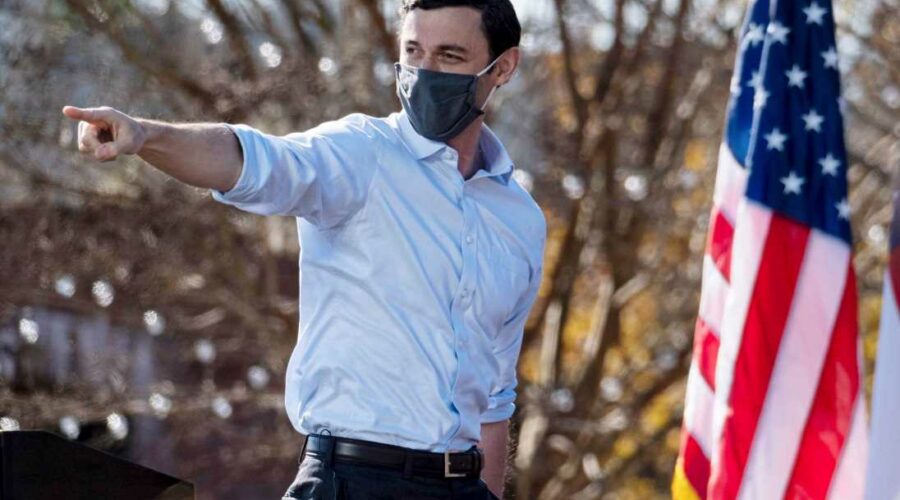 Jon Ossoff is the projected winner of Georgia’s U.S. Senate runoff election, according to NBC and ABC, defeating GOP Sen. David Perdue and delivering Democrats control of the upper chamber, clearing a path for them to carry out President-elect Joe Biden’s agenda.

Georgia has been the political focus of the country after candidates in both the state’s Senate races failed to secure a majority of the votes in November, triggering runoff elections in January. Democrat Raphael Warnock, the senior pastor at Ebenezer Baptist Church in Atlanta, won his race against Sen. Kelly Loeffler (R) in the other Senate contest.

For weeks, the fate of the U.S. Senate rested on these two races. If Democrats won both, they would control the chamber. (It would be split 50-50, with Vice President-elect Kamala Harris as the tiebreaker.) If Republicans held on to just one seat, Mitch McConnell (Ky.) would remain the majority leader.

“Georgia, thank you so much for the confidence that you’ve placed in me,” Ossoff said during his victory speech Wednesday, adding, “I will look forward to serving you in the United States Senate with integrity, with humility, with honor and getting things done for the people of Georgia.”

He lost, but the race became a proxy fight over Donald Trump and attracted unprecedented national attention and spending, energizing Democrats who wanted to stand up against the president.

Perdue, 71, was first elected in 2014 after a long career as a corporate consultant and then CEO of Dollar General. He has acknowledged that outsourcing jobs overseas was part of the work he did.

In the runoffs, Perdue and Loeffler tied themselves closely to Trump, even though it sometimes put them at odds with the Republican political establishment in their own state. They backed Trump’s efforts to discredit and overturn the presidential election results in Georgia, even as the state’s top GOP officials ― including the governor and the secretary of state ― stood by them.

The strategy was risky, considering that Trump lost the state. But they gambled that they needed to energize and turn out Trump’s base in order to win ― even at the risk of energizing Democrats even more or alienating more moderate Republicans and independents.

The two Senate races attracted hundreds of millions of dollars in spending on political ads. Ossoff and Warnock shattered fundraising records ― pulling in more than $100 million each in the last two months ― and significantly outraised their GOP opponents. Yet eight days before the election, the campaign managers for the Ossoff and Warnock campaigns wrote a joint memo “sounding the alarm” about the need for more funds. While Democrats were largely relying on individual donations and small-dollar contributions, they were being outspent by GOP outside groups.

Republicans focused their attention on Warnock, trying to portray the pastor of Martin Luther King Jr.’s church as a radical and “heretic.” Ossoff, they argued, was under the sway of the far left. Perdue repeatedly tried to tie Ossoff to the Chinese government and the Communist Party ― while erasing his own experience in Asia.

The GOP also claimed that victory for the two Democrats would mean the “collapse of the United States of America.” (In reality, Democrats would likely be able to implement only the most incremental and moderate elements of their agenda with such a slim margin.)

Republicans have traditionally held turnout advantages in runoffs, but Trump’s allies actually encouraged GOP voters to stay home and not vote as part of their strategy of questioning the integrity of the election process.

More than 2 million people had already voted early a week out from the election, pointing to the intense interest and attention on the race. By contrast, in the last Senate runoff in Georgia, which was after the 2008 election, just 2.1 million voters turned out in total.

Ossoff will be the youngest senator in 40 years. In a recent interview with The New York Times, he defended his age and pointed to young progressive activists throughout history, including the late Rep. John Lewis (D-Ga.), who was a supporter.

“John Lewis was 23, 24 years old when he was leading the Student Nonviolent Coordinating Committee,” Ossoff said. “I was so inspired by the fact that young people in that movement had made a difference. And I don’t think that young people should simply wait their turn but should engage fully in the life of our communities, and our country, and our world, and try to make a difference.”