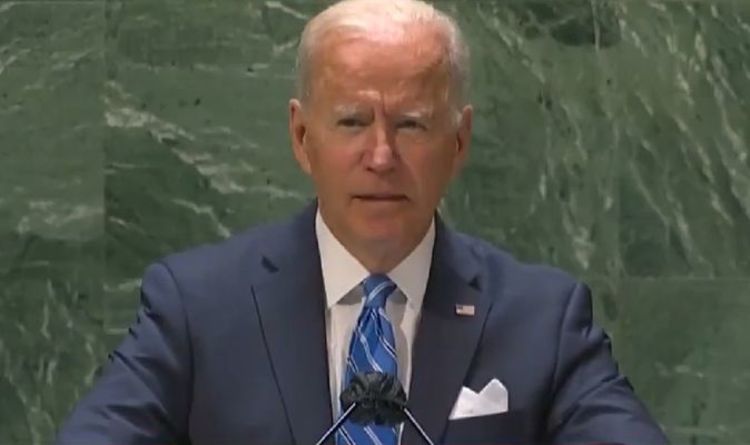 Biden ‘undermined’ alliance UK and US depend on says Armstrong

President Joe Biden’s decision to abandoned Afghanistan has shattered Britain’s freedom and flexibility to build alliances to counter the rise of China, Sam Amstrong as revealed to Express.co.uk. Mr Armstrong has warned that the US decision to pull out troops has weakened globally trust in western powers as reliable allies, meaning the UK’s “freedom and flexibility to be fickle to be perfidious has been eviscerated.”

Mr Armstrong told Express.co.uk: “Every day that goes by China is growing more and more into the superpower role that it desires, and in a sense through its economic and military might deserves.

“China is going to take up a place in which it is the world’s second or perhaps even greatest power.

“Now all that calls for a response, the response it calls for is for us to be reliable, dependant assured to our allies who need and call on us.

“Otherwise you can slightly forgive them for finding themselves falling into the hands of our adversaries all of whom are saying ‘look don’t go with the west they are requiring you to do this, this, and this you don’t want to do.

JUST IN: China’s chilling warning of ‘war provocation’ against Taiwan and Japan

“‘Come in with us instead we won’t ask you do any of that just stick by with us.'”

“‘And unlike them, our leaders are going to be around forever and the promises and insurances they make you can count on,'” he continued.

“So for President Biden to turn around and say we are going to leave Afghanistan, we are going to abandon them despite the promises we made the Afghan people is really undermining to the alliances that both the UK and the US depend on to see our values and economic prosperity carried around the world.

“So with China on the rise our freedom and flexibility to be fickle to be perfidious has been eviscerated.

Mr Armstrong added: “‘Come in with us instead we won’t ask you do any of that just stick by with us.'”

“Our only choice is to be reliable, trustworthy, and a good friend to those who count on us.”

Mr Armstrong also argued the UK Government approach to tackling China “makes no sense” as despite standing up to Xi Jinping on the international stage with moves such as AUKUS, the British state is to willing to “hand the keys over” to Chinese backed firms operation in sensitive areas of the UK economy.”

He told Express.co.uk: “The UK Government’s position on China makes no sense.

“On one level they recognised that they are engaged in locking up over a million Muslim people for no other reason than their religion.

“For tearing up treaties, for breaking the basic norms of international navigation at sea, and for jeopardizing the future prosperity of our allies.

“So much so that we are prepared to literally open our deepest darkest secrets to our allies in Australia to help them build nuclear submarines for themselves.”

He continued: “Yet all the while we are welcoming in Chinese companies and handing them the keys to in essence be able to lock and shut us off.

“This strategic incoherency worries a lot of people myself included.