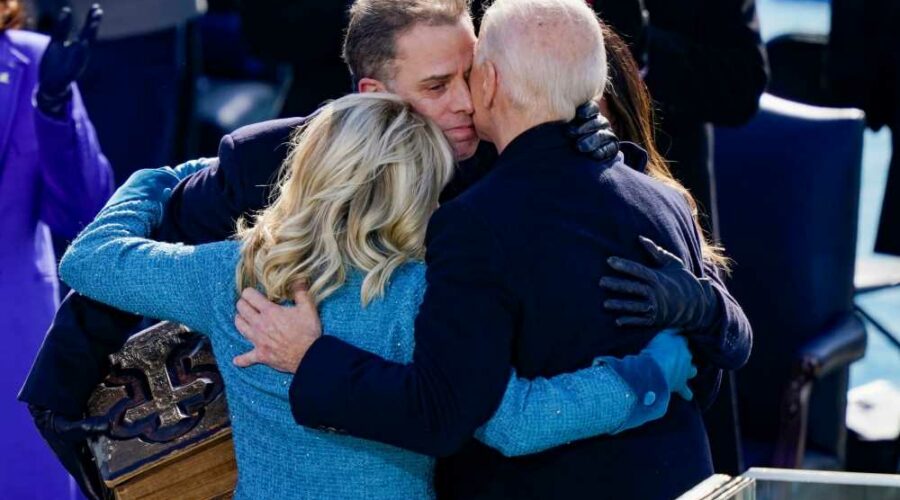 Hunter Biden writes in an exceedingly candid new memoir that while dad Joe Biden was vice president, he showed up at Hunter's apartment to talk to him about his alcohol addiction.

"I know you're not fine, Hunter. You need help," President Biden's younger son, now 51, remembers his father, 78, telling him during the visit, according to details of Beautiful Things reported by The New York Times.

The revelation is one of many harrowing accounts from Hunter's forthcoming book, which hones in on some of the tumultuous details of his life, including his romantic relationship with his late brother's widow and his alcohol and drug addiction.

The New York Times obtained an advance of the book, which is due out April 6.

The newspaper on Tuesday reported some of the book's key moments, including Hunter's extensive descriptions of his seesawing addiction — with periods of sobriety broken by near-total derailment.

"I've been so desperate for a drink that I couldn't make the one-block walk between a liquor store and my apartment without uncapping the bottle to take a swig," he writes. At another point, the Times reports, Hunter writes about sifting through a homeless encampment in Los Angeles while looking to score drugs before he had a gun pointed in his face.

Elsewhere in the book, he recounts his former crack addiction and how he invited his dealer to live with him at his Washington, D.C., apartment, before his father — then the vice president — came knocking at the door to help.

"He never let me forget that all was not lost," Hunter writes, according to the Times. "He never abandoned me, never shunned me, never judged me, no matter how bad things got — and believe me, from there they would get much, much worse."

Despite playing no formal role in the Biden campaign or as his dad's adviser, Hunter emerged from the 2020 presidential election as perhaps the most controversial and most targeted member of his family.

Conservatives relentlessly focused on his past business dealings, which had raised ethical worries despite no evidence of wrongdoing. Many Republicans also pilloried Hunter for his personal problems, including his drug abuse and string of eyebrow-raising romances.

Hunter covers much of his ups and downs in his memoir — though the section on his work in Ukraine "reads like a research paper compiled by a reluctant student," as the Times describes it.

Donald Trump routinely attacked Hunter throughout the 2020 campaign, specifically focusing on his history of addiction and his past business work. (Trump's fixation on trying to find dirt on the Bidens and Ukraine was also at the heart of his first impeachment for abuse of power.)

For his part, Hunter writes in his book that Trump, 74, is "a vile man with a vile mission," The Guardian reports.

President Biden, however, made it a point to hold his relationship with his son up as an example for how families should handle addiction with concern and care. "I'm proud of him," he said during one debate, describing how Hunter "had a drug problem" and overcame it.

Last month, Biden told CBS News that reading his son's memoir made him feel like his "boy is back."

"The honesty with which he stepped forward and talked about the problem and the hope that it gave me hope reading it," the president said.

Elsewhere in Hunter's book, he shares personal details about his mother and baby sister's deaths in their 1972 car crash as well as big brother Beau's death from brain cancer in 2015 and his relationship with ex-wife Kathleen and Beau's widow, Hallie. Hunter's position on the board of Burisma Holdings, a Ukrainian energy company, came under scrutiny because of his father's vice presidency and Hunter's lack of qualifications as a lawyer and former lobbyist.

According to the Times, he maintains in his book that "I did nothing unethical, and have never been charged with wrongdoing," but notes how the job "landed me in the heart of the decade's biggest political fable," becoming the centerpiece in Trump's first impeachment.

According to the Times, Hunter writes in detail about the last images he can remember of late mother Neilia and sister Naomi, who were in the front seat when a tractor-trailer collided with the family's car at an intersection in a Christmastime crash. After Beau died, Hunter developed a relationship with his widow, which he also describes in solemn detail, according to the Times.

"Our relationship began as a mutually desperate grasping for the love we had both lost, and its dissolution only deepened that tragedy," Hunter writes. "It made the obvious clear: What was gone was gone permanently. There was no putting Humpty Dumpty back together again."

After he and Hallie split, Hunter married South African filmmaker Melissa Cohen in a whirlwind romance in 2019 that saw them tie the knot days after meeting.

In the book, Hunter credits Cohen with helping break his crack addiction, according to the Times.

Hunter recalls telling Cohen he was a crack addict, before she said: "Not anymore. You're finished with that."

The couple now have a baby son together named Beau.

If you or someone you know is struggling with addiction, please contact the SAMHSA substance abuse helpline at 1-800-662-HELP.

31/03/2021 Politics Comments Off on Joe Biden Confronted Son Hunter About Addiction at His Apartment During Vice Presidency: ‘You Need Help’
Markets