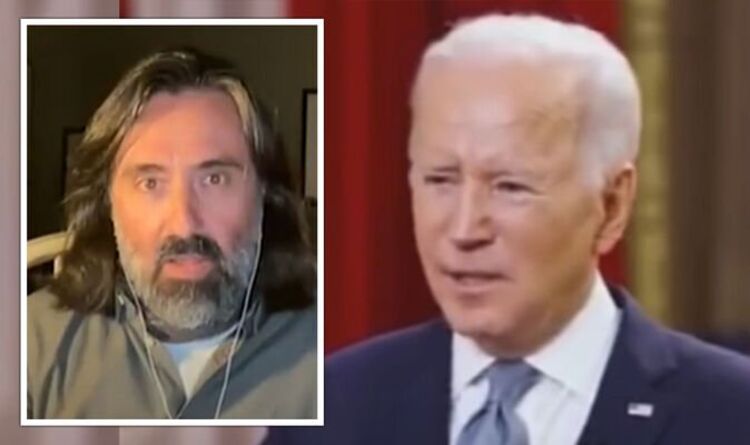 Mr Oliver explained to GB News host Dan Wootton that Joe Bidens latest blunder has US officials racing once again to clear up his mess. The TV presenter speculated the US President was likely using an autocue or adlibbing. Mr Biden has been accused by many political commentators of backing President Putin into a corner despite Putin threatening nuclear warfare. Mr Oliver accused Mr Biden of continuing to provoke President Putin.

Mr Oliver said: “Off an autocue, but if he is adlibbing it’s time for that kind of, off-piste free form talking.

“And that had to be walked back, and then he made his comments about 82nd airborne, he said to them when you’re their, or words to that effect or you will see.

“And they had to walk that back, there were no intentions to put US soldiers on the ground.

JUST IN: Boy found in hunt for student who vanished after night out with friends

Mr Oliver added: “And now this thing about saying Putin must not be allowed to continue to rule.

“Many commentators across the piste have been saying, that with a man like Putin, you do not back him into a corner.

“Because Russia has got more nuclear weapons than any other State.

“And it seems to be generally thought that if it becomes existential for him, which is to say if he thinks either Russia or himself is physically threatened then he would be likely to take the nuclear option.

Mr Oliver said: “That he would go there, and so that is not an individual to be provoked.

“Especially if it’s happening because an old man, and an elderly man at the end of his cognitive strength is just carelessly stepping into a potential minefield.”

Mr Biden said during a speech in Poland last week  “For God’s sake, this man cannot remain in power” when discussing Putin.

French President Macron expressed how important it was not to provoke Putin by Biden calling for regime change in Russia, which will most likely be taken as a threat.

“I think we must do everything to avoid the situation getting out of hand.

“I wouldn’t use these kinds of words because I’m still in talks with President Putin.”

Many Western political commentators have been speculating about Mr Biden’s cognitive health, as they believe his actions show it’s declined.

Mr Blinken said: “With regard to the President’s incredibly powerful speech yesterday, I think the President, the White House, made the point last night that quite simply President Putin cannot be empowered to wage war or engage in aggression against Ukraine or anyone else.

“As you know, and as you’ve heard us say repeatedly, we do not have a strategy for regime change in Russia or anywhere else for that matter.”