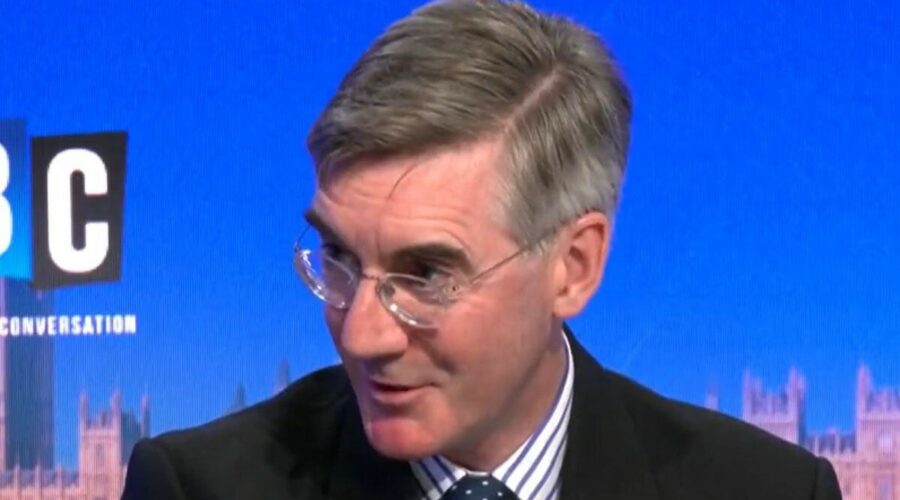 Mr Rees-Mogg sat down with Andrew Marr to discuss the backlash against the Prime Minister for his behaviour. Mr Rees-Mogg accused Mr Marr of speculating about the lockdown parties, despite ongoing investigations and the police issuing fines to senior Tories who had been found at fault. The pair then went on to talk about Mr Harper who is one of many MPs who has asked Mr Johnson to step down. Mr Rees-Mogg claimed that Mr Harper was enjoing asking the Prime Minister to leave, as much as it ‘pained’ him to do so.

Mr Marr told LBC: “If looking at those other parties which were clearly parties, I say again with Abba music blaring and beers and drink available…”

“Your whole thesis this evening has been speculation, you speculating about the IMF and you speculated about parties we don’t know about.

“So let’s just deal with facts.”

Mr Marr said: “We do know about the parties because they’ve been widely reported and we don’t know what the police…”

Mr Rees-Mogg said: “They’re being investigated, we don’t know what the police are going to say.”

Mr Marr added: “All I’m… My viewpoint is that you couldn’t as it were sustain that defence if that was the case.”

Mr Rees-Mogg added: “Not deliberately mislead, we all make mistakes that is a different matter.”

Mr Marr added: “Big moment for a former chief whip Mark Harper to call for him to go isn’t it?”

Mr Rees Mogg said: “Not particularly, no Mark has been gearing up for that for some time, as you’ve noticed.

“You just have to watch his Commons performances, it was quite funny when he said how much it pained him when he was clearly enjoying the moment thoroughly.”

Mark Harper ex chief whip revealed that he had submitted a letter of no confidence to the chairman of the Conservative 1922 Committee Sir Graham Brad.

Mr Harper said: “The clearest example of the toxic culture in 10 Downing Street that the Prime Minister fostered was the partying by senior political appointees hours before Her Majesty The Queen laid to rest her beloved husband of 73 years during a period of national mourning.

“It is especially at times of international crisis and tensions that our country needs a Prime Minister who commands trust, obeys the law and exemplifies the very values that we are trying to defend.”

Addressing MPs in Parliament following the short Easter recess, Boris Johnson said: “I take this opportunity on the first available sitting day to repeat my wholehearted apology to the House (of Commons).

“As soon as I received the notice, I acknowledged the hurt and the anger, and I said that people had a right to expect better of their Prime Minister.

“It did not occur to me then, or subsequently, that a gathering in the Cabinet Room just before a vital meeting on COVID strategy could amount to a breach of the rules. I repeat that was my mistake, and I apologise for it, unreservedly.”