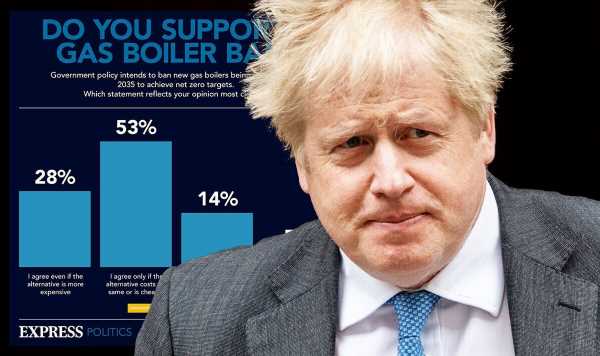 The Techne UK poll for Express.co.uk has shown that 53 percent will only support ending traditional gas boilers if they do not need to pay more for the alternative. Another 14 percent oppose the ban altogether while a mere 28 percent support it whatever the cost. The results come amid fears carbon neutral heat pumps for houses will cost between £15,000 and £22,000 to install, crippling people in the cost of living crisis.

Under current plans, new homes will not be allowed gas central heating from 2025 and will have to use heat pumps or other alternatives.

From 2035, the Government plans to ban all new gas boilers altogether meaning that any replacement from then will have to be environmentally friendly.

Along with electric cars, which currently cost significantly more than petrol and diesel vehicles, there is a significant concern that people will be unable to afford the so called Green alternatives.

The findings of the poll have boosted calls for a referendum on Boris Johnson’s Net Zero plans which he agreed at the COP26 summit in Glasgow and at G7 meeting in Cornwall both last year.

Reform Party leader Richard Tice, who has led demands for a referendum on the Net Zero by 2050 goal, said: “There is no prospect of alternatives to gas boilers being cost neutral or actually costing less.

“That means this poll confirms that around seven in 10 people oppose these plans and only just over one in four support them.”

He went on: “It shows that Boris Johnson and the Government are completely out of touch with the views and concerns on this issue with ordinary people across Britain.

“With the cost of living crisis people are really despairing on how they can afford to pay the bills and this government is just adding to them with these green measures.

“It is all unnecessary and totally irresponsible.”

But Energy Secretary Kwasi Kwarteng has insisted the cost of new green technology will eventually be less than traditional gas boilers.

A source close to the minister said: “Anyone who chooses to install an electric heat pump can claim a grant worth up to £5,000 grant and benefit from 0 percent VAT.

“We are working with industry to further bring down the cost of heat pumps by up to half by 2025, and reaching parity with boilers by 2030 as the technology develops, making them ultimately the most affordable and obvious choice for consumers.

“From 2035, all new heating systems installed in people’s homes will either be electric heat pumps, heat networks for potentially hydrogen (recognising there isn’t a silver bullet replacement for gas boilers in every home in every geography).”

Concerningly for the Government, opposition to stripping out gas boilers is strongest among young voters with 18- to 24-year-olds opposing the plan unless alternatives do not cost extra.

Meanwhile opposition is also strongest among Labour supporters at 56 percent not willing to pay more.

Even almost four in 10 (38 percent) Green Party voters want to keep gas boilers if they have to fork out extra for alternatives.