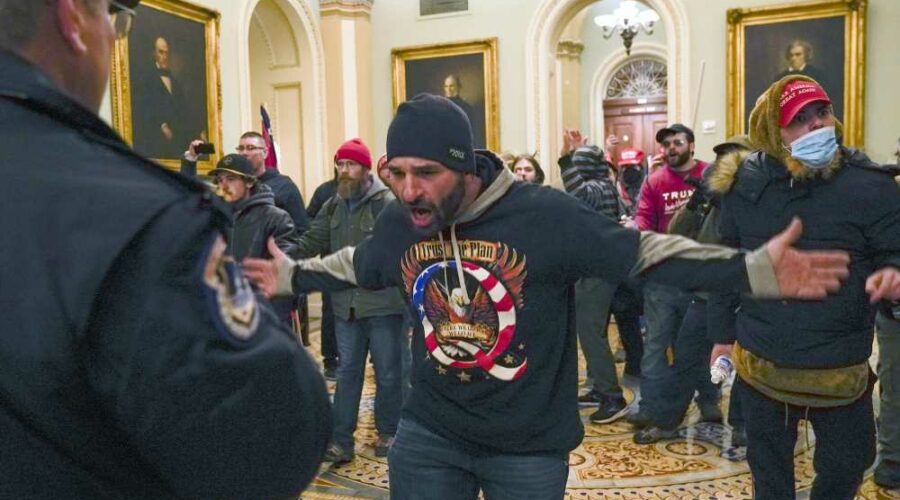 Even with the threat of a return to jail, one QAnon supporter could not escape the lure of MyPillow guy Mike Lindell and his conspiracy theories.

On Thursday, QAnon supporter Doug Jensen was sent back to prison for violating the terms of his release when he went online to watch false election fraud conspiracy videos. Jensen was infamously captured on video chasing police officer Eugene Goodman near the Senate chamber during the January 6th insurrection. He was arrested and charged days later.

In a pre-trial filing, Jensen said that he came “full circle” in his beliefs and felt “deceived” by QAnon conspiracy theories, which he said were a “pack of lies.” District Judge Timothy Kelly released Jensen to home incarceration in July under strict conditions, including one provision that prohibited him from accessing the internet at all, so he could not fall deeper into online conspiracies.

Chasteness, Soda Pop, and Show Tunes: The Lost Story of the Young Americans and the Choircore Movement

But when court officers paid an unannounced visit to his Iowa home 30 days after he was released, they discovered Jensen was “alone” in his garage and streaming “news from Rumble,” a right-wing news outlet, on a cell phone. When he was caught, Jensen first said the phone belonged to his daughter, but his daughter told an officer she had gotten a new phone weeks earlier. Then he claimed that his wife left the news on for him when she went to work. Finally, he admitted to a court officer that he had “spent two days watching Mike Lindell’s Cyber Symposium regarding the recount of the presidential election.”

Prosecutors argued in court on Thursday that because Jensen violated the terms of his bond, he should be sent back to jail. “Two weeks after swearing to this court, he would obey its order, he was back to [his] habits,” Assistant United States Attorney Hava Mirell said. “His violations were swift and blatant.”

Defense lawyer Christopher Davis, said that an internet ban was “a bit Orwellian” and likened Jensen’s obsession to a drug relapse or “compulsion.” He said that if the judge allowed Jensen to return home, he would make it “crystal clear” to his client that his wife was not allowed to turn his phone on for him.

But Mirell argued on behalf of the prosecution that Jensen “does not deserve a second chance.” “This is not equivalent to a drug relapse,” she said. “There is no chemical dependency here.”

Since it was clear Jensen had not truly disavowed his QAnon beliefs and because was caught violating the terms of his bond the first time officers paid a visit to his home, the judge sided with the prosecution.

“I ordered the various conditions of release in this case because of the role that the internet conspiracy theories appeared to have played in Mr. Jensen’s alleged conduct,” Kelly said. “One of the reasons… I decided to let him out with those conditions was in part based on his representations that he understood that they were a ‘pack of lies’ and that he had turned the corner.”

Judging by Jensen’s behavior, Kelly said Jensen had not yet encountered the “wake-up call that he needs” and concluded that “there are no conditions that will assure Mr. Jensen will not pose a danger to the safety of the community,” ordering him back to jail.