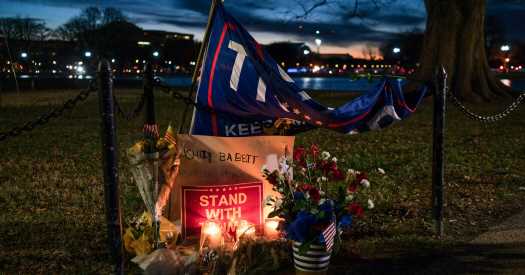 WASHINGTON — A preliminary investigation has not found enough evidence to criminally charge the U.S. Capitol Police lieutenant who killed Ashli Babbitt, a pro-Trump rioter who stormed the Capitol last month, according to law enforcement officials familiar with the inquiry.

But the officials warned on Monday that the investigation by the city’s police force, the Metropolitan Police Department, was not complete and that no recommendation had been made to the U.S. attorney’s office in Washington, which would prosecute the officer.

Ms. Babbitt, 35, participated in one of a handful of mob attacks that nearly reached members of Congress during the hourslong siege of the Capitol on Jan. 6. She and fellow rioters hammered at the doors separating them from the House chamber as lawmakers evacuated.

As Ms. Babbitt tried to jump a barrier and enter the speaker’s lobby through a broken window, the Capitol Police lieutenant shot and killed her. While officials have not provided a full accounting of Ms. Babbitt’s fatal encounter, it was caught on video and widely shared on social media.

But footage, combined with witness accounts, seems to show that the lieutenant, who has not been named, was left alone to confront a mob. The lieutenant has been on administrative leave pending the results of the investigation into the shooting and was interviewed by investigators last week.

The preliminary findings were reported earlier by The Wall Street Journal.

Dustin Sternbeck, a spokesman for the Metropolitan Police Department, said “it would be premature” for the department “to make any comment that any conclusion had been reached.” The Justice Department and the Capitol Police said their agencies did not comment on active investigations.

Civil rights prosecutors in the U.S. attorney’s office opened a formal, federal excessive force investigation into Ms. Babbitt’s death in the days after the Capitol riot, a “routine, standard procedure whenever an officer deploys lethal force,” a Justice Department spokeswoman said when the investigation was announced.

Lethal force is deemed legally justified if an officer has an “objectively reasonable” fear of serious harm to themselves or others. Two people familiar with the lieutenant’s account suggested that he would argue that he had acted to protect lawmakers from harm. Five people died during the assault on the Capitol and in the immediate aftermath.

In death, Ms. Babbitt has become a martyrlike figure for far-right extremist groups that have long supported former President Donald J. Trump, many of whom came to the Capitol to prevent the official certification of President Biden’s Electoral College victory, including white nationalists and militia members. She could continue to serve as a rallying cry for Mr. Trump’s supporters if the officer is not charged.

Ms. Babbitt, who served in the Air Force and the Air National Guard for more than a dozen years, was seen on video in the moments before her death wearing a Trump flag like a cape.

Her social media accounts were filled with messages of support for Mr. Trump, as well as QAnon conspiracy theories.

“Nothing will stop us,” she said on Twitter the day before she and supporters of Mr. Trump attacked Congress. “They can try and try and try but the storm is here and it is descending upon DC in less than 24 hours …. dark to light!”