The powerful Culinary Workers Union Local 226 announced on Thursday that it would not be endorsing a Democratic presidential candidate ahead of the Nevada caucuses on Feb. 22.

The union’s three top policy goals are making sure that “one job is enough” for every worker to afford their livelihood; protection of the union’s “choices” to maintain its own health care plan; and immigration reform that provides a pathway to citizenship for an estimated 11 million undocumented immigrants living in the United States.

The nonendorsement is sure to be a source of relief for Sens. Bernie Sanders (I-Vt.) and Elizabeth Warren (D-Mass.), whose support for “Medicare for All” is at odds with the union. The union said the bilingual candidate scorecard it distributed to members, which is critical of Sanders and Warren’s Medicare for All plans, is as close to an endorsement as the union will provide.

It is also likely a disappointment to former Vice President Joe Biden, who would be a natural choice for a union heavily composed of the working-class voters of color who form Biden’s base.

In what was perhaps an implicit acknowledgment of the unique relationship with Biden, he was the only candidate Argüello-Kline mentioned by name during her prepared remarks.

“We respect every single candidate right now. We know they are great people,” she said. “We know Vice President Biden for many years. We know he’s been our friend.”

Biden is due to visit the union’s Culinary Training Academy in North Las Vegas on Saturday. But Argüello-Kline and union spokeswoman Bethany Khan denied on Thursday that the appearance reflected any kind of partiality to Biden, noting that any of the Democratic candidates is free to visit the academy.

The union has held seven town halls for its members to hear from presidential candidates. Sanders addressed the union’s members on Dec. 10.

In addition, the nonendorsement creates an opening for other moderate contenders with whom the union is more aligned on health care policy. Former South Bend, Indiana, Mayor Pete Buttigieg and Sen. Amy Klobuchar (D-Minn.) won second and third places in the New Hampshire primary on Tuesday, potentially setting the stage to replace Biden as the moderate alternative to Sanders.

The endorsement of Culinary Union, which counts among its members 60,000 casino and hotel workers across Nevada, is highly coveted by Democratic presidential candidates. The union boasts a legendary turnout operation that helped hand the state’s caucuses to Hillary Clinton in 2016 and kept the state in the Democratic column in the general election, even as many traditional party strongholds fell to Donald Trump.

The Culinary Union’s endorsement announcement follows two days of tensions between the union and Sanders’ campaign revolving around the union’s objection to his Medicare for All plan. The union is one of several labor groups opposed to Medicare for All because it would mean forgoing private plans they have fought years to win in favor of an expanded public coverage program. 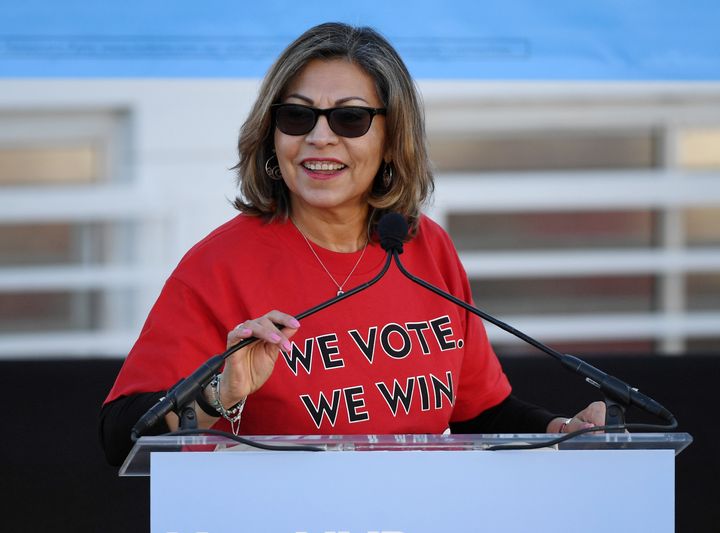 It emerged late on Tuesday that the union’s scorecard ― a caucusgoer education flyer it sent to its members ― stated that Sanders’ single-payer health care plan would “end Culinary Healthcare” and “require Medicare for All.” Its characterization of Warren’s Medicare for All plan, which would split the transition away from private coverage into a separate bill and has provisions designed to be more accommodating to unions with generous plans, was slightly less negative.

Sanders supporters fumed about the campaign materials, calling them misleading because they did not feature information about how Medicare for All would reduce out-of-pocket costs relative to the current plan and increase union leverage for non-health-care matters.

Their apparent protestations backfired however, when the union accused Sanders partisans of “viciously” attacking its members in a public statement. Khan, the union spokesperson, told HuffPost she had personally received numerous nasty phone calls. Many of the messages directed at the union were mean-spirited and profane, and some included racist, sexist and xenophobic rhetoric directed at the union’s majority-female, ethnically diverse membership, according to Khan.

Sanders’ rivals, including Warren, rushed to express solidarity with the union on Wednesday evening, seeking the moral high ground against a candidate with sterling pro-labor credentials.

Sanders found his own way to tout his friendship with the union without directly addressing the controversy. He tweeted a message of support on Thursday for the union in its ongoing contract fight with a Las Vegas hospital.

Asked by a reporter whether the tweet was enough, Argüello-Kline changed the subject to the union’s overall relationship with Sanders, noting that he had addressed the union and toured its health care center. “We respect Sen. Sanders,” she said.

Pressed to elaborate on the invective that Sanders supporters had directed at the union, Argüello-Kline again demurred.