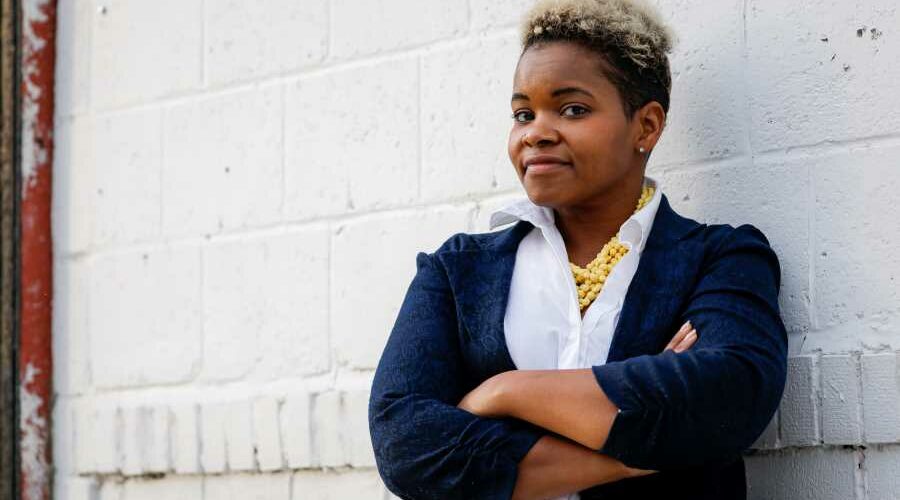 India Walton estimates there are at least 50 people walking around Buffalo with her art on their body.

Yes, the winner of last month’s Democratic primary for mayor of New York’s second-largest city was, for about six months, a tattoo artist. It was only one of several stops Walton made en route to her presumptive new role as America’s first socialist mayor in over 60 years. She’s also taken turns as a nurse, a union representative, an executive director of a nonprofit, and other more “wacky” titles, as she describes them. “I once thought I was going to have a career as a soap maker,” she says.

Walton’s background was one of the keys to her upset win over four-term incumbent Byron Brown, who has long been cozy with the state’s Democratic establishment, including Governor Andrew Cuomo. Walton now begins the push toward the general election in November. She’ll once again have to fend off Brown, who is launching a write-in campaign that could draw support from the city’s conservatives. “He didn’t take me seriously because for 16 years he’s been able to coast,” Walton says. “There hasn’t been a challenge mounted against him that was this expansive and this broadly appealing, and I think that he really believed I wasn’t a threat. Now he knows.”

A 38-year-old Buffalo native, Walton became a single mother at the age of 14, dropped out of high school, lived in a group home, and then earned her GED while pregnant with twins, who were born prematurely when Walton was just 19. She left her job as a nurse after 10 years to focus on organizing and advocating around a variety of causes touching on racial and economic inequities rampant throughout Buffalo, one of the poorest cities in the United States. Walton’s grassroots campaign was built around not only her understanding of the forces contributing to this poverty, but the ways in which she has experienced these forces. “I believe that the people closest to the problem are also those closest to the solution,” she said often during her campaign.

If Walton is able to win the general election, she’ll join progressives like Reps. Alexandria Ocasio-Cortez (a former bartender), Jamaal Bowman (a former school principal), and others who have parlayed their working-class experience to knock off entrenched Democrats. One thing a lot these insurgents share is that they identify as socialists. Walton, too, has embraced the term at a time when it has been weaponized by the right — and centrists like Brown — to attack public servants who, more than anything, just want to serve the public. “All we’re doing in this moment is claiming what is rightfully ours,” she boomed on election night. “We are the workers. We do the work. We deserve a government that works with and for us.”

Rolling Stone recently spoke with Walton about the s-word, her journey into politics, what the national progressive movement can learn from her grassroots campaign, and more.

Do you get tired of being asked about identifying as a socialist?
The honest answer is yes, but it is my job to explain what that means. I think on the progressive left we get caught up in a lot of jargon-y language that’s difficult for average people to understand. It’s my responsibility to explain to folks that being a democratic socialist does not mean that I’m interested in seizing people’s private property. It means that I put people at the center of my policies, that I am going to co-govern, that I expect to be held accountable by the people that I serve, and that the center of what I believe is that I am a servant. I am a leader, but first I am a servant. I am excited about bringing forth policies that are going to prioritize working class people, that are going to reduce poverty, that are going to illuminate the need for health care as a human right and housing as a human right, and help average people understand that rugged individualism is a myth. Hyper capitalism is not what is going to get us there. It’s love that that will.

What made you decide to get into politics after having been an activist and organizer for so long?
I have for a long time felt like I have a purpose in Buffalo. I come from a generation of folks that, if you graduate high school, college, you go to Charlotte, you go to Atlanta, you go to Seattle. But I always knew that I had a purpose here in Buffalo. I love the city so much. I knew that eventually I would play some role in making it better, but never in my wildest dreams that I think that it was in the office of mayor.

You’ve said you decided to run for mayor because of how poorly Buffalo’s current mayor, Byron Brown, handled both the pandemic and last summer’s Black Lives Matter demonstrations. In what ways do you think America has changed since George Floyd was killed?
America has changed because we are really having some difficult conversations surrounding race and policing. I think that especially here in Buffalo and in many other cities of similar size and demographics, a bigger part of the conversation needs to be about reimagining public safety as a whole, not only policing and the culture of policing, but also the culture in our communities and in addressing the community violence and prioritizing safety in ways that produce results, such as increasing educational attainment, such as providing more resources and reaching folks where they are so that we can have a community that’s safe and thriving in the absence of over-policing, which doesn’t work anyway.

How do you see the success of your campaign fitting into the national conversation?
Our campaign is 100-percent volunteer-run. It is truly grassroots. It is democratically governed. Our leadership makes decisions together. I think it’s just a perfect example of the United States that we want to see. It is proof that organizing still works and that you can win political campaigns that are deeply rooted and based in our values. This is a time for inclusion, for unification, and for prioritizing workers and poor people. I think that the country as a whole is waking up to the fact that when the least of us does well, then we all do better. The status quo is no longer acceptable and we are not going to continue to enrich the already wealthy. We’re ready to draw down power resources and put it into the hands of the people.

Brown has said he’s mounting a write-in campaign to challenge you in the general election. You were a massive long shot before you won the primary. Does being a big favorite change anything about how you approach the run-up to the general election?
It doesn’t change much. It does feel good, though. I’ll say that. It feels great. But even for the primary race, I ran like my life depended on it, right? Like, I literally had a concept for a podcast called “Running for Our Lives,” where I would explain all of the challenges that were happening during the campaign. I’m going to continue to keep my foot on the gas, to mobilize our more than 500 volunteers from all over the nation, to fundraise aggressively and take it seriously like I’ve always done. I think not only is that a winning strategy, but I also believe that the voters deserve it. They deserve a candidate who is going to earn their vote. That’s how you know that I’m going to go in and do a great job because I know who I’m going to be held accountable by.

A really touching moment on Election Day came when you called your mother after you learned you won the primary. What was that moment like? What did she say to you?
That’s nice, baby. That was her response. That is so classically my mom. She wants me to come visit her in Alabama. She wants me to leave like Friday, and I’m like, you do realize I’m in the middle of a historic run for mayor. She’s like, I don’t care, I gave birth to you. You better get down here. So my mother is unfazed by all of this.

What is your proudest moment?
Last year, my now-19 year-old son graduated from high school. They didn’t have a graduation. It was virtual, but I watched it on television. He was born at 24 weeks gestation, him and his twin brother. He weighed one pound, seven ounces, and I was told that he would never walk or talk. And last year he graduated high school. And that is probably the single proudest moment that I had in my life.

What is your biggest disappointment?
My biggest disappointment right now is the way I am being attacked personally after winning the primary. I’m like, hey, guys, I just want to take care of poor people and I don’t see anything wrong with that. But the response from people who are powerful and wealthy, this sort of panic, and painting of me as a crazy socialist. A local business person called me a dizzy idiot in the media. It’s just like, I’m a human being and I am doing this because I want what’s best for my community. I have some self interest in being mayor, but it’s not like some power-hungry, crazed lunatic. I gave a lot to make this happen. This is a radical act of love.

What gives you hope?
Knowing that the voters chose a Democratic, very progressive candidate as the primary election winner. That gives me hope that we are ready to start doing things right, not what is always politically expedient, but what is most beneficial to the majority of people in the city of Buffalo and all over the country. I hope that this is just the beginning of a trend of electing people who are from communities that are impacted and leadership that is empathetic and compassionate.

You’ve talked about how the people closest to the problem are closest to the solution. What is your advice for people like yourself who are close to the problem, but who have lost faith in the political process?
Don’t give up. I know it’s hard. It’s very difficult. I think the most impressive thing about this has been the outpouring of support from all over the state and country. There are some local leaders who’ve been supportive quietly. We’ve created such hostile environments in politics that sometimes people are afraid to do the right thing. But it is a new day. I will say to anyone who’s even flirting with the idea, reach out. You’ll be surprised at how welcoming electeds and people who run for office in other cities are in their support for you. There’s support. You can call me and I’ll tell you all about it.