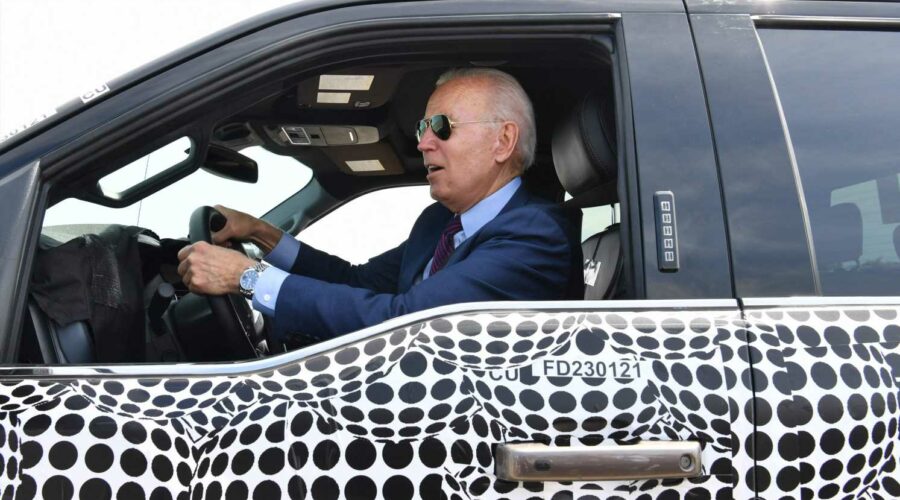 As he test-drove a new Ford electric truck Tuesday, President John Biden jokingly threatened to run over reporters who wanted to ask about the rising Israeli-Palestinian conflict.

The exchange came during an unscheduled stop at a Ford testing facility in Dearborn, Michigan, where Biden hopped in a new Ford all-electric F-150 Lightning pickup truck.

With Biden in the driver’s seat, reporters asked the president if they could inquire about Israel, which has been engaged in more than week of airstrikes with Hamas.

He then floored the gas pedal, later turning the truck around and honking the horn as he whizzed by.

Biden had just delivered a speech at a Ford factory to push for the transformation of electric vehicles through passage of his American Jobs Plan. The $2.3 trillion infrastructure plan would pump $174 billion into electric vehicles. Calling electric vehicles “the future of the auto industry,” Biden said the investments are needed to catch up to China in production and sales.

Biden is facing mounting pressure to help end the deadly conflict in the Middle East. Increasingly, Democrats have been divided over the consistent economic and military support the U.S. has provided Israel since its founding.

In a phone call with Israeli Prime Minister Benjamin Netanyahu on Monday, Biden expressed support for a case-fire, according to the White House, but he hasn’t insisted on one publicly. Biden officials have said the administration’s approach is through “quiet, intensive diplomacy.”

“He’s been doing this long enough to know that the best way to end an international conflict is typically not to debate it in public, so we will continue to remain closely engaged behind the scenes,” White House press secretary Jen Psaki told reporters aboard Air Force One while en route to Michigan.

While Biden was in Michigan, Pelosi issued a statement calling Israel “our friend and ally” and saying it is in the U.S. national security interest to support security in Israel.

“Now, after more than a week of hostilities, it has become even more apparent that a cease-fire is necessary,” Pelosi said. “There must be a serious effort on the part of both parties to end the violence and respect the rights of both the Israeli and Palestinian people.”

18/05/2021 Politics Comments Off on ‘I’m only teasing’: Biden jokes about running over reporters who ask about Israel as he test drives electric truck
Markets